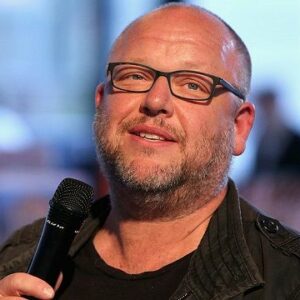 Black Francis is an American who sings, writes music, and plays the guitar. Charles Michael Kittridge Thompson IV took an early interest in music. With his friend Joey Santiago, bassist Kim Deal, and drummer David Lovering, he started the band Pixies. When the band’s mini-album “Come on Pilgrim” came out, he changed his name to “Black Francis.” “Surfer Rosa” was their first full-length record. Soon, other albums like “Bossanova” and “Trompe le Monde” came out with mostly his own lyrics to songs. Songs like “Debaser” and “Monkey Gone to Heaven” on the album “Doolittle” were praised by critics. After the Pixies broke up, he changed his name to “Frank Black” and made an album with Eric Feldman called “Frank Black.” The style of the songs on the album “Teenager of the Year” was very different. He started the band “Frank Black and the Catholics” with Lyle Workman, David McCaffrey, and Scott Boutier, and they put out an album with the same name. Some of his other well-known albums are “Pistolero,” “Dog in the Sand,” “Black Letter Days,” “Devil’s Workshop,” and “Show Me Your Tears.” He also made a few solo albums, such as “Christmas,” “Frank Black 93-03,” “Bluefinger,” and the “Svn Fngrs” mini-album.

Black Francis was born in Boston, Massachusetts. His full name is Charles Michael Kittridge Thompson IV. His father ran a bar and moved to Los Angeles, California, to learn more about the business. His parents broke up, and his mother married someone else.

He started listening to music when he was young, and by the time he was twelve, he could play the guitar. His stepfather was religious, so they joined a church that was part of the evangelical “Assemblies of God.”

In 1983, he finished high school and went to the University of Massachusetts at Amherst to study Anthropology. Joey Santiago, who he became friends with, turned him on to punk music.

He went there as part of a college exchange program. When he got home, he dropped out of college and went to Boston to be with Santiago. With Kim Deal on bass and David Lovering on drums, they formed the band “Pixies” in 1986.

“The Purple Tape” by Pixies came out in 1987. They got a recording contract with the English record label 4AD because of the demo tape. When they put out the mini-album “Come on Pilgrim,” he changed his name to “Black Francis.”

On their 1988 debut album, “Surfer Rosa,” he wrote and sang all the songs except “Gigantic,” which was co-written and sung by Deal. To get people to buy the album, the band went on a tour of Europe.
Between 1990 and 1991, the band recorded the albums “Bossanova” and “Trompe le Monde.” “Trompe le Monde” was his first album with Eric Drew Feldman, and it was about aliens and UFOs.

Beginning with the album “Bossanova,” he started writing all of the lyrics, which made him and Kim Deal fight. When things got bad, Pixies broke up in 1992.
In 1993, he put out the album “Frank Black” and even changed his name to Frank Black. Feldman produced it and played the keyboard and bass guitar. Nick Vincent played the drums, and Santiago was the lead singer.

In 1996, Rick Rubin’s “American Recordings” put out “The Cult of Ray” by Black. Lyle Workman played the lead guitar, David McCaffrey played the bass, and Scott Boutier played the drums.

They put out two albums in 2002, called “Black Letter Days” and “Devil’s Workshop.” The second one had a song called “Velvety,” which was a lyricized version of the Pixies’ “Velvety Instrumental Version.”

The Catholics’ sixth album, “Show Me Your Tears,” came out in 2003. The title song and other songs on the album were inspired by Black’s divorce. The Pixies said they would get back together and went on tour in the US, Canada, and Europe.

They recorded “Bam Thwok” by Kim Deal and put it on the “iTunes Music Store.” At the same time that the Pixies went on their reunion tour, the double album “Frank Black Francis” came out.
Black Francis released “Honeycomb” in 2005 with the help of Steve Cropper, Spooner Oldham, Reggie Young, Anton Fig, and producer Jon Tiven, all of whom worked in Nashville. Good things were said about it.

In June 2006, a double album called “Fast Man Raider Man” with the Nashville sessions men came out. He kept touring with the Pixies, and the Catholics stopped doing what they were doing.
In the fall of 2006, he went on a tour by himself. In December, he put out a collection of songs called “Christmas.” The next year, in June, “Frank Black 93-03” came out.

In 2008, he worked on the album “Art Brut vs. Satan” by the band Art Brut. In return, they helped out the Pixies at their show at the Brixton Academy. He also helped them make their album “Brilliant! Tragic!” with them.

The band “Grand Duchy” was started by Black and his wife, Violet Clark. Their first album, “Petit Fours,” came out in February 2009. After three years, the album “Let the People Speak” came out.

Under the name Black Francis, the album “NonStopErotik” came out in March 2010. The song “I Heard Ramona Sing” that he wrote was used in the movie “Scott Pilgrim vs. the World.”

In 2010, he worked with Reid Paley as Paley & Francis on their self-titled album. Paley and Black Francis sang and played guitar, and Spooner Oldham and David Hood played piano and bass, respectively.

The Pixies’ second album, “Doolittle,” came out in 1989. It was praised by critics. It had songs with lyrics by Black like “Debaser” and “Monkey Gone to Heaven.”

The song “Headache” was on Black’s second solo record, “Teenager of the Year,” which came out in 1994. It was a change in style, and it was about many different things.

Black, who used to go by the name Thompson, won “Teenager of the Year” before his senior year when he lived in Westport, Massachusetts. He then wrote a number of songs that would be on his albums later.

Black got married to Jean Black, but they later split up. He married Violet Clark after that. They have three kids together. Together with her two children from a previous relationship, they live in Hadley, Massachusetts.

A musician from the United States named Black Francis has a net worth of $5 million. Charles Michael Kittridge Thompson IV was born in Boston, Massachusetts, in 1965. When he played with the Pixies, he went by the stage name Black Francis.

He once said, “I don’t think morality comes from God or even from religion. I think it’s natural, built-in, and, to be honest, pretty damn clear. It’s clear that you shouldn’t steal, kill, or treat people badly.

Once, this musician put on an impromptu show at St. Stephen’s Green in Dublin, Ireland, and the Irish police took him away. He was freed in the end.