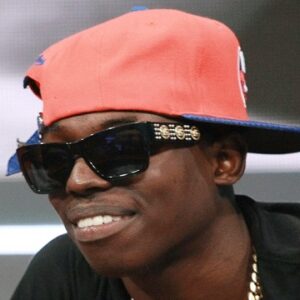 Ackquille Jean Pollard, renowned by his stage name Bobby Shmurda, is an American rapper and composer who attained immediate recognition after the video of his song ‘Hot Nigga’ went viral. His ‘Shmoney dance’ from the film became a rage countrywide, which helped him earn a record deal with Epic Records. His song has been remixed multiple times by a lot of famous musicians in the music industry, including Juicy J, French Montana, Lil’ Kim, Gunplay and T.I. Stars like Beyoncé and Jay Z have also made reference to his dance technique. As a child Shmurda earned various praises regarding his talent as a performer. However, it is only after reaching popularity did he recognize his potential and began to display his talent in numerous sectors. He wanted to rap, shoot videos, appear in movies – very basically become the next 50 Cent. Unfortunately, his career came to an abrupt halt after he was arrested on a number of offenses and was sentenced to 7 years in prison. However, his lawyer is confident that his sentence will be shortened owing to good behavior.

Bobby Shmurda was born on August 4, 1994, in Miami, Florida. His father is from Trinidad, while his mother is from Jamaica. He has an older brother named Javese Pollard.

In 1995, when he was just one year old, his father, Gervase Johnson, was sentenced to life in prison for attempted murder. His mother then relocated to the East Flatbush district of Brooklyn.

According to Shmurda, he grew up “in the wild”. He used to be out on the streets most of the time, getting up fights, typically with older children. He struggled from attention deficit disorder (ADD) at school, and would sometimes run out of class, doing his assignments in a hurry.

Shmurda used to make his own “crazy” versions of hit songs by 50 Cent and Jay Z. He was influenced by musicians like 2Pac, Biggie, Lil Wayne, Juvenile and Trick Daddy. In 2004, at the age of eleven, he remixed his debut song ‘Knuck If You Buck’ by Crime Mob.

He followed his older brother and his friends, who started selling narcotics when they were only in the 9th grade. As he would later disclose in his lyrics, he had been selling crack since he was in the fifth grade.

During his early days, he even encountered legal troubles a number of occasions. He was initially arrested on a firearms charge that was later dropped. However, he later broke his probation terms and ended up being incarcerated for 15 months.

Even though Bobby Shmurda began remixing songs when he was just 10 years old, his career took off in 2014, when he put the song ‘Hot Nigga’ on YouTube. He came up with the idea of the song after listening to Lloyd Banks’ ‘Jackpot’, which immediately enticed him with its groove.

He developed a music video and followed it with a performance of his characteristic ‘Shmoney dance’. The video gained over 2,000 views within a day and made him popular overnight. Soon, a lot of Viners started to replicate his steps, which gained him even more exposure.

He next started to perform on stage alongside Meek Mill, who reached out to him after the success of his song. He also performed with Fabolous, and singers like Yo Gotti and Lil Durk showed interest in working with him.
He has been a part of ‘GS9’, a rap group from Brooklyn, New York. The trio released a mixtape in July 2014 named ‘Shmoney Shmurda (Shmixtape)’, comprising tracks by Bobby Shmurda and others.

In July 2014, American rapper Jay Z mentioned ‘Shmoney dance’ in one of his songs during his ‘On the Run Tour’. His wife Beyoncé, on the same tour, showed some of the dancing movements during her performance of ‘Flawless’.
Soon later, Canadian rapper Drake utilized the song in his entrance at the ESPY Awards ceremony. Moreover, top artists like Juicy J, French Montana, Lil’ Kim, Gunplay and T.I. started to remix the song, adding their own verses to its lyrics. On July 22, 2014, he was signed by Epic Records for a record deal.

In August 2014, he did his ‘Shmoney dance’ on stage alongside Drake on his ‘Drake vs. Lil Wayne Tour’. He also featured on Rico Love’s tune ‘Bank Roll’.

He released a reggae remix of the song on August 29, 2014, featuring Junior Reid, Mavado, Popcaan and Jah X. On September 5, he released another official remix of the song, which had additional vocals from Chris Brown, Jadakiss, Fabolous, Rowdy Rebel, Busta Rhymes and Yo Gotti.

On November 10, 2014, he released his debut EP from Epic Records, titled ‘Shmurda She Wrote’. The EP contained the lead single ‘Hot Nigga’ and the promotional song ‘Bobby Bitch’.

He appeared as a guest on the television show ‘Real Husbands of Hollywood’ in the episode ‘Hart Medication: Part 1’ on season four of the show. The episode aired on September 1, 2015.

Bobby Shmurda, who is sometimes referred to as a one track wonder, is most famous for his song ‘Hot Nigga’. The accompanying music video, with ‘Shmoney dance’ choreographed by him, took the rap world by storm in 2014.

After Bobby Shmurda became famous, his manager advised him move out of Flatbush, Brooklyn, the area he grew up in. However, that was not enough for him to stay out of trouble. He got entangled in legal issues right after his rise to fame.

On December 17, 2014, he was arrested again, along with his ‘GS9’ band members including his older brother, for alleged involvement in a massive drug ring. He was charged with a number of criminal offenses, including conspiracy to commit murder, reckless endangerment, and drug and gun possession.

During this time, it was reported that his girlfriend, Kimberly Rousseau, was charged for smuggling a knife into jail after Shmurda was arrested. However, those close to Shmurda claimed that the rapper was single and the girl was just a fan.

He was convicted on September 2, 2016, after pleading guilty, and was sentenced to 7 years in prison. However, his sentence was reduced to five years, counting towards the sentence the two years he served awaiting trial.

Bobby Shmurda has a net worth of $400 thousand dollars as an American rapper. He is most known for his viral video “Hot N*gga,” which featured the “Shmoney Dance.” Shmurda is a rapper who is a part of the GS9 rap group (Grimy Shooters).

Ironically, Bobby Shmurda was arrested for crimes he often mentioned in his lyrics. Some think that his sudden rise to fame also led to his quick arrest, as it has been reported that the New York detectives follow rap videos on YouTube to monitor street gangs.