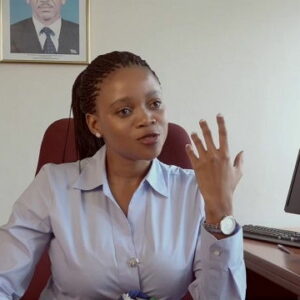 On April 4, 2018, the incoming president, Mokgweetsi Masisi, selected Bogolo Joy Kenewendo, a Motswana economist and politician, as the new Cabinet Minister of Investment, Trade, and Industry in the Cabinet of Botswana. She was appointed as the youngest minister in Botswana’s cabinet at the age of 30. She had been appointed by former president Ian Khama to the position of Specially Elected Member of Parliament in October 2016, where she was at the time of her appointment. Since October 2015, she has worked as a trade economist for the Ghanaian Ministry of Trade and Industry. Since graduating from college in 2009, she has spent more than six years working as an economist and consultant with the Gaborone-based think tank Econsult Botswana (Pty) Ltd. She was one of the first young people from Botswana to represent their country at the UN General Assembly. When she met Michelle Obama, the first lady of the United States, in 2011, she was inspired to start the Women Leadership and Mentorship Program, Malaya Kgosi, with a friend. Michelle Obama was hosting the Young African Women Leaders’ meeting at the time.

Around 1987, Bogolo Joy Kenewendo was born in the Boteti Area’s Motopi Village, Botswana. She enrolled in the University of Botswana in 2005 after finishing her foundational coursework from local institutions in order to earn her bachelor’s degree in economics. From there, she spent the 2007–2008 academic year as an exchange student at Pitzer College in Claremont, California, in the US.

In 2009, she graduated from the University of Botswana with a degree in economics. She studied at Xpert Academy in 2011 to get ready for the Project Management PRINCE2 Practitioner exam, and she received her certification the same year. She received a Chevening Scholarship the following year and enrolled in the University of Sussex in the UK, where she earned her Master of Science in International Economics with a focus on trade and economics in 2013.

Bogolo Joy Kenewendo joined Imani Development as a research assistant in September 2009, following the completion of her college studies, and worked on the study “The impact of the Financial crisis on Southern African Development Community countries; Botswana” for the following four months.

Her duties there included gathering information for the study through desk research, key informant interviews, and data analysis, as well as getting ready for a stakeholder workshop where the findings would be presented. She worked for UNIDO as an expert on industrial policy research and analysis for eight months starting in May 2010, where she helped to write the 2011 Industrial Development Policy for Botswana.

She began working as a research assistant for Health and Development Africa in December 2010 to conduct field research on the impact of HIV/AIDS on the public sector in Botswana. She had to complete this assignment while gathering data from several Botswana regions and doing key informant interviews in government ministries. She had to do this both in her native Setswana language and in English.

She became a columnist for “The WeekendPost Botswana” in April 2012 and began publishing a biweekly column on urgent and current economic topics. She held that role for more than a year before switching to the private sector company Econsult Botswana (Pty) Ltd. as an economist and consultant.

She received an Overseas Development Institute (ODI) Fellowship in October 2015, which allowed her to travel to Ghana and work as a trade economist in the country’s ministry of trade and industry. In that capacity, she supported Ghana’s membership in ECOWAS, contributed to bilateral trade agreements and WTO issues, and suggested the interim Economic Partnership Agreement (EPA).

Bogolo Joy Kenewendo was recognized as one of the “Ten Outstanding Young Persons” by JCI Botswana in 2012 for her contributions to politics and economics. She advanced through the ranks and was elected to the Botswana parliament in 2016, earning her the “Botswana Change Makers Award” in business and leadership as well as the “Formidable Woman” award.

Her accomplishments weren’t well publicized in the international media, but that all changed the moment she was named the Minister of Investment, Trade, and Industry on April 4, 2018. She quickly rose to fame online as the youngest minister in Botswana’s history, with young Africans sharing their surprise and pleasure over her selection on social media.

Her substantial portfolio was quickly covered in-depth by news organizations throughout the world, which helped to convince many who were hesitant about a young woman taking over such a significant role that her new appointment was appropriate.

Bolo’s Personal Life Joy Kenewendo cites her mother as one of the people who has most inspired her for her strength and willingness to embrace new experiences despite having suffered many strokes and losing a child right in front of her. In her free time, Bogolo enjoys reading, traveling, and meditation.