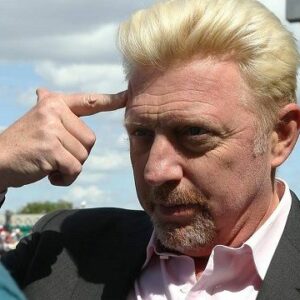 Boris Franz Becker is a tennis player who has had a lot of success. He was the youngest player to win the Wimbledon men’s singles tournament at the age of 17. He was also the first unranked player to win the title, as well as the only German to do so. Becker also won five Grand Slam titles, 13 Masters Series titles, three Open period finals (ATP Tour Finals, WCT Finals, Grand Slam Cup), and the Olympic doubles gold medal. Becker excelled on fast surfaces, like grass and indoor carpet. ‘Tennis’ magazine named him as the 11th best male player from 1965 to 2005. Becker has been building his tennis equipment and apparel business, Boris Becker Sports, since his retirement. His personal life has been riddled with scandals. He was accused of evading taxes. He avoided prison, but not without a criminal record. In his autobiography, ‘Boris Becker: The Player,’ he discussed his marriage and divorce from model Barbara Feltus, as well as his substance usage.

Boris Becker was born in Leimen, Germany, on November 22, 1967, to architects Karl-Heinz Becker and Elvira Becker.

Becker learned to play tennis as a child at his father’s tennis club (Blau-Weiss Tennisklub) in their town.
Boris began playing competitively at the age of eight, and by the age of eleven, he was competing in the adult divisions. Gunther Bosch was his mentor.

In 1984, he hired Ion Tiriac, a well-known coach, as his manager. He won his first doubles title in Munich the same year.

Boris Becker won the Tennis World Young Masters in Birmingham in 1985 and his first top-level singles victory at Queen’s Club in June.

His first breakthrough occurred on July 7, 1985, when he defeated Kevin Curren to become the first unseeded German player to win the Wimbledon singles title.

Becker successfully defended his Wimbledon championship in 1986, defeating Ivan Lendl in the final in straight sets.
In the second round at Wimbledon in 1987, he was upset by Peter Doohan, the world no. 70 player.
Becker and John McEnroe set a record in the 1987 Davis Cup by playing one of the longest matches ever, which ended with Becker’s triumph.

In 1988, Becker helped West Germany win the Davis Cup for the second time, as well as the year-ending Masters title in New York City and the World Championship Tennis Tour’s season-ending WCT Finals.

He won two Grand Slam singles titles in 1989, as well as the Wimbledon and US Open finals. In the same year, he defeated Andre Agassi to win the Davis Cup for the second time.

He lost the Wimbledon final and failed to defend his US Open championship in 1990, which was a dismal year for him.
He won the Australian Open final for the first time in 1991, claiming the world number one rating.

Becker won the men’s doubles gold medal at the 1992 Olympic Games in Barcelona alongside Michael Stich. He also won the ATP Tour World Championships in Frankfurt at the end of 1992 year.
Becker fell to Pete Sampras in the 1995 Wimbledon final but fought back in the rankings by winning the year-end ATP Tour World Championships for the third and last time in Frankfurt.

Becker earned his sixth and final Grand Slam title in 1996, when he defeated Michael Chang in the Australian Open final.

He won the Queen’s Club Championships for the fourth time in 1996, however, due to a wrist fracture, he was unable to compete in the Wimbledon final. He won the Grand Slam Cup later that year, defeating Goran Ivanisevic in the final.

In the quarterfinals of Wimbledon in 1997, he was defeated by Pete Sampras.
Boris Becker last competed at Wimbledon in 1999, losing to Patrick Rafter. On June 25, 1999, he announced his retirement.

Becker has been the owner of Völkl Inc.’s tennis section since 2000.
He has been a Wimbledon analyst with the BBC since 2003.
He also serves on the advisory board of Bayern Munich, a German club.

Becker married actress and designer Barbara Feltus on December 17, 1993. Noah Gabriel and Elias Balthasar were the couple’s two sons. After Barbara learned about Becker’s child outside the marriage, the pair split on January 15, 2001.

Becker acknowledged the paternity of a daughter, Anna, in February 2001, the consequence of a sexual experience with Russian model Angela Ermakova in 1999.

Boris Becker is a $10 million net worth former German professional tennis player and current instructor. Becker rose to the top of the world rankings almost immediately after starting his tennis career, and he became a successful tennis player in an astonishingly short amount of time. Despite this, Boris later faced financial and legal difficulties. Following his retirement, Becker went on to train some of tennis’ biggest future talents.

He declared in 2013 that he will launch the International Premier Tennis League, which would feature mixed teams of elite players.

He lives in Munich, Monaco, and Schwyz, as well as London and Miami.