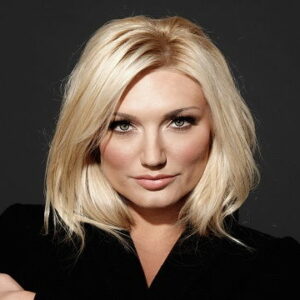 Brooke Hogan is a reality television celebrity, singer, actress, and professional wrestler from the United States. Daughter of the famed wrestler Hulk Hogan, Brooke’s television series ‘Hogan Knows Best’ earned great popularity. Brooke and her family were featured in the series, which depicted her challenges and family life. 2006 saw the publication of her debut studio album, ‘Undiscovered,’ which garnered her enormous popularity. Due to family issues, ‘Hogan Knows Best’ had to be canceled, but this led to the creation of ‘Brooke Knows Best’. This was a commercial triumph as well. She also experimented with wrestling. Brooke studied a variety of professions to demonstrate her potential and abilities. Additionally, she has appeared in various low-budget films and television programs. The 2009 release of her second studio album, The Redemption, was not as successful as her debut. Currently, Brooke Hogan is putting the finishing touches on her new EP of country music.

Brooke Hogan was born on May 5, 1988, in Tampa, Florida to the well-known wrestler Hulk Hogan and Linda Claridge. Nick Hogan, who is her younger brother, is also an actress.

She was drawn to music and dancing from a young age onward. During high school, she attended dance classes and piano lessons. She studied gymnastics as well.

She was a member of the Clearwater Central Catholic High School cheerleading squad, where she studied for only the first semester of her freshman year. Here, she sang the whole chorus.

In 2002, Brooke Hogan began her career by signing with Trans Continental Records. The album’s track “Everything to Me” was an instant hit when it was released in July 2004. It was ranked one on the Hot Singles Sales chart in the United States. It also landed at number 97 on the Billboard Hot 100.

She toured around the United States with Hilary Duff for the ‘Most Wanted Tour’ from the middle to the end of 2004. During the same time period, she toured alongside the Backstreet Boys on their Up Close & Personal Tour.

Together with her father, she featured in the hour-long television special “(Inside) Out: Hulk Hogan, Stage Dad.” The special highlighted Brooke’s preparation for her debut record, as well as her father’s involvement. This was an instant hit and provided Brooke’s nascent music career the expected boost.

In July 2005, a full television series titled “Hogan Knows Best” was launched as a result of the popularity of the special session. The show was based on Brooke Hogan’s family life and received tremendous ratings. In the program, Hulk was portrayed as a stern father who monitored his daughter’s whereabouts by installing a GPS tracker on her automobile. Before her eighteenth birthday, he was stringent about her dating, then he eased up.

Brooke Hogan was the first artist to sign with Scott Storch’s record label, Storch Music Company, in 2006. (SMC).
The album’s main single, “About Us,” debuted on the season two finale of “Hogan Knows Best.” It quickly rose to the 33rd spot on the Billboard Hot 100 chart as a result of its widespread appeal.

On October 24, 2006, she released her album “Undiscovered” in the United States and Canada. Even though the album only sold 127,000 copies in the United States, it topped the Independent Albums chart in the country. Additionally, it ranked 28th on the Billboard 200.

In November 2006, Brooke promoted her record by appearing on the cover of FHM.
2007 saw the release of her second single, Heaven Baby, which featured Beenie Man. She also released a promotional single titled “For A Moment” on the album.

Clippings from the third and fourth seasons of “Hogan Knows Best” were included. She announced in August 2007 that she was leaving SMC and obtaining a dual contract with Fontana Records and SoBe Entertainment.

Brooke’s career took another significant turn when the ‘Hogan Knows Best series was canceled due to family concerns. While she was working on her second album, this occurred. Later, VH1 approached her with an offer to star in her own series, ‘Brooke Knows Best.’

The two-season run of ‘Brooke Knows Best’ began on July 13, 2008, and concluded in 2009. The series depicted Brooke’s tribulations, including her singing career, her parent’s divorce, and her brother’s arrest following a vehicle accident in which he permanently damaged his buddy.

On March 31, 2009, Brooke Hogan released the lead single ‘Falling’ from her second studio album ‘The Redemption’ As a result, she released another track titled “Hey Yo!” and a mixtape titled “Judgement Day.” Released in the United States and Canada on July 21, ‘The Redemption’ debuted at number 27 on the Independent Albums chart and number 144 on the Billboard 200.

Brooke Hogan had a brief stint in wrestling. She was featured on the July 15, 2006, episode of “Saturday Night’s Main Event.” She promoted the female wrestling division on Total Nonstop Action Wrestling Thursday programs throughout the middle of 2012.

The 2006 publication of Brooke Hogan’s debut album, titled “Undiscovered,” was met with instant success. About Us, the album’s lead track was an instant hit.

The television series ‘Hogan Knows Best and its sequel, ‘Brooke Knows Best,’ was her most notable work. Both of the shows depicted Brooke’s life and hardships and garnered good ratings.

Despite the fact that her second album, ‘The Redemption,’ was not as popular as her first, it debuted at number 27 on the Independent Albums list with 3,381 copies sold in its first week.

The first artist signed by Storch Music Company is Brooke Hogan. The main track “About Us” from her debut album “Undiscovered” achieved great ratings and landed at number 33 on the Billboard Hot 100.

Brooke Hogan had a relationship with the black rapper Yannique Barker in 2006. The relationship terminated as a result of Hulk Hogan’s racist statement against Barker.

In June 2013, she disclosed that she was engaged to retire at American football center Phil Costa; however, the engagement was broken off in November 2013.

American singer, actress, model, socialite, and television personality Brooke Hogan has a net worth of $4 million. She is the eldest daughter of retired professional wrestler Hulk Hogan, and from 2005 to 2007 she starred in the reality television series “Hogan Knows Best.”