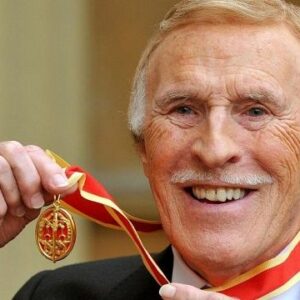 Bruce Forsyth was a British actor, comedian, presenter, dancer, singer, and playwright. His real name was Bruce Joseph Forsyth-Johnson. He spent more than 75 years working in the entertainment business and even set a Guinness World Record for the longest TV career for a male entertainer. Sunday Night at the London Palladium, The Bruce Forsyth Show, The Generation Game, You Bet, Play Your Cards Right, and Bruce’s Price Is Right, to name a few, were just a handful of the shows Forsyth helmed throughout his career. Additionally, he co-hosted other programs, including “Strictly Come Dancing,” “The Royal Variety Performance,” and “Bruce and Ronnie.” The albums “The Musical Side of Bruce,” “Come Get It,” “Mr. Entertainment,” and “These Are My Favorites” were all released by Forsyth as a singer. In addition, he played a part in a number of top hits, such as “I’m A Good Boy,” “Saturday Sunshine,” “I’m In Charge,” “I’m Backing Britain,” and “Didn’t He Do Well.” In his lifetime, the British artist was married three times and the father of six children.

At the age of 14, Bruce Forsyth debuted his performance, “Boy Bruce, the Mighty Atom,” in the entertainment industry. At the Theatre Royal in Bilston, he performed on stage for the first time. He performed on television for the first time in 1939 on the talent program Come and Be Televised. Then, in 1958, following a performance alongside Dickie Henderson, Forsyth was given the chance to host the program “Sunday Night at the London Palladium.”

The British performer appeared on stage a lot in the 1960s. He made an appearance in the musical “Little Me” and then worked on the musical movie “Star.” In 1968, he cut the single “I’m Backing Britain.” Forsyth presided over “The Generation Game” from 1971 until 1977. He performed “Bruce Forsyth’s Big Night” the following year. Then he hosted the game program “Play Your Cards Right” from 1980 to 1987 and again from 1994 to 1999.

He served as the host of “Bruce Forsyth’s Hot Streak” on ABC in 1986. He was also chosen for the comedy “Slinger’s Day” that year. The British host of the program “You Bet” hosted it from 1988 until 1990. He received the third edition of “The Price Is Right” five years later. He appeared as a special guest presenter on the game program “Have I Got News for You” in 2003. After thereafter, Forsyth co-presented “Strictly Come Dancing” from 2004 through 2013. In 2011, he issued a CD titled “These Are My Favorites” that had a number of tracks.

In Edmonton, Middlesex, England, on February 22, 1928, Bruce Joseph Forsyth-Johnson, son of Florence Ada and John Thomas Forsyth-Johnson, was born. John, one of his brothers, served as a pilot in the Royal Air Force. He went to the Latymer School to study.

The British performer had three daughters with Penny Calvert during their marriage, Julie, Laura, and Debbie, which lasted from 1953 to 1973. Forsyth wed Anthea Redfern in 1973. Before divorcing in 1979, the couple had two children, Louisa and Charlotte. Forsyth then wed Wilnelia Merced in 1983, and the two had a son they named Jonathan Joseph. The two stayed together until Forsyth’s passing in 2017. Forsyth passed away on August 18, 2017, from bronchial pneumonia. He was 89.

Sir Bruce Forsyth was a British host and performer who, at the time of his passing, had a fortune of $25 million. Born in Edmonton, Middlesex, England, Sir Bruce Forsyth is also known as Sir Bruce Forsyth-Johnson. After witnessing Fred Astaire in primary school, he started taking dance lessons and, in his early teens, started traveling with a one-man song and dance performance.