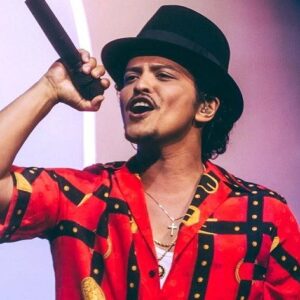 Bruno Mars is a Grammy Award-winning singer-songwriter whose super-hit singles “Just the Way You Are,” “Grenade,” and “Locked Out of Heaven” catapulted him to fame. He is without a doubt one of the best-selling artists of all time, having sold over 11 million albums and 68 million singles worldwide. He is noted for his showmanship, which makes him a very entertaining stage performer in addition to being a terrific singer. He was musically inclined from an early age, which is not surprising given his family’s musical background. He began composing music when he was a small child, after being exposed to a broad mix of reggae, rock, hip hop, and R&B. He performed at many musical venues in his hometown throughout his boyhood, and he had no doubt that he would grow up to be a professional musician. He was born in Hawaii and traveled to Los Angeles to pursue his musical dreams. He failed to make a name for himself as a vocalist at first, so he turned to songwriting for a living. Eventually, he published his debut album, ‘Doo-Wops & Hooligans,’ which became a great smash and launched his illustrious singing career.

He was born on October 8, 1985, in Honolulu, Hawaii, as Peter Gene Hernandez. His father, Latin percussionist Peter Hernandez, and mother, Bernadette “Bernie” San Pedro Bayot, were both singers and cum dancers. As a kid, he was known as “Bruno.” He is one of five siblings.
From a young age, his parents exposed him to a wide range of musical styles. Because both of his parents were professional actors, he was naturally drawn to the performing arts. When Bruno was three years old, one of his uncles, an Elvis impersonator, urged him to appear on stage. He began performing with his family band soon after and became well-known in his community for his Elvis Presley impersonation.
President Theodore Roosevelt High School was his alma mater, and he graduated in 2003. He used to be a member of a group named The School Boys when he was in school.

Bruno Mars came to Los Angeles, California, to pursue a musical career shortly after graduating. During this time, he took on the stage name “Bruno Mars.”
He signed with Motown Records in 2004 and, despite the fact that the agreement did not work out, he was able to meet songwriter and producer Phillip Lawrence, who was also signed to the same label.
In 2006, Lawrence introduced Mars to Aaron Bay-Schuck, his future Atlantic Records A&R manager. He was soon signed to Atlantic Records, and his career took off from there.
In addition to his singing career, Bruno Mars founded The Smeezingtons, a songwriting and record production duo, alongside Philip Lawrence and Ari Levine in 2009. Since its beginnings, the squad has grown in popularity and has been in high demand. The group has collaborated with a wide range of musicians and has won a number of popular honors, including the ASCAP Pop Music Awards for Songwriters.
He released his first solo song, “Just the Way You Are,” in July 2010 off his debut studio album, “Doo-Wops & Hooligans,” which was released in October after a few months. The song reached the top of the Billboard Hot 100 chart. Bruno Mars’ record was dubbed “the year’s best pop debut” and launched him to international fame.
‘Unorthodox Jukebox,’ his much-anticipated second album, was released in December 2012. “Locked Out of Heaven,” the album’s debut single, topped the Billboard Hot 100 for six weeks in a row and reached the Top 10 in 20 countries, making it a big international hit. This record was a critical and economic success as well.
In June 2013, he embarked on a tour, The Moonshine Jungle Tour, following the remarkable success of his record. He began his journey in North America and continued across Europe and Oceania before returning to North America in October 2014.

‘Doo-Wops & Hooligans,’ his debut album, has been certified 39 times platinum worldwide and has sold over 45 million singles. “Just the Way You Are,” “The Lazy Song,” and “Count On Me” were all major singles from the album. Like its predecessor, his second album, ‘Unorthodox Jukebox,’ was a major smash, exploring a variety of styles such as reggae rock, disco, and soul music. The album opened at No. 2 on the Billboard 200 in the United States, later reaching No. 1. It was also well-received by music critics.

Bruno Mars was nominated for five BRIT awards and won three of them, including two in the category International Male Solo Artist in 2012 and 2014.
He has been nominated for 18 Grammy Awards, winning two: Best Male Pop Vocal Performance in 2011 for “Just The Way You Are” and Best Pop Vocal Album in 2014 for “Unorthodox Jukebox.”
He’s also won 14 ASCAP awards, including three for Most Performed Song in 2014 for “Locked Out of Heaven,” “When I Was Your Man,” and “Treasure.”

He was once romantically linked to Rita Ora, a singer and actress whom he met in 2009. However, due to job obligations, the couple divorced in 2011. In 2011, he began dating model Jessica Caban.

Bruno Mars’s net worth is believed to be $175 Million.

He has established a GRAMMY Camp Scholarship Fund in collaboration with the Hawai’i Community Foundation and the GRAMMY Foundation in order to provide financial help to the next generation of music makers.