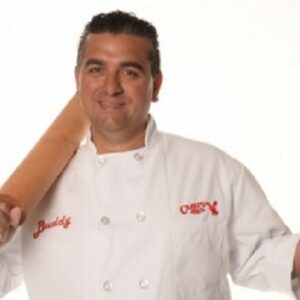 Buddy Valastro, sometimes known as Bartolo Valastro Jr., is an Italian-American celebrity chef, entrepreneur, television personality, and author. He is the owner of Carlo’s Bakery and the face of Buddy V’s Ristorante. He is most known for his role as the reality star of the television shows ‘Cake Boss’ and ‘Kitchen Boss.’ In the film ‘Bridesmaids,’ the popular chef had a cameo appearance in a kitchen baking sequence that included only his hands. He’s also appeared on ‘The Next Great Baker,’ ‘Buddy’s Bakery Rescue,’ ‘Battle of the Cooks,’ and ‘Buddy’s Family Vacation,’ among other shows. Valastro has also been on ‘Food Network Challenge’ as a guest mentor and as a guest judge on ‘The Apprentice.’ Currently, he can be seen hosting the shows ‘Battle of the Bakers’ and ‘Bakers vs. Fakers.’ Valastro is also a talented writer, having published the book ‘Cake Boss, Stories and Recipes.’

At the age of 11, Buddy Valastro began working at his family’s bakery, ‘Carlo’s Bakery.’ Bartolo Valastro Sr., his father, was a baker who purchased the baking shop in 1964. Buddy followed in his father’s footsteps, collaborating with him to manage their shop together. His father died when he was 17 years old, and he was left with complete responsibility for the family bakery. Buddy realized his father’s aim of making Carlo’s Bakery a household name after a lot of hard work.
His business became well-known for its exquisite wedding cakes. Buddy’s works were published in various bridal magazines as a consequence of this. As a result of this exposure, he was invited to participate in the ‘Food Network Challenge’ in 2007. After that, Buddy was approached by others who wanted him to start his own show. He then exploited his contacts to establish the reality show “Cake Boss,” in which he, his mother, and four sisters star. This show was an instant hit, propelling the chef to new heights of celebrity. The eighth season of ‘Cake Boss’ is presently running on TLC.
As a result of the show’s success, Buddy Valastro opened Carlo’s Bakery in a number of other cities. The bakery now has seven locations in New Jersey, as well as many more throughout the United States. In 2010, the American chef went on the ‘Bakin’ with The Boss Tour,’ a live interactive event. He cooked pastries and spoke anecdotes about his Italian family during this event. Buddy V’s Events, an event planning and catering company that specializes in catering to family gatherings as well as preparing events such as weddings and galas, was founded by him in 2014. Buddy worked on a campaign with Whole Earth Sweetener Co. two years later.

Valastro was arrested in 2014 for driving while under the influence of alcohol. His driver’s license was suspended for 90 days as a result of this occurrence. He was also had to pay a $300 fine.

Buddy Valastro was born in Hoboken, New Jersey, on March 3, 1977, as Bartolo Valastro, Jr. to parents Bartolo Valastro, Sr. and Mary Valastro. He is the youngest of four sisters. Buddy has a stepfather as well. In 2001, Valastro married Elisabetta “Lisa.” Carlo, Marco, and Buddy Jr. are the couple’s three sons, while Sofia is their daughter. The celebrity chef lived in East Hanover Township, New Jersey, until 2014, when he relocated to Montville.