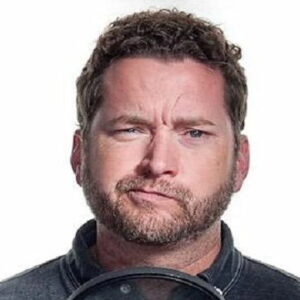 Michael Justin Burns (Burns) is a well-known American writer, actor, producer, host, comedian, and director. He is best known as the co-founder of Rooster Teeth, a production firm. Burnie is recognized for altering the media industry in part through popularizing Machinima, a technology that employs computer graphics engines to create cinematic productions. In the domains of hosting and podcasting, where he is well-known, he has also established himself. Red vs. Blue: The Blood Gulch Chronicles, his first significant work, was a web serial that made Burnie an online phenomenon overnight. The series was produced with the help of the popular game Halo and was praised for its wicked sense of humor and its inventiveness. Burns was hired by Electronic Arts, a video game creating business, to create a promotional movie for their upcoming game “The Sims 2.” Burns subsequently starred in the film “Lazer Team,” which he also co-wrote. In 2015, The Hollywood Reporter, a multi-platform magazine, acknowledged his remarkable talent by naming him one of the “Top 25 Digital Stars.”

Burnie Burns was born in New York on January 18, 1973, but his parents immediately relocated to Texas, where he was raised. The fact that Burnie’s father was a renowned scientist was essential in his early fascination with science fiction.

Burnie desired to study physics but was more interested in a career in medical science. During his final year of high school, he spent most of his time working at a hospital and learning the fundamentals of medical practice.
However, he quickly had a change of heart and shifted his focus from medical science to something more captivating.

After completing high school, he enrolled at the University of Texas, from where he received a Bachelor of Arts in computer technology.

During his time at the university, his passion for movies and television transformed, prompting him to join Texas Student Television (TSTV). His peers and he discovered that he had a natural talent for fiction when the series he developed became the longest-running serial ever established by a student. His show was dubbed “Sneak Peek,” and one of his guests was the well-known actor Adam Sandler.

During his final years at the university, Burns yearned to direct a feature film. Together, he and a group of his classmates raised $9,000 and began production on a film entitled “The Schedule.” Although the picture was well-received at several film festivals, when it was released in theaters it was a massive box office failure.

Burns relocated to Los Angeles in the early 2000s and began working for a computer support firm after being dissatisfied with the film’s reception. After a few years, he established the basis for his business, Rooster Teeth.

Burns, together with a couple of his buddies, created a trailer for “Red vs. Blue” in 2002. However, production difficulties prevented the series from reaching screens. Burns then took it upon himself to produce the series and, with the help of his friends and coworkers, founded the firm Rooster Teeth.

In 2003, the first episode of the series aired. In comparison to its contemporaries, the series was extremely distinctive. The bulk of the audience was introduced to the concept offered by the presentation. Burns created a unique look by mixing video game footage with fascinating voice-overs and sounds.

The series ‘Red vs. Blue,’ which was originally intended to be a short film, became an internet sensation, and its comedic element further added to its success. The majority of its crew members quit their day jobs and began working full-time on the series.

It was originally supposed to be a one-season show, but as its popularity grew, its creators opted to end it with an open ending. In order to increase the series’ popularity, the producers began selling goods related to the show.

In 2005, the crew produced a second series entitled The Strangerhood. This time, Burnie collaborated with the game publisher Electronic Arts in order to advertise their new game “The Sims 2.” The agreement was extremely favorable for both sides.

The next year, a new series titled “P.A.N.I.C.” was produced. The five-part series served as a promotional tool for the upcoming video game F.E.A.R.
For the promotion of the video game ‘City of Heroes,’ Burns attempted live-action for the first time. The audience response was positive, prompting Rooster Teeth to create its own live-action series.

Burns and his coworkers filmed parodies of office life for the live-action comedy series ‘Rooster Teeth Shorts’.
In 2008, Burns was requested to emcee the podcast premiere of the first episode of ‘Drunk Tank’ due to his notoriety in the comedy world.

In 2011, the program was renamed “The Rooster Teeth Podcast” in recognition of its immense popularity. While overseeing the podcast’s production staff, Burns also made guest appearances that increased his notoriety among a large number of listeners.
Burns was then chosen to host a number of shows, including ‘Immersion,’ ‘The Gauntlet,’ and ‘Million Dollars, But.’

In 2012, Burns assumed responsibility for the production of the documentary Minecraft: The Story of Mojang. The documentary was based on the popular Swedish video game developer Mojang, which created the world-renowned game Minecraft.

Burns subsequently moved his attention to the production of a feature film. Due to the lack of financial assistance from Hollywood, he devised the concept of a crowdfunding campaign for his film “Lazer Team.”

Within the first two days of launching the campaign, the campaign raised more than $2 million, shattering all prior fundraising records. Interestingly, the intended goal of the campaign was to raise approximately $700,000 USD. In addition to playing a big role, Burns co-wrote and co-produced the science fiction comedy.

Since then, Burns continued to appear in numerous films and television series as a guest star. In 2016, he also served as executive producer for the critically and commercially acclaimed video game RWBY: Grimm Eclipse.

Burnie Burns dated Jordan Burns for an extended length of time prior to their 2000 wedding. 2011 marked the conclusion of a long relationship between the pair. According to sources, their split was acrimonious, despite their mutual assertions that they maintain cordial relations.

Burnie was dating ‘The Know’ anchor Ashley Jenkins in 2015, according to rumors that arose at the time. In 2016, the couple formalized their romance by announcing their engagement.

Burnie has not yet moved to Los Angeles and prefers to remain in his hometown. Only recently has he considered relocating his base of operations.

Burnie Burns is an American filmmaker with an estimated net worth of $5 million. Born in Rochester, New York, Burnie Burns grew up in Houston, Texas. He graduated from the University of Texas at Austin with a Computer Science degree.