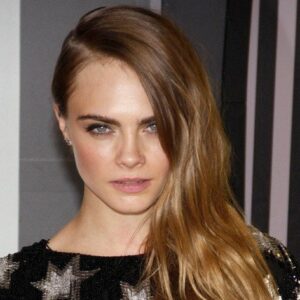 Cara Jocelyn Delevingne is an English fashion model and actress who began her career in the modeling industry while she was in her teens. Following graduation, she signed with ‘Storm Model Management,’ a London-based modeling agency. She then went on to become the face of Burberry’s spring/summer 2011 and 2012 campaigns, as well as winning the ‘Model of the Year’ title at the ‘British Fashion Awards’ twice in 2012 and 2014. She walked the runways for brands such as ‘Burberry,’ ‘Dolce & Gabbana,’ ‘Moschino,’ ‘Fendi,’ and ‘Mulberry,’ as well as fashion and costume designers like Jason Wu and Oscar de la Renta. She has also appeared on the covers of fashion magazines such as ‘Vogue’ UK, ‘Russh’, ‘i-D’, ‘Jalouse’, and ‘Love,’ as well as in advertisements for brands such as Chanel, Zara, and H&M. She made her cinematic debut in the historical romance picture ‘Anna Karenina,’ and after a few more roles, she landed in the film ‘Paper Towns,’ playing one of the primary characters. ‘Suicide Squad’ and ‘London Fields’ are two of her other notable flicks. In their 2013 list of ’50 Top Models,’ she was placed number 17 by fashion news site models.com. ‘Valerian and the City of a Thousand Planets,’ a science fiction action picture, and historical drama ‘Tulip Fever,’ are two of her future films.

She is the youngest of three daughters born to Charles Hamar Delevingne and Pandora Anne Delevingne (née Stevens) on August 12, 1992, in Hammersmith, London, United Kingdom. Her father works as a property developer in England.
Hamar Greenwood, 1st Viscount Greenwood, her paternal great-grandfather, was a Canadian-born British lawyer and politician who served as the last Chief Secretary for Ireland from 1920 to 1922.
Sir Jocelyn Stevens, chairman of ‘English Heritage’ and a publishing executive, was the grandson of newspaper proprietor Sir Edward Hulton, 1st Baronetan. Princess Margaret’s lady-in-waiting was Janie Sheffield, her maternal grandmother.
Her older sisters are Chloe and Poppy Delevingne, the latter of whom is an English model.
Nicholas Coleridge, the president of ‘Condé Nast International,’ is Delevingne’s godfather, while Joan Collins, an English actress, screenwriter, and columnist, is her godmother.
She grew up in Belgravia, London, one of the world’s most affluent neighborhoods. She completed her GCSE examinations at the ‘Francis Holland School’ in central London.
She began attending ‘Bedales School’ in Hampshire when she was 16 years old, with the intention of studying acting and music, but she left after a year to follow her sister Poppy into the world of modeling.

At the age of ten, she made her modeling debut in a Bruce Weber editorial for ‘Vogue Italia.’
Sarah Doukas, the founder of ‘Storm Model Management,’ noticed her and signed her with the agency in 2009. She secured a salaried position after a year in the industry and went through two seasons of casting or visual interviews before her career took off.
Her runway debut was at London Fashion Week in February 2011, where she walked in the Burberry Prorsum autumn/winter collection. She opened and closed the ‘London Fashion Week’ in September 2011 by modeling for Burberry Prorsum’s 2012 spring/summer collection.
She was seen again, this time by Christopher Paul Bailey of ‘Burberry,’ and was cast in the British luxury fashion house’s spring/summer 2011 campaign.
She walked in various fashion events in 2012, including ‘New York Fashion Week,’ where she walked for Donna Karan, ‘Rag & Bone,’ Jason Wu, and Tory Burch, among others; ‘London Fashion Week,’ and the Burberry Prorsum Womenswear autumn/winter 2012 show.
She ramp walked for seven shows during the 2012 ‘Paris Fashion Week,’ including Stella McCartney, Nina Ricci, and ‘Chanel,’ establishing a professional relationship with Karl Lagerfeld, head designer and creative director of ‘Chanel.’
In such a short time, she rose to popularity as the ‘crush of the season,’ according to ‘Vogue.’ She walked for a variety of famous brands and fashion firms in the industry.
While still modeling, Delevingne made her big screen debut in 2012 with the historical romance picture ‘Anna Karenina.’ She portrayed Princess Sorokina in the film, which also starred Keira Knightley and Jude Law.
In 2013, she continued her modeling career by attending numerous events and catwalking for designers such as Jason Wu, ‘Rag & Bone,’ ‘Mulberry,’ and ‘Giles,’ among others. On November 13, she performed in the ‘Victoria’s Secret Fashion Show,’ which included performances by Taylor Swift and others. She opened and closed the Chanel Haute Couture Spring 2014 Show, as well as the Topshop ‘Unique S/S 15’ collection, in 2014. She also opened Fendi’s F/W 2014 collection for Karl Lagerfeld and closed Burberry’s show during the ‘London Fashion Week’ Autumn/Winter 2014 Collection Showcases.
In June 2014, she made her television debut in the final episode of a series of self-contained TV plays named ‘Playhouse Presents.’ She portrayed Chloe in the film and had the pleasure to work alongside experienced English actress Sylvia Syms.
‘The Face of an Angel,’ a British psychological thriller film, ‘The Feeling Nuts Comedy Night,’ a 90-minute comedy television event, and ‘Reincarnation,’ a short film by Karl Lagerfeld for ‘Chanel,’ are among her other acting credits from 2014.
On October 15, 2014, she designed a fashion collection for ‘DKNY,’ which was released. She’s also created many collections for Mulberry, the most recent of which was released on June 3, 2015.
In January 2015, she was named the new face of ‘Yves Saint Laurent Beauté’ and the new brand ambassador of ‘TAG Heuer.’ On March 10, 2015, she concluded the ‘Chanel’ Paris-Salzberg collection showcase, then on March 31, 2015, she closed the re-show in New York.
Meanwhile, she appeared in a number of advertisements for well-known brands, fashion houses, and designers, including Mulberry, Zara, Marc Jacobs, Chanel, Topshop, John Hardy, Disney London, and many others.
On June 8, 2015, her profile was removed from the ‘Storm Model Management’ website since she wants to focus on acting. Later that month, she claimed the onset of the skin ailment psoriasis as a major factor in her decision. Meanwhile, she was featured on the cover of American Vogue in July.
The American mystery comedy-drama ‘Paper Town,’ which was released in the United States on July 24, 2015, was the picture that gave her a major break. It was a commercial triumph, grossing $85.5 million throughout the world and earning her two ‘Teen Choice Awards.’
She also starred in the American superhero film ‘Suicide Squad,’ which was released on August 5, 2016 in the United States. Will Smith and Jared Leto’s film was a box office success, grossing $745.6 million worldwide. Delevingne received another ‘Teen Choice Award’ for her performance.

She is bisexual and was romantically linked to American musician Annie Clark, better known by her stage as St. Vincent. Delevingne revealed the connection in June 2015, and it lasted till September 2016. She was once linked to Harry Styles, an English singer.
In a June 2015 interview with ‘Vogue,’ she openly discussed her depression attack when she was 15 years old, saying, “I was hit with a tremendous wave of sadness, anxiety, and self-hatred, where the feelings were so intense that I would slam my head against a tree to attempt to knock myself out.”
After the male Southwest African lion Cecil was murdered in 2015, Delevingne auctioned her ‘TAG Heuer’ watch, generating £18,600 for ‘WildCRU.’

She can play the guitar and drums and is a great beatboxer.
Her name appears on the designer ‘camouflage’ bag ‘Mulberry Cara’.