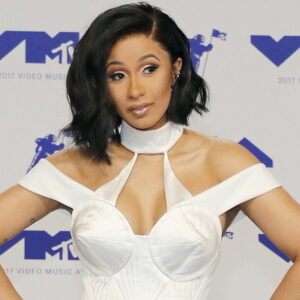 More Facts of Cardi B

Cardi B is the stage name of Belcalis Almánzar, an American rapper, singer, television personality, and actress who, with her debut studio album, Invasion of Privacy, became the first woman to win the Grammy Award for Best Rap Album as a solo artist. Cardi B used her burgeoning reputation on social media to establish herself as a musical celebrity in a short amount of time, following a long battle throughout her adolescent years and early adolescence. Her songs Bodak Yellow and I Like It debuted at the top of the Billboard Hot 100 chart, while her duets with Maroon 5 (“Girls Like You”) and Bruno Mars (“Finesse” and “Please Me”) landed in the top three. She is also signed to Atlantic Records and has two mixtapes, Gangsta Bitch Music, Vol. 1 and Vol. 2. Cardi B was a regular cast member on VH1’s Love & Hip Hop: New York and has now made her feature film debut with Hustlers. Cardi B’s iamcardib account has over 85 million followers, making her one of the most popular Instagram users.

Cardi B was born Belcalis Marlenis Almánzar in Washington Heights, Manhattan, on October 11, 1992, to a Dominican father and a Trinidadian mother. She spent a lot of time at her paternal grandmother’s house in Washington Heights while she was growing up in the South Bronx’s Highbridge neighborhood. She worked at a deli in Tribeca during her teenage years and joined the gang United Blood Nation when she was 16 years old. After being dismissed from the deli and evicted from her mother’s home, she turned to stripping to make enough money to leave an abusive relationship and pursue an education.

She went to Borough of Manhattan Community College after graduating from Renaissance High School for Musical Theater & Technology, a vocational high school on the Herbert H. Lehman High School campus. Rather than mentioning stripping, she told her mother that she made money by babysitting wealthy people’s children.

Career of Cardi B

Cardi B’s dance skills garnered her a solid Instagram following in the early 2010s, which grew as she started uploading amusing and uplifting videos about avoiding dodgy men and generating money. She stopped stripping in 2015 to focus on hosting jobs as a social media influencer as her Instagram and Vine fame expanded.

After she acquired a manager after reaching 500k Instagram followers, he saw her musical talent and urged her to attempt rapping, and she ended up on Jamaican singer Shaggy’s remix of his song Boom Boom. She made her television debut as a cast member of VH1’s reality series Love & Hip Hop: New York a few weeks later in November 2015, and became the breakthrough star of the show’s sixth season.

Cardi B released her first mixtape, Gangsta Bitch Music, Vol. 1, in March 2016 and the single ‘What a Girl Likes’ as part of KSR Group’s compilation Underestimated: The Album in September of the same year. In the same year, she was cast as Mercedes in the BET sitcom Being Mary Jane and appeared on an episode of Khloé Kardashian’s Kocktails with Khloé.

Cardi B started dating rapper Offset in early 2017, and the two got engaged on October 27 after he proposed during a Power 99 Powerhouse performance. In June 2018, TMZ revealed that the couple had secretly married in their bedroom in September 2017, which she acknowledged on social media. In April 2018, she announced her pregnancy on Saturday Night Live, and her daughter was born in July 2018. Cardi B and Kiari Kendrell Cephus split up in late 2018, only to reunite later that year. Cardi B filed for divorce in September 2020, but they were back together after a month.