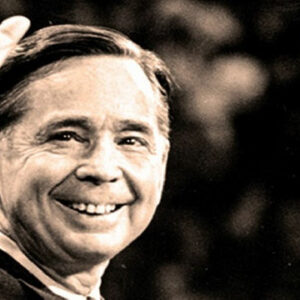 Carl Bert Albert was an American Democrat from a small coal-mining community in western Oklahoma. His main aim, despite his lowly beginnings, was to become a politician. He made it plain that from a young age, everything he did was geared to further his political ambitions. He was an exceptional debater and student body president in high school. He attended The University of Oklahoma and earned a degree in political science via hard effort. Using a Rhodes scholarship, he studied law at Oxford University in England and graduated in the early 1930s. After a few years of legal practice in Oklahoma City, he served in the United States Army during World War II. After serving in the military, he was elected to Congress. Six years later, Albert became Speaker of the House of Representatives. In American history, this was the highest political post held by an Oklahoman. He was active in Congress during a number of pivotal moments in U.S. history. His political career included the Vietnam War, the killing of President John F. Kennedy, the catastrophic riots at the 1968 Democratic National Convention, and the Watergate Scandal during President Richard Nixon’s administration.

Carl Albert was born in the Oklahoma town of McAlester on May 10, 1908. His father was a poor cotton grower and coal worker.

He graduated from McAlester High School in 1927. He won the national oratorical competition due to his debating ability. He also served as student body president. He enrolled at the University of Oklahoma in Norman in 1927.
In 1928, he won the National Oratorical Championship and a trip to Europe with all expenses covered. This enabled him to make enough money to cover the remainder of his undergraduate degree.

He began a private law office in Oklahoma City in 1935 and maintained it until World War II.
From 1941 until 1946, he served in the United States Army during World War II. He departed the service with the rank of lieutenant colonel.

In the 1946 election, Albert was elected as a Democrat to represent “Little Dixie,” the tiny third district in southeastern Oklahoma.
He was elected to the fourteen subsequent Congresses from 1947 and 1977.

He served as House Majority Whip from the Eighty-fourth to the Eighty-seventh Congresses, beginning in 1955.
1971 saw his election as Speaker of the House of Representatives. He held this role until his retirement in 1971.
He retired in 1977 and returned to McAlester, Oklahoma.

Carl Albert’s autobiography was released Little Giant: The Life and Times of the Speaker in 1990.

The Bronze Star was awarded to Albert for his service in the Army during World War II.

He was inducted into the Oklahoma Hall of Fame in 1957.

During his military service, on August 20, 1942, he married Mary Thomas in Columbia, South Carolina. Mary Frances and David were their subsequent offspring.

In 1979, the Carl Albert Center was created at The University of Oklahoma in Norman to study Congress as well as Albert’s life and political career via research.

Carl Albert passed away in McAlester, Oklahoma, on February 4, 2000, after years of poor health. He had 91 years of age.
The Public Health Service operates the Carl Albert Indian Health Facility in Ada, Oklahoma.
Carl Albert Park exists in Durant, Oklahoma.

In the Eunomia Chambers of the St. Peter’s College Law Library at the University of Oxford is a monument honoring him.

Carl Albert is one of the wealthiest and most well-known politicians. According to our research, Wikipedia, Forbes, and Business Insider, Carl Albert has an estimated net worth of $1.5 million.

Albert was well known as the ‘Little Giant from Little Dixie’ despite standing only 5 feet tall.
During his political career, he was runner-up for the presidency twice. Nixon offered Albert the vice presidency in 1973 when Spiro Agnew resigned for corruption, but Albert declined. He answered, “No. I traveled to Washington in order to become a member of Congress.”