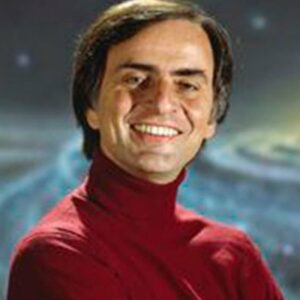 Carl Edward Sagan was an astronomer, cosmologist, astrophysicist, astrobiologist, and novelist who lived in the United States. He became interested in astronomy when he was five years old, when he discovered that the sun is actually a star and that all stars are the same size as the sun. He learned later, while studying at Chicago University, that astronomers are well compensated. He had been interested in astronomy as a pastime for a long time and was now relieved to learn that he might pursue it as a career. Following that, he got his PhD in astrophysics and, following a brief fellowship at the University of California, he began teaching, first at Harvard and later at Cornell. He was also named a visiting scientist at NASA at the same time. He was a well-known scientist who worked on planetary atmospheres, astrobiology, and the genesis of life, but his work on extraterrestrial life is what he is best known for. He also worked extensively to promote science, publishing several articles and books and appearing on numerous television shows. All of this helped him become the most well-known scientist in the 1970s and 1980s.

Carl Edward Sagan was born in Brooklyn, New York, on November 9, 1934. Samuel Sagan, his father, was a garment worker who immigrated from Kamianets-Podilskyi (now in Ukraine). Rachel Molly Gruber, his mother, was a New Yorker.
Carl was the eldest of two children born to his parents, and he had a sister named Carol. They were poor and lived in a little house in Bensonhurst. Their parents, on the other hand, took great care to instill in children an interest in a variety of subjects, particularly science.

His parents took him to the World Fair in New York in 1939, when he was only five years old. Even as a tiny child, he was so taken aback by several displays, particularly the ‘Futurama,’ that he was able to recollect them later in life.
Carl started his schooling in a nearby elementary school. He was astounded when he found that the sun was a star. He gradually developed an interest in planets and stars.

He eventually enrolled at David A. Boody Junior High School, where he discovered a passion for science. His favorite passion, though, remained astronomy. At 1948, the family relocated to Rahway, New Jersey, where Carl enrolled in and graduated from Rahway High School in 1951.

Following that, he enrolled at the University of Chicago for his undergraduate studies, earning a B.A. in 1954. He had always been fascinated by astronomy, but it was only recently that he realized it may be a viable career option. As a result, he continued his physics studies for another year.

During this time, he worked in H. J. Muller’s laboratory and collaborated with H. C. Urey, a physical chemist, on a thesis on the origins of life. He went on to receive his B.S. in 1955 and his M.S. in 1956.

Following that, he began his graduation work with Gerard Kuiper. Carl had the excellent opportunity to collaborate with Kuiper on the confidential military Project A119 in 1958, while still pursuing his graduation work. He received his Ph.D. in astrophysics in 1960. ‘Physical Studies of Planets’ was the title of his dissertation.

Carl Edward Sagan began his career at the University of California, Barkley, as a Miller Fellow in 1960. He assisted a group of astrophysicists in developing an infrared radiometer for NASA’s Mariner 2 robotic probe while there.
Sagan became an assistant professor at the Smithsonian Astrophysical Observatory, a Harvard University-affiliated institute, in 1962. He was also a visiting scientist at NASA’s Jet Propulsion Laboratory at the time.

In the latter role, he was a key contributor to the first Mariner missions to Venus, both in terms of design and management. Sagan also aided the expansion of biology’s position in NASA by collaborating with Joshua Lederberg.
During this time, he focused mostly on the physical characteristics of many planets, particularly Mars and Venus.

He discovered that the radio emissions from Venus were created by an extremely hot surface temperature trapped between the planet’s surface and its carbon dioxide cloud cover due to the sun’s heat.

His theory disproved previous claims that Venus’ atmosphere was similar to Earth’s. Despite the fact that many scientists were skeptical, NASA’s Mariner 2 and later Soviet scientists confirmed it.

Sagan had also looked through the data that was accessible on Mars. As a result, he deduced that the bright parts on Mars’ surface were lowlands filled with wind-blown sand, while the black areas were raised ridges or highlands.

During this time, he grew interested in life on other planets and demonstrated experimentally that amino acids could be made from basic molecules using radiation. He deduced from it that the presence of alien entities was not implausible.
After being denied tenure at Harvard, Sagan became an associate professor at Cornell University (Ithaca, New York) in 1968. He was promoted to full professor and director of the University’s Laboratory for Planetary Studies in 1970.

Sagan co-designed the first physical message targeted towards alien intelligence in 1971 with Frank Drake. Pioneer plaques were connected to Pioneer 10 and Pioneer 11 spacecrafts in the hopes that extraterrestrial life will discover them one day.

Sagan was appointed Associate Director of Cornell’s Center for Radiophysics and Space Research (CRSR) in 1972 and retained the position until 1981. During this time, he continued to work as a consultant for NASA, and in 1975, he assisted in the selection of landing sites for the Viking probes on Mars.

He was named the David Duncan Professor of Astronomy and Space Sciences in 1976, a position he held until his death. At the same time, he continued his work with NASA, co-designing the Voyager Golden Record.
Following that, Sagan worked on NASA’s next project, Galileo, which was originally named Jupiter Orbiter Probe. He continued his studies on planetary atmospheres, astrobiology, and the genesis of life at the same time.

Sagan was also a prolific writer who had successfully popularized astronomy through his writing. He had over 600 papers published and twenty books authored, co-authored, or edited. The 1973 book ‘Jerome Agel, The Cosmic Connection: An Extraterrestrial Perspective’ was the first to establish him as a popular science writer.

Another of his well-known publications was ‘The Dragons of Eden: Speculations on the Evolution of Human Intelligence,’ published in 1977. He used anthropology, evolutionary biology, psychology, and computer science to demonstrate how human intellect could have evolved.

His best-known piece, however, was ‘Cosmos,’ which was published in 1980. The book was adapted into a thirteen-part television series called ‘Cosmos: A Personal Voyage’ in the same year.

The series was hosted by Sagan himself, and it was the most watched series in the history of American public television for a decade. Apart from that, it was seen by nearly 500 million people in 60 countries.

Bestsellers such as ‘Contact’ (1985), ‘Pale Blue Dot: A Vision of the Human Future in Space’ (1994), and others followed ‘Cosmos.’ ‘The Demon-Haunted World: Science as a Candle in the Dark,’ was his most recent important work (1995). He attempted to teach the scientific method to laypeople and to promote skeptical thinking in it.

Carl Sagan is most known for his work on extraterrestrial life study. He demonstrated that amino acids and nucleic acids, the two most important components of life, can be made by exposing a mixture of molecules to ultraviolet light, implying that life can exist outside of the earth.

Carl Sagan and Frank Drake collaborated on the Pioneer plaques, which featured images of naked men and women as well as various other symbols. It had the potential to be comprehended by any extraterrestrial intelligence that could come across them in the future.

The Voyager Golden Records are a time capsule designed to communicate the story of the Earth and its inhabitants to extraterrestrials. They included 116 photos and a range of natural sounds, as well as musical selections from various eras and cultures, Mores Code messages, and so on. Carl Sagan convened a committee that chose the contents.

Carl Sagan received numerous accolades during the course of his career. The National Academy of Sciences’ Public Welfare Medal (1994) and NASA’s Distinguished Public Service Medal (1977& 1981) were the most notable.
His novel ‘The Dragon of Eden’ earned the Pulitzer Prize in 1978.

Carl Sagan was married three times throughout his life. He married Lynn Margulis, a biologist, in 1957. She was a science author, evolutionary theorist, and educator. Jeremy and Dorian Sagan were the couple’s two children. In 1965, the marriage ended in divorce.

On April 6, 1968, he married Linda Salzman, an artist and writer. She designed the Pioneer plaque’s artwork, co-produced the Voyager Golden Record, and co-wrote ‘Murmurs of the Earth.’ Nick Sagan was the name of the couple’s kid. In 1981, their marriage also terminated in divorce.

He married Ann Druyan in 1981, an award-winning writer and producer who specializes in science communication. Alexandra and Samuel Sagan were their children. His marriage lasted until 1996, when he died.

Sagan acquired myelodysplasia two years before his death. He had to have three bone marrow transplants after that. He then acquired pneumonia and died of it on December 20, 1996, early in the morning. He was 62 years old at the time.

Carl Sagan’s net worth or net income is believed to be in the range of $1 million to $5 million. His major profession as an astronomer has brought him a great deal of riches.