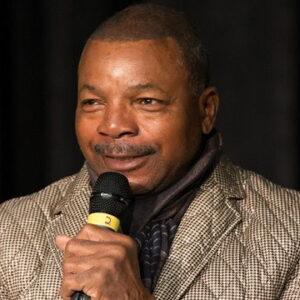 Carl Weathers is an American actor who is most known for his roles in the ‘Rocky’ movie franchise. He is also a former professional football player who has appeared in games for the NFL (National Football League) and the CFL (Canadian Football League) (Canadian Football League). He began his acting career in New Orleans, Louisiana, with appearances in films such as ‘Friday Foster’ and ‘Bucktown.’ He then went on to portray the most important role of his career in the American sports drama film ‘Rocky.’ For his portrayal of Apollo Creed, a rugged, unchallenged boxing champion, he gained enormous popularity and acclaim. The film was a commercial success and earned three Academy Awards. Weathers returned to the role of Apollo Creed in ‘Rocky II’ after acting in a few previous films. This picture was also a commercial success, though not as good as its predecessor. In the next two films in the series, Weathers reprised his role as Creed. Weathers has also had key roles in a number of other films. In the sci-fi horror film ‘Predator,’ he had a pivotal role. He most recently appeared in the science fiction action film ‘American Warships.’ He is also well-known for his television work, having starred in the American judicial drama series ‘Chicago Justice.’

Childhood and Adolescence of Carl Weathers

Carl Weathers was born in New Orleans, Louisiana, on January 14, 1948. His father made a living as a day worker.
From a young age, he was involved in sports. He received an athletic scholarship to St. Augustine High School.

He participated in a variety of sports throughout high school, including football, judo, and wrestling. He received his diploma in 1966. Later, he graduated from San Francisco State University with a BA in Drama.

Career in Football of Carl Weathers

Carl Weathers began his professional football career while still in college. He started his football career at Long Beach City College as a defensive end. He eventually went to San Diego State University, where he quickly earned a letterman for the Aztecs.

He signed as a free agent with the Oakland Raiders in 1970 after being undrafted. That year, he appeared in seven games for the squad, and the following year, he only appeared in one game.

Weathers signed with the BC Lions of the Canadian Football League after being released from the team. He appeared in eighteen games for the team. In 1974, he announced his retirement from football.

After starring in the American sports drama picture ‘Rocky,’ Weathers rose to fame in 1976. Rocky Balboa, a small-time club boxer who obtains a crack at the world heavyweight championship, is the subject of a film directed by John G. Avildsen. Weathers portrayed Apollo Creed, an undisputed boxing champion who must defend his world title against Balboa. The film was a commercial success and earned three Academy Awards.

He repeated his role as Apollo Creed in ‘Rocky II’ in 1979, after appearing in a few other films such as ‘Semi-Tough’ (1977) and ‘The Bermuda Depths’ (1978). The picture was a commercial triumph, becoming one of the year’s highest-grossing films.

In ‘Rocky III’ (1982) and ‘Rocky IV,’ he reprised his role as Apollo Creed (1985). Both films were commercially successful and enjoyed worldwide acclaim. Following that, he played Colonel Al Dillon in the sci-fi horror action picture ‘Predator.’ The movie was a financial success.

He has also appeared in a number of TV shows over his career. He starred in the action crime drama series ‘Street Justice,’ which ran from 1991 to 1993. His most recent television appearance was in the American judicial drama ‘Chicago Justice,’ in which he played a major role. From March through May 2017, the show aired.

Carl Weathers’ performance in the Oscar-winning sports drama picture ‘Rocky’ is widely regarded as his most important effort. The film is directed by John G. Avildsen and tells the narrative of Sylvester Stallone’s Rocky Balboa. Rocky, a small-time club fighter, gets a shot at the world heavyweight championship and fights Apollo Creed, played by Weathers, in the film. The film was a major commercial success, generating $225 million on a $1 million budget.

In the sequel to ‘Rocky,’ he reprised his role as Apollo Creed in the sports drama film ‘Rocky II.’ Rocky Balboa finally becomes the World Champion after defeating Creed in a rematch in this film directed by Sylvester Stallone. The picture was a commercial triumph, becoming one of the year’s highest-grossing films.

In the American sports comedy film ‘Happy Gilmore,’ he played a pivotal role. The story concerns an unsuccessful ice hockey player who discovers his unexpected skill in golf, directed by Dennis Dugan. The movie was a financial success, generating more than $40 million on a $12 million budget. It was nominated for a number of accolades, including the ‘MTV Movie Award,’ which it won.

In the crime drama TV series ‘Street Justice,’ Carl Weathers portrayed the starring character. The plot followed the exploits of a police detective and a martial arts master. The show first aired on syndication in September 1991. It was, however, cancelled after only two seasons in May 1993.

Carl Weathers won the ‘Behind the Voice Actor Award’ for ‘Best Male Vocal Performance’ in 2014 for his voice part in the TV special ‘Toy Story of Terror.’

Carl Weathers has had three marriages. In 1973, he married Mary Ann Castle for the first time. After ten years of marriage, they divorced with two children.
In 1984, he married Rhona Usneel. However, his marriage ended in divorce as well.
He married Jennifer Peterson in 2007. After two years, they divorced.

Carl Weathers has an estimated net worth of $8 million as an actor, director, producer, and retired football player in the United States.