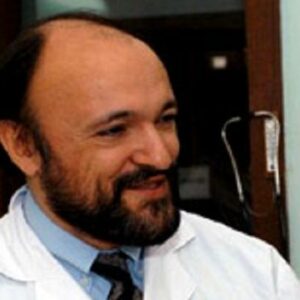 Carlo Urbani, an Italian epidemiologist, was the first person to notice that SARS was a very contagious disease. He worked as an expert on infectious diseases in the office of the World Health Organization in Hanoi, the capital of Vietnam. He warned the WHO about this deadly disease. Because he warned people early, millions of lives were saved around the world. But unfortunately, Dr. Urbani caught the SARS virus while taking care of people who had it. He later died because of complications from the disease. As a young man, he joined the Italian Catholic NGO Mani Tese as a medical doctor with a specialty in infectious and tropical diseases from the University of Messina. He has been a doctor ever since. After he had worked in the field of epidemic medicine for a while, he became an outside consultant for the WHO and joined Doctors Without Borders. He went all over the world and spent a lot of time in Vietnam and Cambodia treating people with infectious diseases. He was also very important in figuring out how the hookworm spread. He was the first person to write down how Schistosoma mansoni was spread. Carlo Urbani was an epidemiologist, but he was also a passionate photographer, an expert pilot of ultra-light planes, and a good organist.

Carlo Urbani was born in Castelplanio, Italy, on October 19, 1956, into a middle-class Catholic family. His mother was the headmistress of a primary school and his father taught at the Ancona Commercial Navy Institute.

Urbani kept working at the university after he was done with school.
He wanted to do something about the problems in international health. At the end of the 1980s, he went to Mauritania with a group of volunteers to help the country’s Ministry of Health control parasitic diseases.

In 1990, he went to work at the hospital in Macerata. Urbani got in touch with WHO while he was in Macerata. In 1993, he started doing short-term jobs for WHO in the Maldives, Mauritania, and Guinea.
In 1995, he went to the Maldives to study the spread of hookworm, which is a dangerous infection of the intestines, and to teach lab workers how to test for worms.

Urbani was the first person to write down how Schistosoma mansoni was spread. This infection hurt more than 200 million people all over the world.
When Doctors Without Borders (MSF) needed an expert on infectious diseases, they contacted WHO and were put in touch with Urbani. In 1997, he moved with them to Switzerland and worked in Cambodia.

In Cambodia, he worked to stop the spread of Schistosoma mekongi, a parasitic flatworm that causes diseases such as intestinal schistosomiasis. This illness hurts the liver and leads to fibrosis, which eventually kills the person who has it.

Urbani did what she could to lessen its effect. With the implementation of his treatment plan, the cost of diagnosis went down.
Urbani was the President of MSF’s Italian branch in 1999. In the same year, MSF asked him to go to Oslo to accept the Nobel Peace Prize on their behalf.

He worked with the Ivo de Carneri Foundation to stop parasitic diseases in developing countries by taking effective steps. He also joined the organization’s scientific committee.
In 2000, WHO sent Urbani to Hanoi as an expert on diseases that can be spread between people in Laos, Cambodia, and Vietnam.

He suggested good ways to stop trematodes and cestodes from getting into food. The trematodes worm hurt about seven million people in Asia.
He agreed with the idea that children who had been given praziquantel should be treated regularly to prevent cholangiocarcinoma of the liver. This kind of cancer is very bad.

He showed that he had many skills through his love of photography, his skill as a pilot of ultralight planes, and his skill as an organist.

Carlo Urbani was the first WHO employee to notice the spread of the deadly SARS disease. He did this while trying to figure out what was wrong with a patient that other doctors had not been able to figure out. He knew right away that he was dealing with a disease that spread quickly and helped the WHO respond quickly to the major epidemic.

Urbani was one of the people who accepted the 1999 Nobel Peace Prize on behalf of Médecins Sans Frontières. He was in charge of the Italian branch of the organization.

Urbani and Giuliani Chiorrini said “I do” and got married. There were three kids in the family.
In February 2003, the French Hospital of Hanoi asked Urbani to treat an American patient. The doctors thought that the person had pneumonia. After looking at the patient, Urbani thought that he or she had a highly contagious disease.

He told WHO about it and also asked the Health Ministry of Vietnam to do what needed to be done. The hospital staff was told to use high-filter masks, double gowns, and, most importantly, to put patients in separate rooms.
As a preventive measure, plans were made to check on travelers. The WHO’s warning to the whole world about this disease was heard everywhere.

In Hanoi, where he was helping people with SARS, he got infected with the virus himself.
He got sick on the way to Bangkok. After 18 days in intensive care, he died on March 29, 2003, in Bangkok. He was 46 years old.

Carlo Urbani is one of the wealthiest doctors and is on the list of the most well-known doctors. Based on what we’ve learned from Wikipedia, Forbes, and Business Insider, Carlo Urbani’s net worth is about $1.5 million.