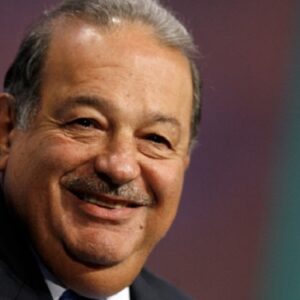 Carlos Slim is a well-known philanthropist and billionaire investor from Mexico. He now owns over 200 enterprises in a range of industries and has been ranked the richest man in the world by Forbes magazine for numerous years in a row. From a young age, he acquired basic business practices from his father and worked in his family’s firm as a teenager. He began investing seriously after graduating from college and gradually built a multi-industry empire of conglomerates and firms, which he both established and purchased. He now owns stakes in a variety of Latin American and worldwide businesses, ranging from construction and manufacturing to dry goods and tobacco. His most well-known and powerful holdings include a near-complete monopoly on the Mexican mobile phone market, which offered over 80% of the country’s mobile services at one point. Part of his huge fortune goes to philanthropic programs committed to environmental preservation, dependable and inexpensive health care, the preservation of culture and the arts, and a variety of other humanitarian causes. He is the honorary chairman of his parent business, ‘Grupo Carso,’ for life, although many of the company’s daily tasks have been passed off to his children after he underwent heart surgery.

Carlos Slim Hel was born in Mexico City, Mexico, on January 28, 1940, to Lebanese parents. His father was a prominent dry goods business owner, and he was one of six children.
Slim and his siblings were taught business by their father from an early age, and by the age of 12, Slim had purchased stock in a Mexican bank. Slim worked in his father’s business until he was 17 years old, despite his father’s death in 1953.

He studied civil engineering at the National Autonomous University of Mexico. While in school, he also taught algebra and linear programming, and after graduation, he moved into business.

Slim began his own career as a trader in Mexico, building on his father’s excellent financial base, and went on to form his own brokerage that invested in individual firms. By 1965, his capital had expanded to the point that he was forming new companies or purchasing them completely.

By 1966, he was projected to be worth $40 million and rising. Although he invested in a variety of enterprises in his early career, his primary concentration was construction, mining, and real estate, and he continued to buy businesses in those fields.

During the 1970s, he proceeded to expand his empire by forming and buying businesses in a variety of industries. By 1980, he had consolidated all of his businesses into the parent company ‘Grupo Galas,’ which included all of his holdings.

The primarily oil-based economy of Mexico suffered and collapsed in 1982, as banks were nationalized and the value of the Mexican currency Peso plunged due to declining oil prices. Slim expanded his purchase attempts throughout the next few years of the economic collapse, gaining huge stakes in Mexican subsidiaries of major corporations, including a 50 percent stake in ‘The Hershey Company.’

His conglomerate, ‘Grupo Carso,’ became a publicly traded firm in 1990. This is also the year he began to expand his clout in the telephone industry, partnering with ‘France Télécom’ and the ‘Southwestern Bell Corporation’ to buy the Mexican government’s phone firm, ‘Telmex.’ This was the beginning of an almost total takeover of the country’s landline and, subsequently, mobile phone services.

Slim’s interests began to expand beyond Latin America after decades of owning the Mexican divisions of several foreign corporations. He established a US branch of his phone company, ‘Telmex,’ and bought a stake in a US-based mobile company, ‘Tracfone.’ He also had heart surgery and began to step back from the day-to-day operations of his company, handing over the reins to his children and family members.

He proceeded to expand his empire in the United States and Latin America during the 2000s, purchasing and selling firms and growing his stakes in his long-standing mobile phone and tobacco businesses. During this time, he invested in a variety of firms, including ‘The New York Times Company,’ ‘Saks Fifth Avenue,’ and the airline ‘Volaris.’
Slim took charge of his first successful European acquisition, Telekom Austria, on April 23, 2014. Slim sees this as an ideal opportunity to expand into the Central and Eastern European markets, as the company has already established mobile services in seven European nations.

He became the largest individual stakeholder in ‘The New York Times Company’ on January 15, 2015, with a 16.8 percent stake. Slim bought these shares using money from loans issued to the company while it was in trouble at the start of the US recession.

Slim, an inquisitive businessman, has collected a diverse range of businesses under his ‘Grupo Carso’ umbrella. However, his purchase of the communications business ‘Telmex,’ which was formerly administered by the Mexican government, gave him a monopoly over the land phone and mobile services industry, as the company served nearly 80% of the Mexican population.

Awards and Achievements This billionaire has been named the richest man in the world four times by the publication ‘Forbes.’ His enormous wealth is nearly completely self-made.

In 1967, Slim married Soumaya Domit, with whom he had six children. In 1999, his wife passed away.
In 1999, Slim had heart surgery. Following his heart operation, he began to relax and delegated the day-to-day management of his numerous holdings to his children.

Slim is known for donating large sums of money to philanthropic projects in a variety of fields, including education, health, and the arts. The ‘Fundación Carlos Slim Hel’ was founded in 1989, and his generous gifts to museums, healthcare initiatives, wildlife conservation activities, and a variety of other projects earned him a spot on Forbes’ list of the world’s top givers.

Carlos Slim Helu has a net worth of $83.1 billion.

Slim, who has been compared to billionaire Warren Buffett, became the world’s richest man in March of 2007.