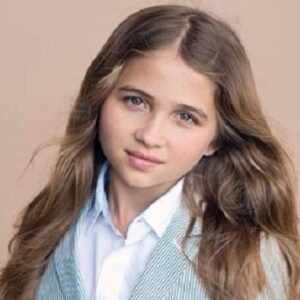 Carmen Blanchard is a talented young American actress who is best known as the younger sister of Rowan Blanchard, the popular star of the sitcom “Girl Meets World.” Carmen and her older sister Rowan began their careers in the performing arts at a young age, singing, dancing, and acting in a variety of shows. She then followed in her sister’s footsteps into acting, first in the TV series ‘Encounters’ and then in the first season of the American anthology horror TV series ‘American Horror Story.’ She received a lot of positive feedback from the audience for her portrayal of little Violet in the latter series, and she was also noticed by American actor and director Jeremy Piven, who cast her as Piven’s niece in the short comedy film ‘Jeremy Piven’s Beard.’ She is also recognized for her role in the film ‘A World Away,’ directed by her father, Mark Blanchard, in which she appeared alongside Rowan and her younger brother, Shane, among others. When Rowan accompanied her to the White House to commemorate International Day of the Girl with ‘Glamour’ magazine, she added another feather to her cap. Carmen’s progress in the world of glamour and entertainment has been quite remarkable, and only time will tell if she will continue in this sector as she grows older.

Carmen showed an early interest in the performing arts and went to many events with her older sister, Rowan, where they both sang, danced, and performed acts.

She then began acting like her older sister Rowan, whom she resembles almost identically but for her somewhat lighter hair. She got her start in television shows such as ‘Encounters’ and ‘American Horror Story.’

She appeared in the first season of the latter, titled ‘American Horror Story: Murder House,’ which aired on FX from October 5, 2011, to December 21, 2011.

The season, which was produced by ’20th Century Fox,’ focused on the Harmon family, with Carmen as Violet, the daughter of Dr. Ben Harmon and Vivien.

Not only did the season receive positive reviews from critics, but Carmen also received some basic recognition. Jeremy Piven, an American actor, and producer, was impressed by her performance during the season and put her in his short comedy film ‘Jeremy Piven’s Beard,’ written by Alex Richanbach and directed by Ian Pfaff.

She played Jeremy Piven’s niece in the film, which was released on March 28, 2013, in the United States. Carmen, who is nine years old, received additional praise and appreciation as a result of the film.

Her father, Mark Blanchard, directed the 2017 American adventure film ‘A World Away,’ in which she starred. In addition to Nadine Velazquez, Mary Lynn Rajskub, and David DeLuise, she had the opportunity to share screen time with her older sister, Rowan, and younger brother, Shane. Carmen was also seen in the video ‘Who I Am.’

Carmen accompanied her older sister Rowan to the White House for the ‘International Day of the Girl’ ceremonies on October 11, 2016.

At a special panel held by ‘Glamour’ magazine, Rowan and actress-model Yara Shahidi, among others, had substantial debates on girl power with Michelle Obama, the then-First Lady of the United States.

Carmen Blanchard was born to Elisabeth and Mark Blanchard on September 8, 2003, in California, United States, as their youngest daughter and second of three children. Her mother and father are also yoga instructors.

Rowan, her older sister, and Shane, her younger brother, are her siblings. She is currently enrolled in high school while continuing her performing career.

Carmen is one of the wealthiest TV actresses and one of the most popular. $3 million in net value.