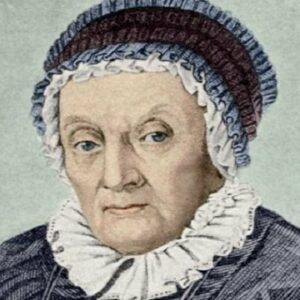 Caroline Herschel was a German astronomer who made substantial contributions to the discipline. Her most important contributions to astronomy are the detection of multiple comets, as well as the discovery of Uranus, the planet. She overcame her obstacles and earned a place in history in an era when the world was much more patriarchal. Herschel contracted typhus when he was a child. Her telescopes were always a favorite of hers. Herschel spent her free time stargazing and peering into the sky with her Newtonian telescope. Herschel’s parents had placed limitations on her since she was a child, but she appeared destined to aim for the stars. With the support of her brother, she moved to England and never looked back. After pursuing music for a period, she was persuaded by her brother to switch her focus to astronomy. Her commitment to the cause caught the attention of the British Royals, who awarded her a stipend. She not only discovered a number of astronomical objects over her career, but she also published some of her findings. The ‘Royal Astronomical Society’ released ‘The Catalogue of Stars,’ which is an example of such a publication. She has been credited as being the first woman to discover comets.

Caroline Herschel was born to Anna Ilse Moritzen and Isaac Herschel on March 16, 1750. She was one of the couple’s 10 children, the eighth in particular. Anne was ignorant, whereas Isaac was a musician of Jewish heritage.
Caroline had a very informal education, in the sense that she learnt to read and write but did not have a traditional education. She was only ten years old when she was diagnosed with the deadly Typhus disease, which presented her with numerous problems at such a young age. Caroline’s physical growth was stunted by the illness, and she stood at slightly over four feet tall. The sickness had an effect on the girl’s vision as well.

Her mother was reportedly skeptical of Herschel’s education and believed that Herschel should focus on home responsibilities. In the absence of her mother, her father, a sensible thinker, taught violin lessons to his adored daughter.

Caroline’s parents made her focus more on domestic tasks. They made it impossible for her to be self-sufficient, even preventing her from learning French, which would open up a plethora of work prospects.
Fortunately, Caroline Herschel’s two brothers persuaded their mother to allow her to travel to England. One of her brothers, William, in particular, wished for his sister to join him in his musical endeavors.
Caroline traveled to Bath, England in 1772, and her time there profoundly influenced her outlook on life. She practiced singing and learnt to play a variety of instruments, including the Harpischord.
She also played on many stages, but, surprise, she turned to Astronomy at the urging of her brother William. Caroline was supposedly needed to help him manage his Astronomy catalogues and paperwork.

William eventually gave up music and committed himself entirely to the development of telescopes. Caroline Herschel assisted him in this endeavor.
Caroline Herschel made an early astronomical accomplishment when she and her brother William discovered the planet Uranus in 1781.

This achievement helped the twins gain a lot of notoriety, particularly among British nationals. William was knighted for his achievements, and the British royals awarded his sister the position as William’s personal assistant. Herschel was also given a stipend of 50 pounds per year.

Caroline made history in 1783 when she found the Andromeda and Cetus Nebulae. She went on to uncover 14 additional nebulae, a finding that caught astronomical circles off guard.
Her brother William congratulated her on her achievement and presented her with a device known as the Newtonian Sweeper, which aided her in her astronomical endeavors even more.
Herschel is often credited as being one of the first to detect comets, a fascinating celestial occurrence. Caroline went on to detect seven more comets between 1786 and 1797. The most famous of these was ‘Comet Encke,’ which is thought to orbit the sun once every 3.3 years.

Caroline Herschel is famous for discovering 2500 nebulae in addition to comets, which is one of the reasons for her enormous fame. ‘British Catalogue,’ a compilation of English astronomer John Flamsteed’s observations, was also amended by the famed astronomer.

Caroline was honored by the ‘Royal Astronomical Society’ with a gold medal in 1828.
In 1846, she received yet another gold medal, this time from King Frederick William III of Prussia.

In 1788, her brother William married a woman named Mary Pitt, which concerned Herschel to some extent. The astronomer was unsure whether her sister-in-law would accept her, but Mary and Caroline got along swimmingly, and the three of them resided in the same house.
Caroline moved to her motherland, Germany, after William died in 1822. She went to great lengths to assist William’s son, John Herschel, in his astronomical research.

Caroline is said to have given her nephew an inventory of her nebula discoveries and taught him everything she knew about astronomy. John Herschel finally rose to the ranks of history’s greatest mathematicians and astronomers.
Caroline lived her entire life unmarried and was a spinster at the time of her death. At the age of 97, she died on January 9, 1848. She was laid to rest next to her parents’ graves in Hanover, Germany.
In her honor, an asteroid named ‘Asteroid 281 Lucretia’ and a crater on the moon named ‘C.Herschel’ have been named after her.

Adrienne Rich, a well-known American poet, paid respect to Herschel in her poem ‘Planetarium,’ which she wrote in 1968.

Caroline Herschel was mentioned in the feminist artwork ‘The Dinner Party,’ which was created to honor the accomplishments of notable women throughout history.

Caroline is one of the wealthiest Astronomers and one of the most well-known Astronomers. Caroline Herschel’s net worth is estimated to be $1.5 million, according to Wikipedia, Forbes, and Business Insider.