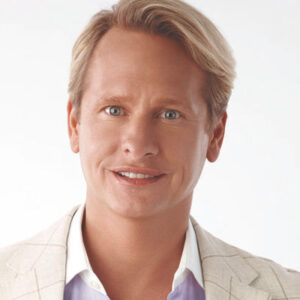 A well-known TV personality, actor, producer, designer, stylist, and the author is Carson Kressley. He is recognized as a television mogul and is well-known for his charisma. Carson has played a variety of parts during his storied career, and he has excelled in each of them. As a self-described gay man, Carson is an example to the entire LGBT community since he made his sexuality one of his assets. He has degrees in both finance and fine arts, making him a smart man. He excels at riding horses, too. Carson’s involvement in numerous horse-related performances and competitions is greatly influenced by his love of animals. His parents gave him his first horse, which he named Sparky when he was only five years old. He claimed that his regular participation in horse competitions indirectly assisted him in becoming well-known. According to him, his passion for horses exposed him to a variety of people, which helped him develop his interpersonal skills.

On November 11, 1969, Carson was born in Allentown, Pennsylvania. His parents, Barbara and Willard Kressley, raised both him and his sister Diana. Carson was introduced to horses at a very young age because his family was in the pony-raising industry. From a young age, he entered competitions in a variety of equestrian disciplines.

He received his diploma from the renowned “Northwestern Lehigh High School” in 1987. He earned a bachelor’s degree from “Gettysburg College” in 1991. He joined the largest collegiate fraternity in the US, Alpha Phi Omega, while a student and was elected to the “Phi Beta Kappa Society.” He joined the “U.S. World Cup Saddle Seat Equitation Team” in 1999, and in 2009, he took home the world title.

As a freelance stylist, Carson Kressley started out his profession. He started working for the Ralph Lauren Corporation in 1994, where he held positions in corporate advertising and menswear. Up until 2002, he kept working for Ralph Lauren.

He made his television debut in 2003 when he began serving as a fashion consultant for the Bravo Cable Television Network program “Queer Eye.” Carson keeps making appearances as a commentator and fashion critic on various TV programs. He frequently appears on popular TV programs including “Good Morning America” and “How to Look Good Naked” (US version).

Additionally, he has analyzed different red-carpet outfits at occasions like the “Golden Globes,” “The Academy Awards,” etc. He served as a judge for the Miss Universe pageant in 2005, which was broadcast live from Bangkok. He served as a commentator for the prestigious Miss Universe and Miss USA beauty pageants in 2006.

He made an appearance as a judge on the reality television program “Crowned: The Mother of All Pageants” in May 2007. Mother-daughter teams compete in a beauty pageant on the program. On December 12, 2007, “The CW Television Network” broadcast the program for the first time.

He was the host of the makeover program “How to Look Good Naked” in January 2008. The first edition of the show had a record number of viewers and received the highest rating on the “Lifetime” network. He participated in Cyndi Lauper’s “True Colors Tour 2008” later on in the year as the MC. After that, he was seen serving as co-host for the ABC television program “True Beauty” with Beth Stern and Vanessa Minnillo.

He launched “Carson Nation” in 2011 on “The Oprah Winfrey Network.” He took part in “Dancing with the Stars” in September 2011, and he was matched with a dancer named Anna Trebunskaya. However, he was eliminated in the fifth week of the competition.

The seventh season of the well-known television reality series “RuPaul’s Drag Race” will have Carson and Ross Mathews as its regular judges, it was confirmed in 2015.

When the “Eurovision Song Contest” was broadcast live in America for the first time in 2016, Carson was given the chance to serve as a commentator on the program. He and his family members made an appearance on the program “Celebrity Family Feud” in August 2016.

He participated in TV competitions like “The New Celebrity Apprentice,” “Worst Cooks in America,” “The Chase,” and “I’m a Celebrity… Get Me Out of Here (Australian version)” in 2017.

In the film “The Perfect Man,” where he portrayed the part of Lance, a bartender, he made his acting debut. The Year Without a Santa Claus, his subsequent movie, debuted on NBC on December 11, 2006. An independent comedy, “16 to Life,” in which he had a cameo, was his third film. It’s Christmas, Carol, his fourth film, had its world premiere in December 2012.

He launched his own men’s and women’s clothing line called “Perfect” in November 2006. He claims that his time spent working with Ralph Lauren inspired him to launch his own clothing company.

He unveiled a brand-new clothing line in April 2012 under the moniker “Love, Carson.” The line was created specifically for women because it wanted to make inexpensive, transforming dresses for ladies.

He was ordained in April 2006 in accordance with the ‘Universal Life Church’s’ rules, which gave him the authority to officiate at a wedding on the ‘Queer Eye’ program. He is a prominent horse show exhibitor and the owner of American Saddlebred horses. The “Melbourne Cup,” the most renowned Thoroughbred horse race in Australia, is represented by Carson. Every year, “The Melbourne Cup” is held.

He placed second in the celebrity edition of the popular American television game show “Jeopardy” in November 2006. Regis Philbin and Nancy Grace were two of the famous people he faced off against.

Following the inspiration from his own life experiences, Carson Kressley has published a number of books. His book “Off The Cuff” was released in 2004. He wrote the children’s book “You’re Different and That’s Super” in 2005, drawing inspiration from the Hans Christian Andersen tale “The Ugly Duckling.” Jared Lee, a well-known cartoonist, created the illustrations for “You’re Different and That’s Super.” Also a co-author of “Queer Eye for the Straight Guy,” Carson Kressley.

Carson Kressley maintains a modest and humble demeanor despite being incredibly brilliant, attractive, popular, and successful with an amazing net worth.
He outed himself as gay and has thousands of followers on Twitter, where he is quite active.

He mentioned his parents and said they were the last people to find out about his sexuality in one of his most recent conversations with journalist Steve Price. A few days prior to the television premiere of “Queer Eye for the Straight Guy,” he had not told them the truth.

With an $8 million net worth, Carson Kressley is an American television personality, fashion designer, actor, producer, and book. For the Bravo reality series “Queer Eye for the Straight Guy” (2003–2007), which later went by the name “Queer Eye” alone, Kressley is best known as the “Fashion Savant.” In addition to serving as a judge on “RuPaul’s Drag Race” (2015–present), “RuPaul’s Drag Race All Stars” (2016–present), and “RuPaul’s Secret Celebrity Drag Race,” Carson co-hosted the ABC reality series “True Beauty” in 2010. (2020–present). He produces “RuPaul’s Drag Race All Stars,” “16 to Life,” “How to Look Good Naked,” “Get a Room with Carson & Thom,” and produced and presented “How to Look Good Naked” in 2008. (2018).