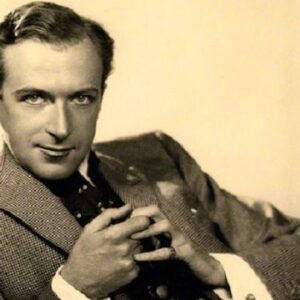 Sir Cecil Walter Hardy Beaton was an English photographer best known for his avant-garde pictures of celebrities. His work was known for going to great efforts to capture a specific look—subjects were forced to lie down, climb trees, stand on a ladder, or simply assume a poker face in order for him to create new images. His interest in photography began when he was a little boy, when he would look at photos of society women and celebrities in publications. When he was 11 years old, he obtained his first camera, and thus began his long love affair with images and photography. His two younger sisters served as his first models, and they delighted in amusing their brother by posing for him in outrageous outfits. He was uninterested in studies and, despite attending college for a short time, dropped out before graduating. He began his career as a fashion photographer for the British edition of ‘Vogue,’ where he became known for his society portraits and fashion shots. During WWII, he rose to become the country’s top war photographer, capturing the horrors of battle in vivid detail in his images. He also earned an Academy Award for his efforts as a stage and costume designer.

Ernest Walter Hardy Beaton and Etty Sissons had a son named Ernest Walter Hardy Beaton. His father was a well-known lumber merchant with a thriving business. Cecil was the eldest of three children, with one brother and two sisters. He went to St. Cyprian’s School and Heath Mount School. He had a lot of artistic talent and was a terrific painter and singer.

He obtained a camera for his eleventh birthday and has been fascinated with photography ever since. He used to photograph his younger sisters dressed up in extravagant costumes. He went to Cambridge’s St. John’s College to study history, art, and architecture. He continued to dabble in photography as a pastime. In 1925, he dropped out of college after realizing he had no interest in academia.

He went to work for his father’s lumber company, but found the labor to be tedious. As an office worker for a cement plant, he had a similarly unsuccessful experience. He realized that photography was his true calling and held his first exhibition in London’s Cooling gallery under the patronage of Osbert Sitwell. The exhibition was a success, and the fresh talent was introduced to the world of photography.

In 1928, he moved to New York. He made friends with the editors of ‘Vogue’ and ‘Vanity Fair’ there. He would work for both magazines for the following few decades, specializing in fashion photography and society pictures. ‘The Book of Beauty,’ a compilation of his portraits, was published in 1930. He leased Ashcombe for 15 years, an 18th century mansion where society people gathered on weekends to present amateur plays.

He was frequently commissioned to photograph the Royal Family for official use. He photographed the Queen Mother, Queen Elizabeth, on various occasions and also acted as the wedding photographer for the Duke and Duchess of Windsor.

During WWII, he worked for the Ministry of Information, where he was tasked with photographing the front lines. Through his lenses, he captured the atrocities of the conflict and broadcasted them to the rest of the globe. A photograph of a young girl embracing a teddy bear while she lay wounded in a hospital was one of his most moving.
He tried his hand at stage and costume design after the war. For revivals of the plays ‘Lady Windermere’s Fan’ (1946), ‘The Grass Harp’ (1952), ‘The Chalk Garden’ (1955), ‘Saratoga’ (1959), and ‘Coco,’ he designed the stage, settings, and costumes (1969).

He actively developed the stages and costumes for various plays over the next three decades, including ‘My Fair Lady’ (1956), which led to film offers. For the film musicals ‘Gigi’ in 1958 and ‘My Fair Lady’ in 1964, he reprised his job as stage and costume designer. He was also a well-known diarist who was known for his sarcastic tone while describing people. During his lifetime, he released six volumes of his diaries (from 1922 till 1974).

He was known for photographing high-profile personalities such as Greta Garbo and Queen Elizabeth as a fashion and portrait photographer. His wartime images are considered to have been instrumental in persuading the United States to assist Britain during the difficult war years. He also worked as a stage and costume designer for Broadway shows and films, earning him critical praise and several significant awards for his efforts.

He had a number of men and women in his life, including swordsman Kin Hoitsma and actresses Greta Garbo and Coral Browne. He was enamored with art collector Peter Watson for years, despite the fact that the two men were never romantically involved. In 1972, he had a stroke that rendered him immobile on the right side of his body. Over the next few years, his health deteriorated, and he died in January 1980.

Cecil is one of the wealthiest photographers and one of the most well-known. Cecil Beaton’s net worth is estimated to be $1.5 million, according to Wikipedia, Forbes, and Business Insider.