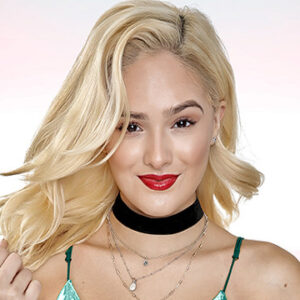 An American actress, dancer, choreographer, and YouTuber with the name of Chachi Gonzales. She is best known to audiences in the United States and around the world as the sixth-season champion of the dancing talent competition show “America’s Best Dance Crew” in 2011. She showed an early interest in dancing, and at the age of six, she began receiving professional training in the discipline. By the time she was a junior in high school, she had developed exceptional ballet and hip-hop dancing abilities. She first joined Marvelous Squad as a hip-hop dancer before switching to the I.aM.mE dance group. She then competed with them in the sixth season of “America’s Best Dance Crew,” where her hip-hop crew won. It was the start of a very successful career in dancing, and since then, she has taught dance abroad in various nations across the world, including Germany, Poland, India, China, and Thailand. Additionally, she has a YouTube channel with more than a million subscribers.

Olivia Gonzales gave birth to Chachi Gonzales in Texas, the USA. Her parents had left Mexico to emigrate. Chachi was the youngest and most adored of her parents’ five children, whose parents ran an apparel business. In Mexican, the name Chachi means “small girl.”

The seeds of Chachi’s ambition for pursuing a profession in dance were first planted when she was just a young child. When she was just six years old, her parents enrolled her in dance lessons. She began studying ballet at a nearby dance class, where she discovered that she had a natural talent for the performing arts and that ballet was not the only form she enjoyed.

She saw a hip-hop ensemble perform dances at an event three years later. Marvelous Motion was one of the crews that were taking part. She enrolled at Lanier Middle School to study hip-hop dancing because she was determined to master the genre.

She initially had trouble finding a rhythm, but she gradually got better, and after a few years, she was a proficient hip-hop dancer. She took charge of the group, performing to cheers at a few neighborhood functions.
As a result of Marvelous Motion’s dissolution in 2010, Chachi founded I.aM.mE with three other dancers from the group. This project served as a springboard for Chachi’s future success.

Through her ensemble, Chachi Gonzales managed to make her imprint on the American dancing scene, and as she ascended the success ladder, she won numerous contests and dancing competitions. But the renowned program “America’s Best Dance Crew” was the genuine turning point for her and I.aM.mE.

The crew, which had Chachi as its youngest member, won the top prize after putting on some spectacular dancing moves. She became quite renowned after this victory and started her YouTube channel the same year.
Later, Chachi performed as a backup dancer at the 2011 MTV Video Music Awards, where she paid homage to Britney Spears.

She and her group made an appearance in the Disney dance competition “Shake Up” in 2012, and they were a big hit. She was also honored with the title of “Teen Choreographer of the Year” at the renowned World of Dance 2012 Industry Awards in the same year.

She created the dance choreography for the song “We are Monster High” from the fashion doll line “Monster High” in 2013.
She starred as a significant cast member in the second season of “East Los High” and made her feature picture debut in 2014’s “The Legend of Darkhorse County.”

She received numerous acting awards for her numerous roles in movies and TV shows. She also made an appearance in the 2016 program “Make it Pop.”

She is also highly active on her YouTube channel, “Chachi Gonzales,” in addition to that. On the channel, she has more than 13,25,000 members. She constantly updates her viewers on her personal life events by posting cosmetic lessons, dance videos, and vlogs on her channel.

She has been invited to teach workshops and give lessons at several dance academies throughout the world as a result of her rising renown. As of right now, she has traveled to more than a dozen nations, including many more like Sweden, Poland, India, Thailand, Russia, Canada, and Belgium.

Aside from her dancing-related accomplishments, Chachi also runs a reasonably successful clothing business under the name “Dotheads by Chachi.”

Chachi Gonzales has a tight relationship with her family and attributes all of her achievements to her parents, especially her mother, who helped her through her formative years.
Her family has a business, and in 2011 they introduced a brand of sweatpants and clothing.

Internet superstars Josh Leyva and Chachi dated for two years before splitting up in 2017. On her YouTube channel, Chachi posted a few videos in which she was seen sobbing over her breakup and missing her ex-boyfriend.

One of the wealthiest dancers and one of the most well-liked dancers is Chachi Gonzales. Our study of Chachi Gonzales’s net worth from sources including Wikipedia, Forbes, and Business Insider indicates that it is roughly $1.5 million.