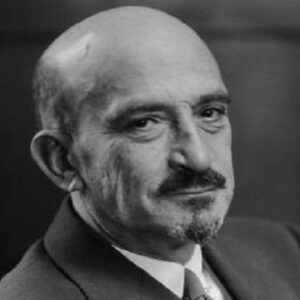 Chaim Weizmann was born into a large Jewish family, and he was always proud of his faith and culture. As a young adult, he went abroad to study science in depth. He finally settled in the United Kingdom to start his career as a chemistry teacher. He is the one who came up with the idea of industrial fermentation, in which a certain mix of chemicals is used to make a lot of something else. This discovery helped Britain a lot in the war, and many British cabinet members respected Weizmann for it. He used the new power he had here to fight for the Zionist cause. He thought that the Jews should have a place to live, and that place should be Jerusalem. He worked his whole life to get Jewish schools in Palestine, and he was the head of many pro-Zionist groups in Britain and around the world. He was chosen to be the first President of Israel because of these things. Even though the job was mostly for show, he used it to promote Israel around the world. Chaim Weizmann worked for a separate land for Jews for the rest of his life. He was a strong supporter of the Zionist cause. In honor of what he did for science, the University of Manchester gives an award every year that is named after the famous scientist.

Rachel, who was a housewife, and Oizer Czermerinsky Weizmann, who sold wood, had him. He was one of a group of fifteen kids.

At age 18, he moved from what is now Belarus to Germany to study chemistry. He went to the “Polytechnic Institute of Darmstadt” and then the “Technische Hochschule” in Berlin to learn about engineering. He got his Ph.D. in organic chemistry from Switzerland’s “University of Fribourg.”

He started teaching at the “University of Geneva” in 1901. Three years later, he was a senior lecturer at the “University of Manchester” in England. Here is where he started to lead the British Zionists.
Also in 1901, he worked with Martin Buber and Berthold Feiwel to push for a Jewish school in Palestine. The “Technion – Israel Institute of Technology” was finally set up after 11 years.

During his time at the “University of Manchester,” which started around 1904, he figured out how to use bacterial fermentation to make more of something. This scientific method, which is now called “acetone-butanol-ethanol fermentation,” helped a lot during World War I.

Scientifically, he found out how to use fermentation in factories. This earned him the respect of the British cabinet, which made them more open to his Zionist goals. In 1907, he went to Jerusalem and helped start the “Palestine Land Development Company.” This was a more practical way for him to show that he was a Zionist.

In 1917, as the President of the “British Zionist Federation,” he worked with Alfred Balfour to make the “Balfour Declaration.” This helped the idea that the Jewish people should live in Palestine. Weizmann put out a statement defending his kind of Zionism, saying that it was just a Jewish longing for home and nothing else.

In 1919, he started a peace treaty and signed an agreement with the Arab Prince Faisal that was meant to help Arabs and Jews get along better.
He was named president of the “World Zionist Organization” in 1920, and he and Albert Einstein worked together to raise money for a Hebrew University in Jerusalem.

In 1934, Zionists gave money to start the “Daniel Sieff Research Institute.” Weizmann did his research in these labs. He was also the President of the group in charge.

In 1936, he talked about how the Zionist cause had lost support over the past ten years. He tried to get people angry by saying that 6 million Jews were banned from living in many places around the world.

During the Second World War, this group became the Jewish Brigade and fought on the front in Italy. But as the violence grew in Palestine, Weizmann became less interested in the movement, and his power within the group began to decline.

In 1949, he became the first person ever to be elected President of Israel. This job was mostly for show, but he was able to meet with US President Harry Truman and get him to agree to recognize the new country of Israel. He was in this job until he died.

In 1904 and the years that followed, he started to learn about industrial fermentation. Using a chemical formula, it became easier to make a lot of the same thing after this was found. This helped the British a lot in World War I, and Churchill and his staff respected him for it.

He was a strong supporter of the Zionist cause his whole life. He was president of their worldwide alliance in 1920.
He was chosen to be Israel’s first president in 1949. He was able to persuade the US and many other countries to recognize Israel as a real country, even though this was mostly a formality.

In the 1920s, he was chosen again and again to be the honorary president of the British Zionists. After spending his whole life fighting for the Zionist cause, he was asked to be Israel’s first president.

In 1906, he married Vera Weizmann, and the two of them had two children: Benjamin and Michael. Michael was killed in World War II while serving in the Royal Air Force. His plane was shot down.

His nephew, Ezer Weizmann, became the president of Israel, just like his uncle.
In 1949, they changed the name of the Daniel Sieff Research Institute to the Weizmann Institute of Science to honor him. In the same year, he wrote a book called “Trial and Error: The Autobiography of Chaim Weizmann.”

The “Weizmann Prize for Biochemistry” is given each year by the “University of Manchester” to an undergraduate senior who shows promise in the field.

Chaim Weizmann is estimated to have a net worth of $4 million, most of which comes from his work as a teacher, autobiographer, politician, university professor, and chemist. We don’t know enough about Chaim Weizmann’s cars or his way of life.

This well-known person became a British citizen in 1910, but he gave up that citizenship 38 years later to become the President of Israel.

This famous person’s Jewish background was important in every part of his life. He met his wife Vera at a meeting of their school’s Zionist club.

The famous politician was sick and staying in a hotel room in New York City when he heard that he had been nominated for President of Israel. He accepted the nomination.