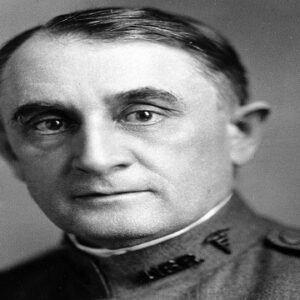 Charles Horace Mayo was an American physician who, with the help of his brother and others, co-founded the Mayo Clinic. He was an adept in all surgical specialties, with a specialization in neurosurgery and cataract surgery. In addition, he developed a number of current goiter and orthopedic surgery techniques. He is most recognized, though, as one of the founders of the Mayo Clinic, a world-renowned medical treatment, research, and training center in Rochester, Minnesota. Charles and his older brother William attended their doctor father on professional visits since they were children, watching him make diagnoses, prescribe treatments, and subsequently help in surgeries. As a result, the brothers were nearly destined to study medicine, and once they graduated from medical school, they joined their father in his own practice. When their father retired, they were joined by additional doctors, and the Mayo Clinic was born. With a few decades under their supervision, the forty-five beds surgical clinic they built in 1903 grew into a multi-building integrated medical facility.

Charles Horace Mayo was born in Rochester, Minnesota, on July 19, 1865. William Worrall Mayo, his father, was a British-American doctor and chemist. He was a descendant of John Mayow, a famous English scientist who immigrated to the United States in 1846 and went on to get his medical degree from Indiana Medical College.

Louise Abigail Wright, his mother, was a remarkable woman who was committed to providing a solid education for her children. Charles was the younger of their two boys, and the couple had five children. William James Mayo, his older brother, was four years his senior. They had three sisters, with Gertrude being the oldest.

Despite the fact that the brothers were sent to the local school, their education did not stop there. They studied Latin, literature, and painting at the Rochester Training School. They were also encouraged by their parents to read established authors’ works from the household library.

They also worked with their father on physics, chemistry, and anatomy. While they were busy doing chores around the house, he also taught them about various aspects of medicine.

While going around the family farm, their mother taught children botany and assisted them in identifying flora. She also had a telescope installed on the roof top to stimulate their interest in astronomy.
They were also taught about discrimination and the dangers of conflict. As a result, kids were able to establish social ideals at a young age. They also accompanied their father on his professional calls, which was an unusual feature of their upbringing.

They first saw their father diagnose the illnesses and prescribe medication. If an operation was required, they were given extremely simple jobs to begin with before progressing to more severe responsibilities such as giving anesthetic or tying up blood arteries.

Rochester was ravaged by a devastating tornado on August 21, 1883, when Charles Mayo was in his final year of school, and many people were killed and injured. During that time of difficulty, Charles assisted his father and brother, who was a qualified doctor at the time, in caring for the sick.

After graduating from high school, Charles Mayo followed in his father’s footsteps and enrolled in Chicago Medical College (later Northwestern University), graduating in 1888. He subsequently returned to Rochester to work with his father, who was known as “Old Doctor Mayo” at the time.

Charles Mayo began his career as an assistant to his father, assisting him in his own business. The town did not have a hospital at the time. The Sisters of Saint Francis of Rochester, however, chose to build one after the tornado, when patients had to be treated in a dance hall.

The nuns approached old Dr. William Worrall Mayo, led by Mother Mary Alfred Moes, and with his encouragement, they raised enough money to create a hospital. Saint Mary’s Hospital, the forerunner of the Mayo Clinic, opened its doors in Rochester on September 30, 1889.

Charles and William had now joined their father, who was 70 years old at the time, in serving the hospital. The younger Mayos began seeing patients while Senior Mayo functioned as the consultant physician. They began doing procedures after that, with the Sisters of Saint Francis acting as nurses.

Charles Mayo is thought to have done the first operation at Saint Mary’s, and Edith Graham, who subsequently married Charles, was the hospital’s first nurse anesthetist.

Charles Mayo quickly rose to prominence as a surgeon. Patients from all over the world began to flock to Rochester to be treated by him because of his ability to work in all surgical specialties.

It was soon hard to keep up with the influx of patients at the hospital. “The crowd in the waiting area is the closest thing to a crowd after tickets to a football match that I have ever seen in any such function,” eye witness Dr. Wilfred T. Grenfell once said.

The Sisters were finally forced to declare that no patient would be admitted to the hospital unless the Mayo brothers recommended him. As a result, Mayo’s private practice began to see an increase in patients.

Mayo Clinic is a medical center in Rochester, Minnesota.
Senior Dr. Mayo withdrew from active duty in 1892, leaving his hospital and private business in the hands of his sons. Before doing so, he requested Dr. Augustus W. Stinchfield, one of the best doctors he knew, to join his sons in their expanding business, which he gladly accepted.

Dr. Christopher Graham, Dr. E. Star Judd, Dr. Henry Stanley Plummer, Dr. Melvin Millet, and Dr. Donald Balfour joined the practice as it grew. They shared the revenues of the private group practice at first, while other employees were employed on a wage basis.

They founded the ‘Mayo Clinic’ jointly in 1903. It started out as a surgical clinic. Its reputation grew quickly when Charles Mayo pioneered major approaches in thyroid, neurologic, cataract, and orthopedic surgery. They quickly began extending their facilities.

Charles Mayo continued to practice surgery at St. Mary’s Hospital until 1905, when he quit. Following that, he focused only on the Mayo Clinic, where he was in charge of ophthalmology patients until 1908.
Then his father, the Senior Mayo, died in 1911. The Mayo Clinic had begun to surpass its existing capacity by 1914, and a new structure was constructed to fully express the integrated group medical practice.

Throughout World War I

When World War I broke out, Charles Mayo was sent to the US Army Medical Corps as a Colonel. He alternated as the associate chief adviser for surgical care of US Army soldiers with William, who was named top adviser for US Army surgical services in the US Army Surgeon General’s office.

Charles was admitted as a member of the Committee of American Physicians for Medical Preparedness in 1916, when President Woodrow Wilson established it with William as its head.

For both Mayo brothers, the war years were a stressful time. Apart from normal business, there were draftees to be inspected and new medical corps recruits to be trained at Mayo Clinic. As a result, it became necessary for one of them to be at Mayo Clinic at all times.

As a result, the two brothers continued to alternate between Rochester and Washington throughout the war years, ensuring that one of them was always present in Rochester. Only once was the timetable violated, in 1918, when William was diagnosed with acute jaundice and was forced to leave the army for two months.

Charles Mayo’s contribution to the country throughout the war years was not unappreciated. He was promoted to Brigadier General in the United States Army Reserve after the war.

Mayo Clinic became a non-profit corporation in 1919, and the Mayo Brothers founded Mayo Properties Association. Previously, the partners were paid a percentage of the profits. Except for Charles and William Mayo, all other partners began to be paid after that.

Charles Mayo remained with the organization until his retirement in 1930. He stayed involved on the Mayo Clinic Board of Directors until his death a few years later.

The founding of the world-famous Mayo Clinic in Rochester, Minnesota, which he co-founded with his brother and other important doctors, was Charles Horace Mayo’s greatest achievement. The clinic, which is now a nonprofit medical practice and medical research organization, is credited with altering the way health care is delivered in the United States.

Edith (Graham) Mayo was Charles Horace Mayo’s wife. She had been his nurse anesthetist for his first surgery at St. Mary’s Hospital. Charles William Mayo and Joseph Graham Mayo, both of whom worked at the Mayo Clinic, were their sons.
Following his retirement, Charles Horace Mayo and his brother William purchased adjacent estates in Tucson, Arizona, where they spent the majority of their winters. They did, however, come to Rochester frequently because they were still members of the Mayo Clinic Board of Directors.

William was diagnosed with cancer in 1939 while visiting Rochester. When Charles learned of this, he traveled to Rochester to meet him before continuing on to Chicago, where he had an appointment with his tailor. He had pneumonia while in Chicago and died on May 26, 1939.

Charles Mayo left behind a prosperous institution that began with 45 beds and one operating room when he died. The Mayo Clinic had evolved into a hospital complex with a number of buildings and more than 1,000 beds by the time he resigned in 1930. They saw tens of thousands of patients each year.

Charles Mayo was known for his memorable quotes. “One of the major flaws in our educational system in this country is that we place too much emphasis on memory development and too little on mental development; we place too much emphasis on gaining knowledge and too little on sensible application of knowledge,” he once observed.
“The definition of a specialist as one who knows’more and more about less and less’ is good and true,” he is supposed to have said at another occasion.

Mayo Clinic amalgamated with St. Mary’s Hospital and Rochester Methodist Hospital in 1986. In Florida, Arizona, Iowa, Minnesota, and Wisconsin, it now operates a network of clinics, hospitals, and health-care facilities.