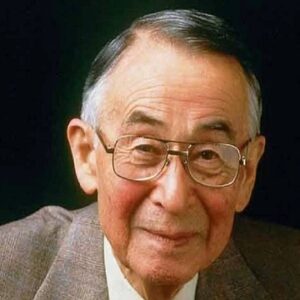 Charles J Pedersen was an American organic scientist who pioneered the description of crown ether synthesis procedures. In 1987, he was awarded the Nobel Prize in Chemistry, which he shared with Donald J Cram and Jean Marie Lehn, the researchers who carried out his research. Pedersen was the first DuPont scientist to win the Nobel Prize, and he was one of just a few scientists to get the honor while not having earned a doctorate. Pedersen began his career as a scientist at the University of Dayton in Ohio, where he studied chemical engineering. He subsequently went on to the Massachusetts Institute of Technology to get his master’s degree. Pedersen, while being a talented student, did not want to be supported by his father and thus abandoned his studies to work. He went to work for the DuPont Company, where he stayed until his retirement. Pedersen’s magnum work came after the age of 60, unlike most scientists who peak in their careers in their mid-30s or early 40s. He was investigating the effects of bi- and multidentate phenolic ligands on the catalytic characteristics of the vanadyl group, VO, when he discovered unknown crystals of a by-product by mistake. Fascinated by it, he continued his research, unaware that it would lead to a new chapter in chemistry. Crown ethers, a molecule including hydrogen, carbon, and oxygen atoms, were discovered by him. The Nobel Prize was granted to him for this discovery.

Breder Pedersen and Takino Yasui had Charles J Pedersen on October 3, 1904, in Busan, on the coast of south-east Korea. His mother was Japanese and his father was Norwegian.

Pedersen and his family moved to Nagasaki, Japan, when he was eight years old. He enrolled in a convent school there. He went to Yokohama two years later and enrolled at St Joseph College, an international school.

Pedersen was accepted to the Massachusetts Institute of Technology after completing his bachelor’s degree. He went on to earn a master’s degree in organic chemistry from there. Pedersen did not pursue a Ph.D. degree, despite his professor James F Norris’ urging, and instead began a career because he did not want to be a burden on his father any longer.

The Career of Pedersen

Pedersen was hired by DuPont Company in Wilmington, Delaware in 1927 after his professor Norris recommended him. William S Calcott, a DuPont employee, led Pedersen to the Chambers Work’s Jackson Laboratory for research. He spent his whole 42-year career as a chemist with DuPont, 32 years in Jackson Laboratory, and the final ten years at the Experimental Station.

Pedersen was given a variety of common challenges to work on during his early days as a scientist. His first achievement was a breakthrough in the production of tetraethyl lead. The discovery had a significant commercial impact.

Later, he began looking for oil-soluble copper precipitants. He discovered the first effective metal deactivator for petroleum products, gasoline, oils, and rubber while working on the project.

Pedersen became fascinated by the effects of different ligands on the catalytic capabilities of copper and the transition elements after discovering the metal deactivator. As a result, he worked in the field for several years.

Following his research into copper’s catalytic characteristics, he became interested in the oxidative degradation of the substrates he was dealing with, such as petroleum compounds and rubber.

By 1940, he had made a name for himself as a chemist, specializing in antioxidants. He was hired as a research associate at DuPont because of his scientific aptitude and knowledge of the subject.

It was the highest position a DuPont researcher could achieve at the time. He was given the opportunity to choose his own initiatives as part of his new position.

Pedersen’s scientific interests broadened in the late 1940s and early 1950s. He became fascinated by the photochemistry of phthalocyanine adducts and quinone imine dioxides. He created some new polymers as well as polymerization initiators.

When DuPont’s Organic Chemicals Department was split into two departments, Elastomers and Orchem, in 1957, Pedersen chose the former. For the next eight years, he worked at the Experimental Station, where the Elastomers Department was based.

Pedersen returned to coordination chemistry research in 1960 after a brief detour with hydrocarbon polymers. He investigated the catalytic characteristics of the vanadyl group, VO, using bi- and multidentate phenolic ligands.

One of the studies while researching the complexes of the vanadyl ion VO resulted in the creation of an unexpected tiny quantity of unknown white crystals. He investigated the by-product and identified it as dibenzo18-crown-6, first crown ether.

He spent the last nine years of his life researching crown ethers, a previously unknown branch of chemistry. He published two books in 1967 that have now become classics.

He detailed the methods for manufacturing crown ethers in his paper (cyclic polyethers). The donut-shaped molecules were the first in the sequence of exceptional compounds that developed stable structures with alkali metal ions.

In 1969, he stepped down from DuPont. He took a sabbatical from research after retirement to pursue other hobbies such as gardening, fishing, poetry, and so on.

Pedersen’s career reached a pinnacle in the 1960s when he discovered crown ethers, a family of ring-shaped molecules with the potential to bind particular metallic atoms in the ring’s middle. As a result, metallic atoms could be liberated from inorganic compounds, causing a chemical reaction to occur.

The possibility of causing chemical reactions in laboratories and producing chemical compounds by releasing metallic atoms from organic molecules was unfeasible prior to the discovery of crown ethers.

Pedersen was awarded the Nobel Prize in Chemistry in 1987 for his work on the invention and application of molecules with highly sensitive structure-specific interactions. He was awarded the prize alongside Donald Cram and

Jean-Marie Lehn, who built on his original findings.
The DuPont Company also awarded him an excellence medal.

In the late 1940s, Charles J. Pedersen and Susan Ault married. The couple made their home in Salem, New Jersey.
He was diagnosed with myeloma in 1983. He became progressively fragile and weak as a result of his illness. On October 26, 1989, in Salem, New Jersey, he passed away.

Pedersen was one of the rare people to be awarded a Nobel Prize in Science without having earned a Ph.D.