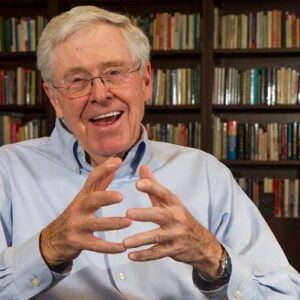 Charles Koch is the co-owner and Chief Executive Officer (CEO) of Koch Industries, an American businessman and philanthropist. The company was passed down to Charles and his younger brother David by their father, Fred Koch, who launched it in 1940. The brothers, particularly Charles, were instrumental in building the company and transforming it into one of the country’s largest privately held corporations. Charles was born into an industrialist’s family as one of four sons, and he was brilliant and hardworking from an early age. He was also a bright student who studied engineering at the Massachusetts Institute of Technology (MIT) and received two Master’s degrees, one in mechanical engineering and the other in chemical engineering. Following his studies, Charles worked for a time at Arthur D. Little, Inc. before joining his father’s company, Rock Island Oil & Refining Company. He soon rose to the position of president of the company, which he called Koch Industries in honor of his father. He is also interested in politics, and he and his brother David have contributed significantly to libertarian and conservative think tanks and campaigns. He has donated millions of dollars to fund research, policy, and educational endeavors as a significant philanthropist.

Charles Koch was born in Wichita, Kansas, on November 1, 1935, to Mary and Fred Chase Koch. His father was an engineer who eventually became a businessman and formed Koch Industries. Frederick, David, and William are Charles’ three brothers.

He went to work for Arthur D. Little, Inc. after graduation. However, he only stayed in this employment for a brief time before returning to Wichita in 1961 to work for his father’s company, Rock Island Oil & Refining Company.
He was a hardworking young man who was anxious to grow the family business, which by the late 1960s had grown into a medium-sized oil company. In 1967, he took over as president of the company and renamed it Koch Industries in honor of his father. Since then, he has also served as Chairman of the Board and CEO.

He worked relentlessly to expand the company, which is now active in a variety of industries including petroleum, chemicals, energy, fiber, intermediates and polymers, minerals, fertilizers, pulp and paper manufacture, refining, and distribution.

He joined Koch Industries’ board of directors in 1982 and also serves or has served on the boards of Entrust Financial Corp. and Georgia-Pacific LLC, all of which deal with paper and pulp goods.
The Koch Industries underwent an extraordinary rate of expansion under Charles Koch’s leadership, and it now has a presence in about 60 countries across the world, employing more than 100,000 people.

Charles Koch attributes his amazing success to the Market Based Management (MBM) business philosophy, which he created. In his 2007 book, ‘The Science of Success: How Market-Based Management Built the World’s Largest Private Company,’ he explains this theory in detail.

Through their affiliation with Wichita State University, the Market-Based Management Institute, an educational non-profit, teaches MBM ideas to students, educators, community leaders, and government officials (WSU).
He is a libertarian who supports free-enterprise policies and advocacy groups. He is a supporter of the Cato Institute, the Institute for Humane Studies, the Bill of Rights Institute, and the Mercatus Center at George Mason University, among other free market think tanks.

Charles Koch has played a major role in converting Koch Industries from a medium-sized enterprise to one of the largest privately held firms in the United States as co-owner, chairman of the board, and Chief Executive Officer (CEO). More than 930 medals for safety, environmental excellence, community responsibility, innovation, and customer service have been given to Koch Industries.

In 1994, the American Legislative Exchange Council gave him the Adam Smith Award.
The New York Mercantile Exchange awarded him the Directors’ Award for Global Vision in Energy in 1999.
In 2003, the Heritage Foundation awarded him the Spirit of Justice Award.

Charles Koch is a very private man who prefers to stay out of the spotlight. He also takes great care to protect his family’s privacy. He has two children with his wife Liz, whom he married in 1972. He has survived prostate cancer.

Charles Koch’s net worth was estimated to be $46 billion.

He is a well-known philanthropist who focuses on sponsoring organizations that promote free-market principles in the domains of research, policy, and education. He has supported economists such as James Buchanan and Friedrich Hayek in their study. He has donated millions of dollars to causes that he believes in. In 2014, Koch Industries and the Koch family foundation gave Wichita State University $11.25 million.