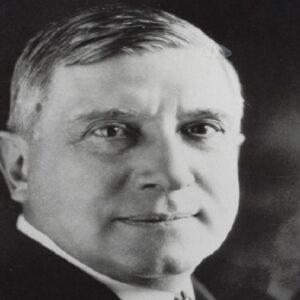 Charles M. Schwab was a well-known American industrialist and steel mogul. He was the president of Bethlehem Steel, which grew to be the world’s second largest steel producer and one of the world’s greatest heavy manufacturers. His discovery of wideflange steel beams for enormous steel production revolutionized the infrastructure sector. Thomas Edison dubbed him “Master Hustler” for his manipulative skills and risk-taking propensity. During World War I, Schwab made significant advances in steel production, giving the company a monopoly. He was also noted for his opulent lifestyle and exorbitant spending, and he possessed some of the most opulent homes of his time. He was an excellent manager who knew how to manage a team. Dale Carnegie’s most renowned publication, “How to Win Friends and Influence People,” released in 1936, described his current methods of working with employees. In 1982, he was inducted into the Junior Achievement United States Business Hall of Fame.

Charles Michael Schwab was born on February 18, 1862, in Williamsburg, Pennsylvania, to John Anthony and Pauline Farabaugh Schwab. His paternal and maternal grandparents were both German Catholic immigrants. Schwab grew up in Loretto, Pennsylvania, and went to Saint Francis College, which later became Saint Francis University. He moved to Pittsburgh to look for work after two years of college. Schwab began his work as a stake driver for the steel magnate Andrew Carnegie’s company, Edgar Thompson Steel Works.

He rose through the ranks, eventually becoming assistant manager in the early 1880s and manager in 1887. After a major strike at the Homestead steel plant, he was recruited by Andrew Carnegie five years later to restore relations between management and workers. Schwab’s brilliant management skills not only mended the relationship between labor and management, but also improved the plant’s productivity dramatically. Schwab became the president of Carnegie Steel Company in 1897, at the age of 35, after a spectacular climb.

After a falling out with Morgan and fellow US Steel executive Elbert Gary, Schwab quit USS in 1903. In Bethlehem, Pennsylvania, he went to work for the Bethlehem Shipbuilding and Steel Company. United States Shipbuilding Company was already well-known for its shipyards in California, Delaware, and New Jersey because to its solvent presence. It grew to become the world’s largest independent steel production under the leadership of Schwab. The creation of the H-beam was a major factor in Bethlehem Steel’s success. The fact that Schwab sought to mass produce wideflange steel beams, which was a very dangerous endeavor, demonstrated his adventurous character. It necessitated a large sum of money and the construction of a new factory. Furthermore, the eventual product’s commercial viability was in doubt. However, when Bethlehem Steel began manufacturing the beam in 1908, it completely transformed the face of building construction and heralded the dawn of the skyscraper era. Bethlehem Steel rose to become the world’s second largest steel producer as a result of its performance.

The following year, Bethlehem Steel founded Bethlehem Steel F.C., a company soccer team. Schwab turned the club professional in 1914, and the team went on to win eight league championships, six American Cups, and five National Challenge Cups in the following years. It went on to become one of the best soccer teams in American history. During World War I, Bethlehem Steel gained a monopoly on contracts to sell specific types of armaments to the Allies. Schwab traveled to Europe frequently during this time to oversee the manufacture and supply of ammunition to the Allies. He even used the United States’ neutrality regulations to get commodities via Canada. On April 16, 1918, Schwab was appointed Director General of the Emergency Fleet Corporation, succeeding Charles Piez, the corporation’s former General Manager. Congress gave this board power over all shipbuilding in the United States. He stopped using the cost-plus-profit contracting structure and started using fixed-price contracts instead. Schwab was accused of profiteering after America entered the war, although he was later acquitted.

Schwab has long been recognized for taking calculated risks. Thomas Edison affectionately referred to him as “Master Hustler.” Schwab is noted for giving a startling amount of $200,000 as a ‘present’ to the mistress of Grand Duke Alexis Aleksandrovich in order to obtain a contract from the Trans-Siberian Railroad in one of his life’s occurrences. For his “great services to the steel industry,” he was awarded the Bessemer Gold Medal in 1928. He eventually amassed a large fortune and possessed some of the world’s most opulent and expensive homes. For an incredible US$7 million, Schwab erected “Riverside” in New York, which was the most ambitious private mansion ever built in the city. He also owned “Immergrün,” a luxurious 44-room vacation home. Schwab was also known for his extravagant spending, extramarital affairs, and high-stakes gaming. Schwab had already spent between $25 million and $40 million before the Great Depression arrived. Following financial losses during the internecine 1928-1929 ‘Soccer Wars,’ his employer, Bethlehem Steel, was forced to dismantle its champion soccer club. The stock market plummeted during the Great Depression in 1929, wiping out all of Schwab’s money. His his interests in Bethlehem Company had lost value, and he was over $300,000 in debt.

Emma Eurania Dinkey was Schwab’s wife. He was, however, well-known for his numerous extramarital affairs. He and his wife Emma had no children, although he did have a daughter with his mistress.

Forbes estimates his net worth to be $10.6 billion as of May 2021, making him the 210th richest person in the planet.

Schwab’s personal wealth was believed to be $200 million in the 1920s. However, due to his infamous spending habits and the Great Depression of 1929, he lost his vast fortune. As a result, Schwab spent the last five years of his life borrowing money from friends. He had a modest apartment with his roommate. Due to heart failure, Schwab died on October 18, 1939 in London, England. He was buried beside his wife in Loretto’s Saint Michael’s Cemetery.