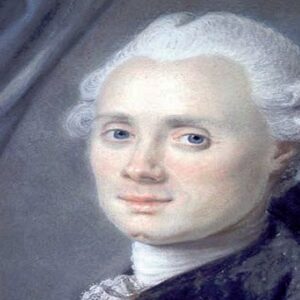 French astronomer Charles Messier discovered nebulae and star clusters. Starting out as a draftsman for a famous Navy astronomer in Paris, he quickly became his own acute observer. With a 100 mm refracting telescope, he began watching the sky from his master’s observatory on the Hôtel de Cluny in central Paris. So he could record all objects in the sky from the north celestial pole to a declination of 35.7°. A list of nebulae and star clusters is his most famous discovery. Some of the items on the ‘Messier’s List’ had been observed by others before him. Messier listed them all to help comet hunters distinguish between permanent and fleeting objects in the sky. Astronomers still use the objects on the list, M1 to M110, as important references.

Charles Messier was born on June 26, 1730 in Badonviller, Meurthe-et-Moselle, France. As part of the Principality of Salm (an autonomous state lying between Lorraine and France), it was then.
His father, Nicolas Messier, was a court usher for Salm. Charles, born eighth, was one of six children he and Françoise B. Grandblaise had.

Nicolas Messier died in 1741, and the family’s financial situation deteriorated. Then another tragedy struck the family. Charles fell out of the window while playing at home and shattered his thigh.
Hyacinthe, 24, had taken over the household by then. He drew Charles from school. His elder brother taught him for eight years. A keen sense of observation and curiosity helped him become a renowned astronomer.

When Charles became interested in astronomy is unknown, but it was probably in 1744. In that year, a huge 6-tailed comet, C/1743 X1, arrived in the sky, visible to the naked eye. It captivated the youngster.
On July 25, 1748, Badonviller saw a partial annular solar eclipse. This piqued his curiosity in the subject. Three years later, he was able to turn his hobby into a career.

The Salm Princes lost Badonviller in 1751. Hyacinthe chose Senones for his former masters’ sake. Charles, then 21, was offered two jobs in Paris.
One was with a palace curator and the other was with astronomer Joseph Nicolas Delisle of the French Navy. Hyacinthe, thinking the second job was superior, took it for Charles.
Charles Messier left Badonviller on September 23, 1751, arriving in Paris on October 2. After building his own observatory at Cluny, Delisle joined the Collége Royal de France in Paris. Charles moved into Delisle’s Collége Royal flat.

A big map of China was his first task. The College assigned him to an unheated large hall for that. Meanwhile, he went to Delisle’s observatory, where he was introduced to the apparatus and told to record his observations.

Beginning as a draftsman and record-keeper, Charles Messier soon became an astute observer. His first Mercury transit sighting was on 6 May 1753.
In 1754, Messier was a Navy Depot Clerk. Simultaneously, he studied elementary astronomy with Delisle, who persuaded him of the value of measuring exact positions of observations. His catalogue would subsequently be known for its precision.

Messier looked for Halley’s Comet in 1757, expecting it to reappear in 1758. During his quest, he came upon several fixed diffused heavenly objects that resembled comets. The first was a dwarfed Andromeda Galaxy partner.
On August 14, 1758, he discovered a new comet, which he studied until November 2. Sadly, De la Nux had discovered this comet on May 26, 1758, and named it C/1758 K1 De la Nux.

He found another comet-like patch in Taurus on August 28, 1758, while viewing C/1758 K1 De la Nux. Because it was stationary, he concluded it was a nebula and not a comet. He began measuring its position on September 12, 1758.

Messier 1 (M1) became his first catalogue entry. It was later identified as the Crab Nebula, a relic of supernova 1054.
Charles Messier now had two goals. He began seeking for new comets with his telescope, spawning a new astronomical field called comet-hunting, and cataloguing comet-like nebulous objects.
On January 21, 1759, he found Halley’s comet. But it didn’t fit Delisle’s chart, and the elder astronomer refused to accept it. He told Messier not to tell anyone but to keep looking.

In 1760, Messier detected another comet, but Delisle again refused to let him proclaim it. Frustrated, he dug deeper into the topic. Now that he has retired from active astronomy, Delisle can give Messier more freedom.

In 1764, he produced his first original discovery. On May 1, he discovered a globular cluster in Canes Venatici and named it M3. While others had detected M1 and M2, he was the first to locate this cluster.
In the same year, he named M4 through M40 nebulae. Nineteen of them were his own findings. Others had discovered or catalogued the rest.

Then came M41 and Comet 1766 Messier in 1766. He was previously the Navy’s Depot Clark. In 1767, he went on a long cruise to test new chronometers as the Navy’s Astronomer.

On his return, he continued his hunt for fresh objects, adding four more to his list in 1769, naming them M42-M45. But it took five years longer to publish the first list.
He then searched for newer comets and clusters, finding several. His catalogue had 80 items by 1780, and he published a second edition the same year. In August, he and Pierre Méchain cataloged additional nebulae.
The teamwork was quite good. This brought his list to M100 by early 1781. Later that year he added M101-M103, which Méchain discovered independently. Méchain discovered Messier’s last object, M107, in 1782.

In 1790, he corrected M31 and M32 and measured stars in M44 and M45. His next find was comet 1793 Messier. Then came the ‘Year of Terror’.
By 1794, he had lost both his Academie and naval pensions. The navy stopped paying his observatory rent. Pierre Méchain lost his estate and savings. They couldn’t work until 1795, when they measured M31, M32, and M110.
In 1795, Messier and Méchain joined the National Institute of Sciences and Arts, the Academy’s successor. He joined the Bureau of Longitude in June 1796.

On April 12, 1798, he discovered Comet 1798 Messier. Soon after, his eyesight deteriorated, and he couldn’t work alone. He saw the comets in 1805 and 1806 but could not pinpoint their position. His Great Comet of 1807 was noticed by others.

Although he discovered many comets, Charles Messier is famous for his extensive list of nebulae and star clusters. The ‘Catalogue des Nébuleuses et des Amas d’Étoiles’ was first published in 1774 with only 45 celestial objects.

In 1780, 35 more items were added to the list, bringing the total to 80. The final list of 1781 added 23 more.
Later in the twentieth century, astronomers discovered evidence of seven additional Messier objects not included in the list. They officially designated them M101-M107 and added them to Messier’s List.

Charles Messier was made a Royal Society Fellow in 1764.
As a foreign member of the Royal Swedish Academy of Sciences in 1769.
Académie Royale des Sciences, Paris, 30 June 1770.
Napoleon Bonaparte gave him the Legion of Honor Cross in 1806.

Married Marie-Françoise de Vermauchampt on November 26, 1770. They met in Collége de France 15 years ago. They first tolerated the Delisles. On October 31, 1771, they moved into the Hôtel de Cluny, which housed the Observatory.

On March 15, 1772, Antoine-Charles was born. But on March 23, eight days after giving birth, his wife died. On March 26, the youngster died.
Charles Messier’s eyesight deteriorated towards the end of his life. He had a stroke in 1815 that left him partially paralyzed. He eventually recovered partially, but daily life grew increasingly tough.

He died on April 12, 1817, in Paris. His age was 87. On April 14, he was interred in Paris’ Père Lachaise Cemetery.
Messier, a lunar impact crater in the Mare Fecunditatis, was named for him. Asteroid 7359, found at Klet Observatory on January 16, 1996, was likewise renamed in his honor.