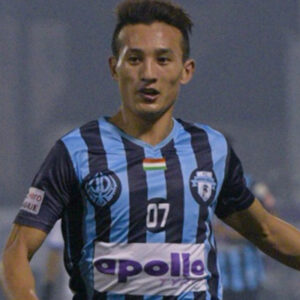 Chencho Gyeltshen is a forward who competes for both the Minerva Punjab FC team of the Indian Super League and the Bhutanese national football team. He is the greatest Bhutanese scorer of all time and has a number of goals on the international stage to his name. He was raised in Bhutan’s Paro District and is known as the “Ronaldo of Bhutan” because of his playing style, which is reminiscent of the Portuguese footballer Cristiano Ronaldo. Early in his adolescence, Chencho began playing football when he joined the “Bhutanese National League” team “Yeedzin.” He played for “Thimpu F.C.” and “Druk United F.C.” in fast succession. He received invitations to play in the local leagues of Nepal and Thailand as his fame continued to skyrocket. He was formally hired by “Minerva Punjab F.C.” in August 2017, and two weeks after playing in his first “I-League” match, he scored a hat-trick against “Bengaluru FC.”

On May 10, 1996, Chencho Gyeltshen was born into a lower-middle-class family in Shaba Gewog, Paro District, Bhutan. Even though Bhutan’s FIFA ranking may not be very high, there is a certain football culture there, thus Chencho’s decision to take up the sport made sense.

When Chencho was in primary school, he began playing football primarily for enjoyment. He spent more time playing with his older brother, although Chencho was more engaged in martial arts. He never thought much of football as a sport until he saw Cristiano Ronaldo play in the “English Premier League.” Chencho developed a passionate admiration for the Portuguese player and attempted to concentrate more on his playing abilities.
He went to Kelki International School and was familiar with Bhutan’s nightlife. Despite the inadequate infrastructure, he overcame all obstacles, sharpened his talents, and eventually saw the fruits of his labor.

After watching him play, his older brother immediately saw Chencho’s great potential. At the age of 12, Chencho joined the neighborhood club ‘Yeedzin’ in 2008 thanks to the urging of his brother. After five years, he established himself as one of the team’s top players and was a key contributor to Yeezdin F.C.’s victory in the Bhutan National League Championship.

He and his team continued their winning ways in the 2013 King’s Cup, when they advanced to the championship game. He scored twice in the decisive game against Nepal’s “Manang Marshyangdi,” but it wasn’t enough to secure victory.

Bigger and greater things were in store for him after his stunning performances. He joined the Druk United squad in the Thimpu League in 2014. He led the team in the 2014 King’s Cup, and his two goals against the Indian side “Mohun Bagan” increased his notoriety and visibility.

With a contract with “Thimpu FC,” he became the best Bhutanese football player to emerge in years. He also became the league’s top scorer with 10 goals in 17 games. His connection to “Surin City F.C.” furthered his rise to popularity.
Numerous South Asian football clubs began to approach Chencho, but he chose to concentrate on his education. He joined “Buriram United” in the “Thai Premier League” in 2015. His time in Thailand was quite successful, and he eventually caught the eye of the Indian I-League, the biggest football league in all of Southern Asia.

Delhi Dynamos and Pune City, two Indian clubs, expressed interest in signing him, but nothing concrete resulted from it. Later, Chencho admitted that the opportunity to play with numerous international football stars made him glad to join the “Indian Super League.” His winning record continued with “Buriram” in Thailand, and in 2015, his squad won the “Coke Cup” Under-19 title.

His trial with “Buriram” came to an end in July 2015, and he was then signed by the Thai team “Surin City.” The team’s manager, Alexandre Gama, was eager to recruit Chencho and personally gave him the contract. Chencho accomplished history by being the first football player from Bhutan to ever play for a foreign team. Despite the fact that it was later discovered that he had actually been signed by “Buriram United” and was only ever a loan player for “Surin City.”

In the first eight games that he appeared in, he scored eight goals, emerging by September 2015 as Surin City’s top scorer in the league title. Despite a brilliant effort, his club came just short of making the playoffs.

Chencho departed “Buriram” in March 2016 and signed a two-year contract with “Satun United,” but he was forced to quit “Satun United” after the first season due to internal problems. He returned and joined Thimpu F.C., and by the end of the Bhutan National League, he had scored 15 goals in the 10 league games he had participated in, making him the league’s leading goal scorer.

After spending one season with the “Bhutan National League” squad “F.C. Tertons,” he switched to the “Bangladesh Premier League” outfit “Chittagong Abahani.” A different “Bangladesh Premier League” team, “Uttar Baridhara F.C.,” made him an offer. Chencho chose Chittagong despite the lower pay offer. He received a $4,000 monthly salary for the first three months of his contract, making him Bhutan’s highest-paid athlete.

In the seven league games that Chencho appeared in before his three-month contract was canceled and he returned to Bhutan, he scored 5 goals. He joined Thimpu City in January 2017 for the 2017 “AFC Cup” qualification round. The first Bhutanese team to advance this far in the competition was “Thimpu City,” who won the group stage.
Chencho had a very productive scoring streak in the 2017 Thimpu League season, finishing with 22 goals in 14 games. Thimpu City went on to claim league supremacy and finished second in the 2017 “Bhutanese League” standings.

Midway through 2017, “Minerva Punjab F.C.” contacted Chencho, and the announcement was made in August of that same year. He made his new team’s debut against “Rail Coach Factory FC” in late October, and a few days later, he scored three goals against “Bengaluru FC.” He has developed into one of the team’s major players over time and is incredibly well-liked throughout India.

From U12 to U19, Chencho has participated in practically every team for his country of Bhutan. He scored in his senior debut against Nepal in March 2012, and in March 2015, against Sri Lanka, Bhutan won its first match in the World Cup Qualifiers. His team’s advancement to the second round of the qualifying matches was a significant turning point in Bhutanese football history.

Despite being a devoted fan of Ronaldo, Chencho Gyeltshen was mainly unaware of how much his playing style mirrored that of the Portuguese legend. He never misses a game in which Ronaldo participates. He also admires football greats like Neymar and Lionel Messi.

One of the wealthiest and most well-liked football players is Chencho Gyeltshen. Our analysis of Chencho Gyeltshen’s net worth from sources like Wikipedia, Forbes, and Business Insider indicates that it is roughly $1.5 million.