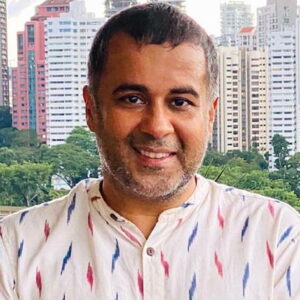 Chetan Bhagat is a former banker, motivational speaker, and TV personality from India. He is largely recognized as India’s most well-known English-language author. He was born and reared in New Delhi and attended the Indian Institute of Technology (IIT) and then the Indian Institute of Management (IIM), two of India’s most famous educational institutions. He came to Hong Kong after receiving his MBA from ‘IIM,’ where he worked as an investment banker for organizations such as ‘Goldman Sachs’ and ‘Deutsche Bank.’ In his younger years, he was inspired to become a writer and began writing his first novel while working in Hong Kong. ‘Five Point Someone,’ the novel, was a huge critical and economic success. He went on to create other novels after that, including ‘One Night @ the Call Center’ and ‘The Three Mistakes of My Life.’ Many popular films based on his works have been filmed, including “2 States,” “Half Girlfriend,” and “Five Point Someone.” He’s also written a few film screenplays and served as a celebrity dancing reality show judge on television. He is one of the few Indian authors to have achieved pop culture celebrity status.

Chetan Prakash Bhagat was born on April 22, 1974, in New Delhi, India, to a Punjabi Hindu family from the upper middle class. He grew up in the West Delhi neighborhood of Naraina Vihar. His father served in the Indian army, and his mother worked for the government. He attended Delhi public schools.

Chetan Bhagat later enrolled at Dhaula Kuan’s ‘Army Public School.’ As a child, he had a fantastic sense of humour and a passion for mathematics. He thrived in school and consistently received great grades. He was also a dedicated English literature student who began writing during his senior year of high school.

When he was in fifth grade, he discovered his passion for writing. His school had launched its own literary magazine, and Chetan was one of the pupils who was urged to contribute to it. Chetan contributed a joke to the publication. When the joke was published, he was ecstatic to see his name in print in a magazine. As a result, he continued to write in the following years.
Following his graduation from the ‘Army Public School,’ he enrolled at the ‘Indian Institute of Technology’ (IIT) in Delhi, one of India’s most prestigious educational institutions. He majored in mechanical engineering and received his BTech in 1995.
He went on to the ‘Indian Institute of Management’ (IIM) in Ahmedabad after graduation, where he earned an MBA. He’d started writing again by then. However, as he came from a middle-class household, becoming a full-time writer remained a fantasy. He was quickly hired out of ‘IIM-A’ and relocated to Hong Kong.

A career in banking

He was hired by ‘Peregrine Investments Holdings,’ which was one of Asia’s largest investment banks, after graduating in 1997. With his family, he relocated to Hong Kong. He was employed at ‘Peregrine’ for six months until the bank closed its doors.
He returned to Hong Kong and was hired by ‘Goldman Sachs,’ one of the world’s largest investment firms, in 1998. He did not, however, enjoy his work there. The majority of his dislike for his job stemmed from his burgeoning interest in writing and his dislike for his boss. He did not, however, resign and continued to work at the bank because he had no other viable options.
He continued to write what became regarded as his first novel when he wasn’t working. He worked on ‘Five Point Someone’ for a long time before he came up with a workable draft. Meanwhile, he worked at ‘Goldman Sachs’ for several years before quitting to pursue a better opportunity.

Chetan Bhagat joined ‘Deutsche Bank’ in the mid-2000s and rose through the ranks to become a vice-president by 2006. He was already a bestselling author in India at the time. Despite this, he wasn’t making enough money to support himself solely via writing. He returned to India in March 2008 after a ten-year stint in Hong Kong. He was generating a lot of money from his novels within a few months. As a result, he chose to leave his investment banking career.

He kept a low profile at work, though, and did not inform any of his coworkers that he had become a moderately successful novelist.

Writing as a profession

While working at ‘Goldman Sachs’ in Hong Kong in the early 2000s, Chetan Bhagat began work on his debut novel, ‘Five Point Someone.’ He wrote during business hours and spent years reworking and polishing the draft. He completed roughly 15 revisions of the novel before submitting it to a number of publishers. However, the majority of them turned him down. Eventually, a publishing business in Old Delhi, ‘Rupa & Co.,’ accepted his book and asked him to make a few changes.

The work was finally released in 2004 and was a huge success right away. It told the story of three engineering students who were having career and personal problems. More than a million copies of the novel have been sold around the world. The story was partially inspired on the 2009 Hindi film ‘3 Idiots,’ which went on to become one of the most successful Hindi films of all time.
Bhagat sat down to write his second novel, titled ‘One Night @ the Call Center,’ after the popularity of his first. It was based on the Indian call center ethos of working the night shift. The novel, which was released in 2005, was a huge hit, selling 50,000 copies in the first three days of its release. It was the fastest-selling book in India at the time.

Chetan Bhagat had grown a lot of confidence about starting a full-time writing career by that point, but he still couldn’t risk quitting his job. ‘The 3 Mistakes of My Life,’ his third novel, was published in 2008 and was a big success, selling a lakh copies in three months. Bhagat became India’s most successful English-language writer when the book became a bestseller. The Hindi film ‘Kai Po Che!’ was based on ‘The 3 Mistakes of My Life,’ and it was a big success.

In 2009, he wrote ‘2 States,’ a semi-autobiographical novel based on his real-life narrative of falling in love with a South Indian woman and the difficulties that ensued. The novel was a critical and economic success, and it was eventually adapted into a film of the same name, which was also a tremendous hit.
All of his subsequent novels, including ‘Revolution 2020,’ ‘Half Girlfriend,’ and ‘One Indian Girl,’ were commercially successful. Many critics, however, noted that he was running out of genuine things to tell and was instead penning more “formulaic” fiction aimed for film adaptations. As a result of this, he was heavily chastised, even by the general public.
Readers’ enthusiasm for him had greatly waned by the time he launched his 2018 novel, ‘The Girl in Room 105.’ The novel, on the other hand, was a huge success.
Chetan Bhagat is dubbed a “celebrity author” since he is constantly in the spotlight. He is a frequent user of social media and is vocal about his social and political opinions. He’s also been chastised for his political stances on numerous occasions.

Chetan Bhagat was a celebrity judge on the dance reality show ‘Nach Baliye,’ a career decision criticized by his detractors because he had neither experience with or comprehension of dancing.

He’s also collaborated on a number of Hindi cinema screenplays based on his novels, including ‘Hello’ and ‘Kai Po Che!’

Chetan Bhagat’s works frequently address father–son conflicts, as evidenced by the film ‘2 States,’ which was inspired by his own experiences. However, he once said that recurrently adopting this issue in his writings had helped him repair his relationship with his father.

While at ‘IIM,’ Chetan Bhagat met Anusha Suryanarayanan. In 1998, the couple married after falling in love. Ishaan and Shyam Bhagat, twin boys, are the couple’s children. His real-life love story was the inspiration for the film ‘2 States.’

Chetan Bhagat is estimated to be $ 28 Million.