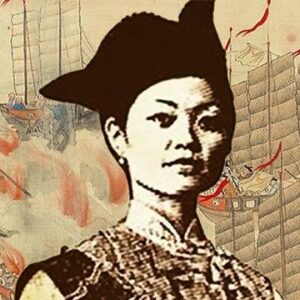 During the height of her piracy career, Ching Shih was a famed and powerful female pirate lord known as the ‘Terror of South China.’ In her hometown of Guangzhou, Guangdong province in South China, she rose to prominence as a teenage prostitute with acute intelligence and commercial acumen. She attracted the attention of infamous pirate Cheng I (Zheng Yi), whom she married in exchange for control of half of his pirate ship and enterprise. She was defeated by the Portuguese Navy several times before being pardoned by the Qing imperial government and permitted to keep the wealth obtained from piracy in order to retire in peace.

She was born in the Qing era in the Chinese province of Guangdong in 1775. Shi Yang was her given name when she was born. According to some sources, her birth name is Shil Xiang Gu or Shil Gang Xu.
In the Chinese city of Canton (Guangzhou), she worked as a prostitute in a floating brothel. Shi Xianggu was her prostitution moniker. She became well-known in the region for her wits, financial savvy, susceptibility to intrigues, and ability to trade private information.
She married infamous pirate lord Cheng I (also known as Zheng Yi) in 1801, when she was twenty-six years old, and he belonged to a powerful pirate family that had been in the business of piracy for many generations. Zheng Yi is reported to have fallen in love with Ching Shih’s beauty and proposed to her for marriage as a result. According to some stories, Zheng Yi was impressed by Ching Shih’s intelligence and economic acumen and desired to marry her in order to have a partner to help him run his huge piracy enterprise.
She accepted to marry Zheng Yi on the condition that she would have half ownership and control of her husband’s piracy enterprise. Zheng Yi owned roughly 200 pirate ships at the time of their marriage and was one of the region’s most powerful pirates.
Other pirate lords of the Guangdong province forged an alliance with Zheng Yi due to his tact and military prowess, and by 1804 they had grown into a strong pirate army. The ‘Red Flag Fleet’ was the name given to Zheng Yi’s pirate fleet. Zheng Yi died in Vietnam on November 16, 1807, at the age of 39 years (according to some accounts he was aged forty-two at the time of his death).

Following her husband’s death, Ching Shih quickly established herself as the unquestioned leader of her husband’s pirate force. She made a connection with her husband’s stepson, Cheung Po Tsai, with whom she rapidly became close.
She then sought the help of her late husband’s family’s most powerful members. Her husband’s strong nephews, Ching Pao-yang and Ching Ch’i, became her supporters, assisting her in winning her husband’s family’s complete loyalty.
She then went about gaining the support of the pirate alliance founded by her late husband. She won the confidence of the fleet captains who were most faithful to her husband, as well as expanding her influence over other captains.
She appointed Cheung Po Tsai, her boyfriend and late husband’s second-in-command, as the official captain of the Red Flag Fleet. Despite the fact that he was the official captain, Cheung Po Tsai remained faithful to her, and the Red Flag Fleet was in her hands.
She began her piracy career as the captain of the world’s largest pirate fleet. Her fleet had around eighteen hundred ships of various sizes and a crew of almost eighty thousand soldiers.
Ching Shih established a stringent code of regulations for her soldiers as leader of the Red Flag Fleet in order to keep the fleet united and disciplined. The rules were rigorously followed.
Anyone who gave orders opposite to those given by a superior or disobeyed orders given by a superior was immediately killed. All members of the Red Flag Fleet were given access to the plunder through a joint collective fund. The treasure was put up for group inspection after a piracy expedition. The purser then registered and accounted for it before the fleet captain disbursed it. The ship that brought a specific quantity of booty was paid 20% of the total, with the remaining 80% going to the common fund.
Anyone who refused to hand over booty for the first time was beaten and then killed. Even first-time offenders could be decapitated if a sufficient sum is withheld. Deserters’ ears were hacked off. The pirate fleet was forbidden from stealing from the common treasury or robbing the villages that supplied the fleet. If ladies were apprehended during a raid, the unattractive ones were released unharmed while the attractive ones were ransomed. If a lady was raped, the pirate was beheaded, and if there was consenting sexual contact, the woman was tossed overboard with cannon balls tied to her legs. Any pirate who wanted to marry a captive woman might do so on the condition that he would be faithful to her for the rest of his life.
The Red Flag Fleet, under the command of Ching Shih, acquired dominance over the South China Sea in a short amount of time. Her hegemony was established in several coastal districts of South China, and she imposed levies and taxes in a number of locations. She raided several cities and villages in order to loot them, and her fleet is said to have murdered over eighty men and sold their wives and children into slavery in one village called Sanshan.
The Chinese Qing dynasty conducted a naval expedition against the Red Flag Fleet in 1808, but it was defeated. After this voyage, the Qing imperial government was said to have just boats left for naval usage after all of their ships were taken by her.
The Portuguese navy flotilla stationed on the island of Macau defeated the Red Flag Fleet many times between September 1809 and January 1810. The ‘Battle of the Tiger’s Mouth’ is the name given to a series of engagements in Chinese history. This depleted the fleet’s strength, making it hard for Ching Shih to continue piracy.
In the same year, following her defeat in the Battle of the Tiger’s Mouth, she accepted an amnesty offer from the Qing imperial government, allowing her and Cheung Po Tsai to surrender and keep their piracy profits. Her pirate army was likewise pardoned, and the majority of them only had to hand over their weapons in exchange for their freedom.
Ching Shih and Cheung Po Tsai petitioned Guangdong Governor Zhang Bailing to divorce their mother-son connection and allow them to marry. They were permitted to marry, and Governor Bailing himself was present at the wedding.
In 1813, she gave birth to a boy and a daughter with Cheung Po Tsai. When Cheung Po Tsai died in 1822, she returned to Guangzhou and established a gambling house and a brothel. In 1844, at the age of sixty-nine, she died in bed surrounded by her family.

Ching Shih was a powerful woman at a time when female leaders were uncommon. Given the different societal and religious constraints on women, it was difficult for a woman to reach to the top in Asia’s criminal underworld. As a result, Ching Shih can be considered a pioneer of her time, albeit in a bad sense, as an outlaw and cruel pirate queen who had no qualms about torturing and murdering to attain her goals.

Ching Shih translates to “widow of Cheng.” Her descendants are said to still be active in the casino industry in and around Macau. She is the inspiration for the character ‘Mistress Ching,’ one of the nine pirate lords in Disney’s ‘Pirates of the Caribbean’ franchise.