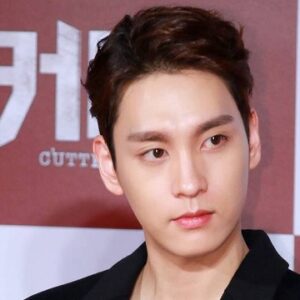 Choi Tae-joon is a South Korean actor who has been in shows such as ‘Padam Padam… The Sound of His and Her Heartbeats,’ ‘Mother’s Garden,’ and ‘Adolescence Medley,’ as well as hosting the reality show ‘Hello Counselor.’ As a kid performer, he debuted in the South Korean television series ‘Piano,’ which aired on SBS. Following that, he left appearing as a kid artist after another series, ‘Magic Kid Masuri,’ and a film, ‘Project X.’ Choi returned to popular acting as a teenager after a few years away, playing Im Jung, the estranged son of the protagonist of the South Korean television series ‘Padam Padam… The Sound of His and Her Heartbeats.’ After then, he played a variety of parts in series such as ‘The Great Seer,’ ‘Adolescence Medley,’ ‘Mother’s Garden,’ and ‘The Girl Who Sees Smells.’ So far in his second innings, he has appeared in two films: ‘Pacemaker’ and ‘Eclipse.’ He’s also appeared on a number of TV variety series, including ‘Radio Star’ and ‘Hello Counselor,’ the latter of which he was the permanent presenter for episodes 288 to 341.

He was born in Seoul, South Korea, on July 7, 1991. The early education and family of this young genius who dabbled in acting as a kid artist are unknown.Later, when co-hosting the variety show “Hello Counselor,” he reflected on his own troubles as a child actress in one of the show’s episodes, sympathizing with a 12-year-old guest who was pressured by her father to take acting lessons. “I didn’t want to act,” Choi explained, “but my mother would reward me and force me to act.” But by the time I was in middle school, I wasn’t fond of it.”

“If someone would strike up a discussion with me by asking, ‘Aren’t you Magic Kid [part he portrayed on a television show]?” he said in that episode. I’d start fighting them.” Such situations stressed him out, and it began to influence his social and personal life. As time passed, his parents supported his wishes and allowed him to stop acting as a kid artist.He received his education at the ‘Chung-Ang University,’ where he majored in Theater.

He made his acting debut as a child artist when he was just 10 years old in the South Korean TV series ‘Piano.’ From November 21, 2001 until January 10, 2002, he starred in the melodrama Young Lee Kyung-ho, which aired on SBS for 16 episodes and had great ratings.In 2002, he played Min Ho-soo in the South Korean television series ‘Magic Kid Masuri’ on the KBS2 network.His final role as a kid actor was in the 2003 film ‘Project X.’Choi returned to the world of glamour and entertainment as an attractive and charming young man after a seven-year hiatus.

When he earned the role of Im Jung in the South Korean romance fantasy TV series ‘Padam Padam… The Sound of His and Her Heartbeats,’ his second innings in the field also began on television. From December 5, 2011 through February 7, 2012, it ran for 20 episodes on the newly created cable channel jTBC.He later played Min Yoon-ki in the South Korean sports drama film ‘Pacemaker,’ which was released on January 18, 2012 and garnered US$2.96 million at the box office. He also appeared in two SBS television series that year, as Yi Bang-won in ‘The Great Seer’ and as Oh In-sung (cameo) in ‘The King of Dramas.’

He had an appearance in the music video for the song ‘Bye Bye Happy Days!’ by the South Korean pop girl group ‘Kara’, which was released on March 27, 2013.Gong Hyun-seok was his first starring role in the South Korean daily drama ‘Ugly Alert,’ which aired on SBS for 133 episodes from May 20, 2013 to November 29, 2013.Following that, Lee Yeok-ho starred in another teen miniseries, ‘Adolescence Medley,’ a South Korean coming-of-age romantic comedy. The miniseries aired on KBS2 for four episodes from July 10, 2013 to July 31, 2013, and was adapted from a webtoon by Kwak In-geun with the same title.

His portrayal in the South Korean daily TV romance family drama ‘Mother’s Garden’ as Cha Ki-joon, a second-generation chaebol who secretly desires to be a chef, is regarded one of his most remarkable performances to date. His outstanding performance in the 126-episode series, which aired on MBC from March 17 to September 18, 2014, garnered him the Best New Actor award at the MBC Drama Awards that year.

He also appeared as a guest on the MBC network’s South Korean chat show ‘Radio Star’ in 2014.In the South Korean romantic suspense fantasy TV series ‘The Girl Who Sees Smells,’ he played Ye Sang-gil, a minor character. From April 1, 2015 to May 21, 2015, it aired on SBS for 16 episodes.He was nominated for Best New Actor and Best Couple Award (with Jo Bo-ah) at the 2015 KBS Drama Awards for his next supporting role as Lee Hyung-soon in the South Korean dramatic family TV series ‘All About My Mom.’ From August 15, 2015, until February 14, 2016, 54 episodes of this weekend series aired on KBS2.

He also appeared in the SBS variety show ‘Running Man’ in 2015.He later starred as Se-joon in the film ‘Eclipse,’ which was released on March 30, 2016.In the South Korean historical romantic and action TV series ‘The Flower in Prison,’ he played Sung Ji-heon, one of the main cast members. The 51-episode series, which aired on MBS to commemorate the network’s 55th anniversary, aired on weekends from April 30, 2016 to November 6, 2016.

‘Happy Together,’ ‘Celebrity Bromance,’ ‘Tasty Road,’ ‘We Got Married,’ and ‘Hello Counselor’ were among the TV variety shows he featured in in 2016. From August 29, 2016 to September 4, 2017, he was the permanent host of a variety talk program where he had previously appeared as a guest on episodes 286 and 287. In 2016, he won the Rookie Award in Talk Show at the KBS Entertainment Awards for the show.He starred as KDI-109 in the South Korean web series ‘109 Strange Things,’ which aired on the ‘Naver’ web portal in 2017.

He played Choi Tae-ho in the South Korean television series ‘Missing Nine,’ which aired on MBC from January 18 to March 9, 2017.His most recent television appearance was in the South Korean legal-crime romantic-comedy drama ‘Suspicious Partner,’ in which he was one of Ji Eun-key hyuk’s cast members. From May 10, 2017 through July 13, 2017, it broadcast on SBS for 40 episodes.In July 2017, he also signed with ‘Huayi Brothers,’ a South Korean talent management and TV production firm.

Choi Tae-joon is one of the wealthiest TV actors and one of the most popular. Choi Tae-net joon’s worth is estimated to be $1.5 million, according to Wikipedia, Forbes, and Business Insider.In 2001, he made his acting debut on the series Piano.

Choi rose to prominence for his roles as the protagonist’s estranged son in the fantasy drama Padam Padam (2011), a 20-year-old high school bully in the webtoon adaptation Adolescence Medley (2013), a villain in the disaster drama Missing 9 (2017), and a lawyer in the romance comedy drama Suspicious Partner (2017). Choi also played the lead in the 2016 youth film Eclipse.

Choi starred alongside Apink’s Yoon Bo-mi in the virtual reality show We Got Married in 2016. Choi joined the Korean variety show Hello Counselor as a permanent host in September after appearing as a guest for two weeks in a row in August 2016.