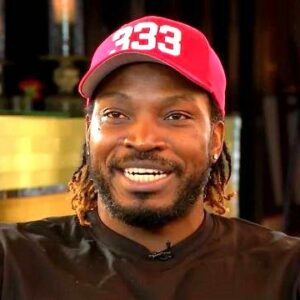 Chris Gayle is a Jamaican cricketer who currently represents the West Indies in international cricket. He was born and bred in Kingston, Jamaica, and is regarded as one of the game’s most powerful ball-hitters in modern limited-over styles. He has a number of records in both T20 and One-Day International cricket (ODIs). Several experts consider him to be the greatest T20 player of all time. Due to his erratic and tenacious style of play, he is often deemed suitable for limited-over games. He does, however, possess some Test cricket records. He is the only player in the world to strike a six off the first ball of a Test match, which he did in 2012. He is one of only four players in Test cricket history to make two triple centuries, and he is also one of the few players to score a double-century in a one-day match. He is also a member of the ‘Kings XI Punjab’ side in the ‘Indian Premier League.’ He also represents a number of other domestic teams in nations such as Pakistan and Australia.

Chris Gayle was born Christopher Henry Gayle on September 21, 1979, in Kingston, Jamaica, to a lower middle-class family. He was the fifth of the family’s six children. His parents struggled financially while they raised their children. His father, Dudley Gayle, was a police officer, and his mother sold peanuts to supplement the family’s income.
Chris’ grandpa was a well-known cricketer, despite his parents’ lack of cricket experience. He used to play club cricket when he was younger. Chris became increasingly interested in the game as a result of this.
Chris worked as a rag-picker for a period amid his family’s financial difficulty, despite growing up in a large family and facing hardship. He has also acknowledged to stealing for a period of time in order to support his family.
He didn’t do well in school and devoted all of his time to cricket. He graduated from Jamaica’s ‘Excelsior High School’ and joined the ‘Lucas Cricket Club,’ a local Jamaican cricket club.
Chris claims that his early years with ‘Lucas’ were the most formative of his life, and that those years also helped him properly grasp the game. By playing in local contests, he gradually gained the notice of the selectors. He debuted for the West Indian youth international squad in 1998.

Chris Gayle made his international debut in 1999, when he was a member of the main West Indian team. His playing style was positively received by the team’s administration. Chris became a national phenomenon in July 2001 when he scored 175 runs against Zimbabwe. He also set the record for the longest opening partnership, which lasted 214 runs, with Daren Ganga.
Despite this outstanding performance, Chris was not regarded a regular member of the national squad because the century came against a weak Zimbabwean team.
Then came 2002, when he made the most of his opportunity to play for the national squad. He became only the third West Indian cricketer to achieve 1000 runs in a calendar year by the end of the year, when he hit three centuries in a series against India. As a result, he joined the ranks of legends such as Brian Lara and Sir Vivian Richards.
He was recognized as a hard-hitting pitcher back then. In a Test match, though, that was not the best way to play. As a result, he was in and out of the national Test team on a regular basis. When he became the first player to make a Test triple-century against South Africa in 2005, he silenced all of his doubters. Sri Lankan batsman Mahela Jayawardene later broke the record.
Around that time, Chris began to experience dizziness and weakness on the field, forcing him to abandon the game several times in the middle. He was diagnosed with a congenital cardiac problem after being taken to the hospital. Chris underwent cardiac surgery to address the underlying cause of the condition.
In the 2006 ‘Champions Trophy’ event, he did exceptionally well. Chris was voted “Player of the Tournament” despite his side losing in the finals versus Australia. He received the accolade after scoring 474 runs and taking eight wickets in the competition. However, his performance at the following year’s ‘World Cup’ was below average.
Chris set the inaugural record for being the highest-scoring player in the 2007 ‘World Twenty20,’ with 117 runs against South Africa. He also made history by becoming the first international cricketer to hit hundreds in all three forms.
Chris’ reputation as a hard-hitter makes him one of the top candidates for the 2008 ‘Indian Premier League.’ In April 2008, the auctions were held, and Chris was purchased by the ‘Kolkata Knight Riders,’ a team owned by Bollywood celebrity Shah Rukh Khan. Due to a current series versus Sri Lanka, Chris missed the opening four games of the event.
Chris became the fifth-fastest century-scorer in a Test match in December 2009, during a match against Australia. To get to 100 runs, he needed 70 balls. In November 2010, he set a new record by becoming the fourth player in Test cricket history to achieve two triple-centuries, joining Donald Bradman, Brian Lara, and Virender Sehwag. Chris became the first cricketer to knock a six off the first ball in a Test match against Bangladesh in November 2012. He became the fourth player in the world to reach a double-hundred in an ODI in February 2015.
Chris’ specialization is in the game’s limited-formats. He has played 50 international T20 matches so far, scoring 1519 runs at a 35.33 run average. In 96 matches, he has 3563 ‘IPL’ runs at an average of 42.93 runs per match. He has six ‘IPL’ centuries to his credit, making him one of the players with the most centuries in the competition.
He has also made an impact in the longer versions of the game, having appeared in 284 One-Day Internationals for the West Indies and scoring 9727 runs at an average of 37.11. He has scored 7214 runs in 103 Test matches, an average of 42.18 runs per inning.

Chris Gayle has been married to Natasha Berridge for a long time. Chris and Krisallyna had a daughter named Krisallyna, but Chris has no desire to marry. Chris announced the birth of his daughter in April 2016 on ‘Instagram.’
‘Six Machine: I Don’t Like Cricket… I Love It,’ is the title of Chris’ autobiography.
He is a die-hard football enthusiast who cheers on ‘Real Madrid.’ Cristiano Ronaldo is his favorite footballer.

Despite his often calm and upbeat demeanor on the field, he has been the subject of numerous scandals. He remarked in 2009 that he would not mind if Test cricket was fully phased out and replaced by the T20 format. His statement drew a lot of criticism.
Chris had a conflict with the West Indies team management in April 2011 and did not play for his national team for the rest of the year.
During an interview with Mel McLaughlin for the ‘Big Bash League’ in January 2016, he was once again drawn into controversy. Chris asked if they could “have a drink after,” and subsequently added, “Don’t blush, baby,” a nasty and misogynistic insult. This caused a big commotion, and he was fined heavily as a result. Later, he apologized and explained that he meant it as a joke.