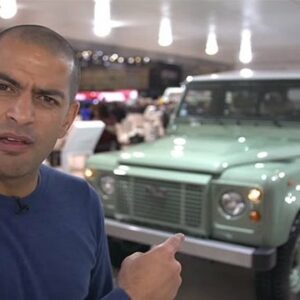 Chris Harris is a well-known automotive journalist, television broadcaster, and racing driver from the United Kingdom. He’s written, edited, and reviewed for a number of high-end publications, including ‘Autocar,’ ‘Evo,’ and ‘Jalopnik,’ to mention a few. He has also served as a presenter for a number of television series. That’s not all! Chris Harris has a YouTube channel called ‘Chris Harris on Cars,’ where he delivers useful content on the subject. Harris is currently one of the three main presenters on the BBC show ‘Top Gear.’ Harris began his career in the automotive sector as a menial laborer and worked hard with a steely ambition to make it big and achieve the level of accomplishment that he presently enjoys. The British celebrity has amassed a large following around the world. Chris Harris currently has 172k Twitter followers and roughly 258k Instagram followers. On his YouTube account, he currently has over 385k subscribers.

Chris Harris began his career in the automobile business, where he worked for the magazine ‘Autocar,’ performing menial labor chores such as cleaning ashtrays. He was elevated to a road-test editor and assigned the responsibility of producing car evaluations and frequent opinion sections after working regularly there. In 2008, Harris quit ‘Autocar’ magazine and co-founded ‘Drivers Republic,’ a web-based digital platform. Unfortunately, the platform was shut down a year later, and Harris went to work as a reviewer/writer for the ‘Evo’ magazine.

On October 12, 2009, he published his debut piece. Then he teamed up with ‘/DRIVE,’ a popular YouTube station and automotive network, to develop an opinion and review series. This weekly series, dubbed ‘Chris Harris on Cars,’ consisted of 104 episodes that accumulated over 3.5 million views in just two years. Following that, Harris departed the network in 2014 and started his own YouTube channel called ‘Chris Harris on Cars.’ His channel now has about 385 thousand subscribers and approximately 30 million views. Apart from running his channel, Harris now appears on the American television network NBCSN, where he assesses vehicles and participates in automotive-related events.

Chris Harris is a gifted race car driver. In a Formula Palmer Audi, he won his maiden race in the year 2000. On occasion, he also uploads race-related videos to his YouTube channel.

A Career in Television

Chris Harris joined the cast of the TV show ‘Top Gear’ in 2016. He began as a recurring presenter, but after Chris Evans’ departure from the show, he was moved to lead presenter. Harris’ web series, ‘Chris Harris on Cars,’ premiered on the channel ‘BBC America’ the same year.

Chris Harris was barred from assessing Ferrari cars in 2011 after writing an article titled “How Ferrari Spins.” In this essay, he slammed the brand, calling it “profoundly unpleasant.” The prohibition was later removed in 2013, and Harris has since examined other Ferrari automobiles. Because of his piece ‘Lamborghinis Are The Perfect Cars For People Who Can’t Drive,’ the racing driver was barred from rating Lamborghini cars the following year. As a result, Lamborghini terminated their partnership with Harris, who hasn’t officially reviewed a Lamborghini vehicle since.

Chris Harris was born in the United Kingdom on January 20, 1975. He was born and raised in Bristol. His mother was an autocross racer and his father was an accountant. Harris, his wife, and their three children currently reside in Monmouthshire. Aside from that, the media has no access to any information about his personal life.

Regarding the reports of numerous sources and sites, Chris Harris possesses large wealth. According to Hot Cars, he earns between $500,000 and $1 million as a Top Gear host. According to Statsmash.com, his estimated net worth is $29,000.