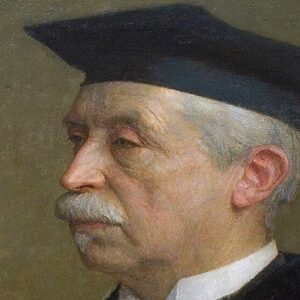 Christiaan Eijkman was a Dutch physician and physiologist who discovered antineuritic vitamins. He wanted to be a doctor but his family couldn’t afford the 6,000 euros required for medical school. So he pledged to join the military, allowing him to study medicine for free. Soon after, he was assigned as an Army Surgeon to Indonesia. Here he first encountered cases of beriberi and was puzzled. He became a bacteriologist and spent several years researching the disease in Java. He discovered a component in unpolished rice that might both prevent and cure beriberi, but it was gone when the rice was polished. He had to return home soon after, but his discovery prompted more research, leading to the discovery of antineuritic vitamins (Thiamine). A year before his death, he received the Nobel Prize for his discoveries.

Christiaan, the seventh of eight children, had talented brothers. It was one of them who isolated shikimic acid from the Japanese flower shikimi. One brother was a linguist, while another was a pioneering Dutch roentgenologist.
His father became the headmaster of an advanced elementary school in Zaandam, North Holland, in 1859. Christiaan began his education here.

In 1875, he graduated from high school under his father’s direction. His dream was to become a doctor, but the family’s finances prevented him.

So he enrolled in the Army Medical School at the University of Amsterdam, promising to join the military after finishing the course. So he could study medicine for free. He was a brilliant student who aced his medical exams.
From 1879 to 1881, he worked with Professor Thomas Place at the University of Amsterdam. During this time, he began writing his doctoral thesis.

On 13 July 1883, he received his MD degree for his dissertation ‘Over Polarisatie in de Zenuwen’. Then he joined the Netherlands Indies Army.

In 1883, Christiaan Eijkman was assigned as an army surgeon to Java, then known as Dutch East Indies. He was posted to Semarang and then Tjilatjap.

But he got malaria before he could do anything. In November 1885, he was sent back to the Netherlands on sick leave, where he decided to study bacteriology, a new science at the time.

He began with Josef Förster in Amsterdam. He afterwards proceeded to Berlin to work with Robert Koch, who had identified both the bacterium that causes tuberculosis and the technology for producing it and infecting animals with it.

It was innovative at the time, because doctors had no idea what caused diseases like TB and malaria. They saw the light after Koch’s discovery.

Meanwhile, the Dutch administration was concerned about the high number of beriberi cases among their troops in the East Indies. They formed a commission to investigate the condition. It included pathologist Cornelis Adrianus Pekelharing and neurologist Cornelis Winkler.

In 1886, Pekelharing and Winkler visited Koch in Berlin to study about bacteriology. Eijkman, who was not totally recovered, volunteered to join the operation. In October, he left with the committee for the East.
Upon arrival in Batavi, the crew set up a makeshift laboratory in the Military Hospital (now Djakarta). Pekelharing soon discovered a micrococcus that caused polyneuritis in the blood of beriberi patients.

But Eijkman was suspicious because it contradicted Koch’s ideas. He also tried infecting birds, rabbits, dogs, and monkeys with the cultivated micrococcus, but failed.

In 1887, Pekelharing and Winkler were called back to the Netherlands, but not before proposing that the laboratory they had established up be made permanent. Its first Director, Eijkman, stayed on.
Elected as Director of the Javanese Medical School, Eijkman taught physiology and organic chemistry. With that, his military service ended and he could focus on his study.

Christiaan Eijkman was appointed Director of the Geneeskundig Laboratorium on January 15, 1888, and served until March 4, 1896. He made key findings here.

Initially, he failed to infect rabbits and monkeys with microbes. So beriberi takes a long time to develop. At the same time, the sickness could not be delayed.

So he started seeking for cheap animals that would swiftly develop the sickness. Then he bought a lot of chickens and put them in cages under the lab’s enlarged roof. He infected some of them while retaining others as controls.
Soon after, the chickens grew sick. He then autopsied and histologically examined them, meticulously recording their symptoms and disease development. Polyneuritis gallinarum is an illness similar to beriberi or polyneuritis endemica perniciosa.

He concluded that the injected hens had infected the others, causing the outbreak. To be safe, he bought more chickens and put them in separate cages, but these got sick too.

Assuming the entire lab was infested, he opted to keep new hens separate. But as he did so, all the sick chickens became better without him giving them any medicine or doing anything to cure them. He was perplexed.
The answer came from an unexpected source: the man who fed the hens. During the outbreak, he fed them leftover hospital rice. But when it ran out, he fed them with market rice.

Further research revealed that the epidemic rice was polished, but the market rice was not. After considerable trial and error, he discovered that unpolished rice has nutrients that polished rice lacks.
“The anti-beriberi factor” he dubbed it. He had no idea what it was and assumed it was a toxin in the rice grain that was neutralized by something in the hull.

Further study revealed that the condition is caused by bacteria. He ruled out blood contamination, respiration, perspiration, and temperature change.

In 1895, he asked A. G. Vorderman, the supervisor of the Java Civil Health Department, to conduct human trials. As a result of his work, numerous cases of beriberi were cured.

He also worked on fermentation and produced two textbooks for Medical College students. In 1896, he was unwell and had to return to the Netherlands. His friend Adolphe Vorderman agreed to continue the research before he left.

Returning home, Christiaan Eijkman began teaching at the University of Utrecht. He became Professor of Hygiene and Forensic Medicine at Utrecht in 1898, a position he held until 1928. During this time, he focused on bacteriology, supervising various research projects in his lab.

The fermentation test was one of the most important research efforts during this time period. Later he studied bacterial mortality and growth in solids.

He was a popular teacher noted for his practical expertise and clarity of communication. He urged his students to think for themselves and reject dogmas.

A member of the Gezondheidscommissie, he also actively participated in anti-alcohol initiatives. He founded the Vereeniging to Bestrijding van de Tuberculose to fight tuberculosis (Society for the struggle against tuberculosis).

Christiaan Eijkman is well known for his work on beriberi, which showed for the first time that unpolished rice might both prevent and cure the condition.

His first discoveries in this sector led to a series of research that ended in the identification of thiamin – vitamin B1 in the pericarp of unpolished rice grains as a beriberi preventative agent.

He joined the Royal Netherlands Academy of Arts and Sciences in 1907. And he was an honorary fellow of the Royal Sanitary Institute in London.

In 1929, Christiaan Eijkman shared the Nobel Prize in Physiology or Medicine with his co-discoverer. Sir Frederick Hopkins shared the medal “for his discovery of the growth-stimulating vitamins.”
He was also knighted by the Dutch government.

In 1883, Eijkman married Aaltje Wigeri van Edema. She died in 1886. The couple had no children.
1888 – Bertha Julie Louise van der Kemp Pieter Hendrik was born in 1890. He grew up to be a doctor.
After retiring in 1928, Eijkman fell unwell and by 1929, he was too sick to travel to Norway to accept the Nobel Prize in person. He died in Utrecht on November 5, 1930, after a long illness.

The Eijkman Medal, established to commemorate his 25th year as a professor, continues his legacy.
The Indonesian government renamed his former research site in Jakarta the Eijkman Institute for Molecular Biology.

Christiaan is one of the richest Doctor & listed on most popular Doctor. According to our analysis, Wikipedia, Forbes & Business Insider, Christiaan Eijkman net worth is approximately $1.5 Million.

The Nobel Committee credited Eijkman with discovering the antineuritic vitamin, but it was the Polish researcher Casimir Funk who found thiamine and developed the vitamin concept in 1912. His contribution was never properly acknowledged.