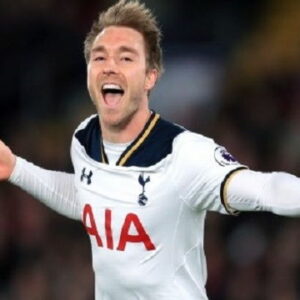 Christian Dannemann Eriksen is a professional footballer from Denmark who plays as an offensive midfielder for Tottenham Hotspur and the Denmark National Team. He began playing football at the age of three, when he was born in Middlefart, Denmark. He began playing for the Odense Boldklub, a Danish professional football team, when he was thirteen years old. He performed admirably, and his coaches believed he had a great career ahead of him. Later, he signed a contract with Ajax valued roughly a million Euros. He also joined the Danish Under-17 football squad when he was 15 years old. He was soon voted the Danish Football Association’s ‘Danish Talent of the Year.’ He was able to play for the Danish national team in the 2010 FIFA World Cup due to his exceptional performances. He came in as the tournament’s youngest participant. His team, on the other hand, did not do well. He has won various prestigious trophies and medals throughout his career, including the ‘Danish Football Player of the Year’ award three times.

Christian Erikson was born in Middlefart, Denmark, on February 14, 1992. He began playing football when he was just three years old.
He joined the Odense Boldklub when he was thirteen years old, and soon after began competing in Danish youth championships. In his first season, he did pretty well, despite his squad was defeated in the semifinals. He was dubbed the ‘Best Technical Player’ at the end of the competition.
Due to his outstanding performances, he piqued the curiosity of numerous European football clubs. He eventually decided to accept a contract with Ajax, an Amsterdam-based team, worth roughly a million Euros.

Christian Eriksen scored his first goal for Ajax against Go Ahead Eagles on March 25, 2010. He appeared in 21 games during his rookie season with the team. Despite the fact that he only scored one goal, his whole performance was praised, and he was chosen to make his international debut the following year.
His play in the 2010-11 season was equally outstanding. He was named the Danish ‘Talent of the Year’ in December. He continued to demonstrate his worth by scoring goals in a number of victories. That year, he won several awards, including Ajax’s ‘Talent of the Year’ and ‘Dutch Football Talent of the Year,’ becoming only the second Danish player to do so. Throughout the season, he delivered numerous assists, and his contribution to the club was greatly appreciated.
After appearing in 113 league matches for Ajax and scoring 25 goals, he eventually left the club. After that, he joined the English team Tottenham Hotspur. In September 2013, he made his league debut in a match against Norwich City, which concluded in a 2-0 win for his club. He continued to contribute to the team’s success, scoring many goals. During the entire season, he scored ten goals and was named Danish Player of the Year.
He was voted Danish Footballer of the Year for the third time in 2016, as he continued his great career. He became the first player to win the award three times in a row. During the 2016-17 season, he has eight goals and fifteen assists. His club finished the league season as runners-up to the champions, Chelsea. He proceeded to score for his side the next season, eventually winning the ‘Tottenham Player of the Year’ Award for the second time.

Christian Eriksen first represented Denmark at an international level in July 2007, when he was a member of the national Under-17 squad. The Danish Football Association named him ‘Danish U-17 Talent of the Year’ the following year. He was a member of the team until February 2009. In 2009, he also played for the U-18 and U-19 teams.
In a friendly match against Austria in 2010, he made his debut for the Danish National Team. He was also chosen to represent his country at the 2010 FIFA World Cup, which will be held in South Africa. He was the tournament’s youngest player. He only appeared in two games, and his club did not fare well. In the group stage, they were eliminated.
He played in a friendly match against England in 2011, in which his team lost 2-1. He was chosen Man of the Match, and his performance was appreciated. In June 2011, he scored his first national goal, assisting his country to a 2-0 victory over Iceland, allowing them to qualify for Euro 2012. As a result, he became the youngest Danish player to score in European qualification.
In 2018, he was instrumental in the team’s qualification for the 2018 FIFA World Cup. Age Hareide, the team’s manager, praised his performance, calling him one of the top ten players in the world.

Christian Eriksen has won numerous trophies and medals, including Ajax Talent of the Future (2010), Danish Talent of the Year (2010 and 2011), and Danish Football Player of the Year (2010 and 2011). (2013, 2014, 2015, and 2017). In 2012, he was awarded the Bronze Boot for Dutch Footballer of the Year.
He is the only player in Danish football history to win the Danish Football Player of the Year Award three times in a row.
Christian Eriksen holds the Premier League record for most goals scored by a Danish player. Though Eriksen has kept his personal life private, he announced in late 2017 that he and his girlfriend Sabrina Kvist Jensen are expecting a child.

Christian Eriksen has a net worth of $25 million.