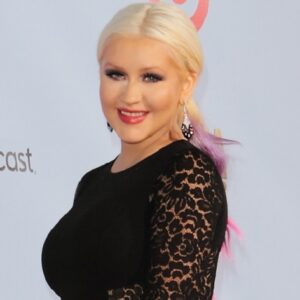 Christina Maria Aguilera is a well-known singer, songwriter, producer, and actress from the United States. She was born in New York to an army officer and a musician. She had a golden voice since she was a young girl and was known as the ‘big voice’ girl in the neighborhood. When she was younger, she participated in the ‘Star Search’ competition and performed in ‘The Mickey Mouse Club.’ Christina Aguilera’s debut studio album, ‘Christina Aguilera,’ was released in 1999 and featured the single ‘Genie in a Bottle.’ She’s recorded seven studio albums since then, including singles like ‘Dirrty,’ ‘Ain’t No Man,’ ‘Beautiful,’ and others. She also collaborated with Lil’Kim, Pink, and others on the ‘Lady Marmalade’ single for the film ‘Moulin Rouge!’ In her musical career, she won two Grammys and was nominated for more than six MTV Video Music Awards. She was in the musical ‘Burlesque,’ which she co-wrote and sung all of the songs for. She has also appeared in one of Martin Scorsese’s documentaries, ‘Shine a Light.’ Jordan Bratman, her record producer, with whom she has a child, was her husband for five years. They’re no longer together.

Christina Aguilera is the daughter of Xavier Aguilera and Shelly Moraine, and was born in Staten Island, New York. Her father was a member of the US army, so they had to move around a lot, and her mother was a musician and pianist. Her parents divorced when she was six years old, and she and her mother relocated to Pennsylvania to live with her maternal grandmother. Her father is claimed to be emotionally and physically abusive to her and her mother.

Aguilera had always aspired to be a singer and was well-known in her hometown for her golden voice. She made her first public appearance in 1990 on the show ‘Star Search,’ but she did not win the competition.
She attended Rochester Area School District and Marshall Middle School in Wexford as a student. She was tormented in both schools because of her singing ability and her appearance on television.
She appeared in ‘The Mickey Mouse Club’ in 1993 among other celebs such as Ryan Gosling, Britney Spears, Justin Timberlake, and others. She was only 14 when she recorded her debut song, a duet with a Japanese singer called “All I Wanna Do.”

Aguilera auditioned for the music of the animated film “Mulan” in 1998. She recorded the song “Reflection,” and RCA Records offered her a recording contract. In 1999, she released her debut album, Christina Aguilera, which included big singles including “Genie in a Bottle” and “What a Girl Want.” The album charted at number one in the United States and around the world. She performed a duet with Enrique Iglesias during Superbowl XXXIV in 2000. In the same year, she won the Grammy Award for Best New Artist. ‘Mi Reflejo,’ her Latin-pop album for which she learned Spanish, was released. It featured Ricky Martin on the hit tune “Nobody Wants to Be Lonely.”
In the year 2000, Christina Aguilera released ‘My Kind of Christmas,’ a Christmas album that went platinum and sold over 3 million copies around the world.

In 2001, Aguilera collaborated on a single named “Lady Marmalade” with Lil’ Kim, Mya, and Pink. The song was written for the film ‘Moulin Rouge!’ and went on to become one of the best-selling singles ever.
‘Stripped,’ her fourth studio album, was released in 2002. The video for its single ‘Dirrty’ was first released by MTV, and it was widely panned due to Aguilera’s overly sexual portrayal. The album was certified multiplatinum and went on to sell 4 million copies worldwide.

‘Back to Basics,’ her fifth studio album, was released in 2006. It went on to sell 4.5 million copies around the world. It was a critically lauded album that included big singles such as “Ain’t No Other Man,” “Fighter,” and “Candyman,” among others. ‘Ain’t No Other Man’ earned her a Grammy nomination.

Aguilera starred in Martin Scorsese’s documentary ‘Shine a Light’ in 2008. It included her and Mick Jagger performing ‘Live With Me.’ In the same year, she appeared in a cameo in the film ‘Get Him to the Greek.’
In 2010, Aguilera released her sixth studio album, ‘Bionic,’ on which she collaborated with musicians such as M.I.A., Nicki Minaj, Peaches, and others. Hit singles included ‘You Lost Me,’ ‘Not Myself Tonight,’ and others. The album was a flop on the charts. She made her first full feature film, a musical called ‘Burlesque,’ in 2010. ‘Steve Antin,’ who wrote and directed the film, had her in mind when he penned it. Many of the songs for the film were co-written by Aguilera, who collaborated with Kirsten Bell, Stanley Tucci, and others.
‘Lotus,’ Aguilera’s seventh studio album, was released in 2012. The album received mixed reviews from critics and did not perform well in the marketplace. It featured tracks such as ‘Your Body,’ ‘Just a Fool,’ and others.

Aguilera married her lover, Jordan Bratman, a record producer, in 2005. She married in a nondenominational wedding that cost her $200,000 in the United States. For her wedding, she donned a Christian Lacroix gown.
After giving birth to her son Max Liron Bratman in 2008, Aguilera and Bratman decided to divorce after five years of marriage. They never obtained a divorce, but they’ve been separated for a long time.
Matthew Rutler, Aguilera’s production assistant, became her boyfriend in 2010. He is five years her junior. They’ve remained together.

Christina Aguilera has a net worth of $160 million.

She was widely chastised for posing naked for Rolling Stone, but she dismissed all of the criticism, saying that she enjoys experimenting with her sexuality and wants others to see her in that way. She is most known for her contentious kiss with Madonna on the stage of the MTV Video Music Awards while performing with Britney Spears on Madonna’s ‘Like a Virgin.’ During the Grammy Awards in 2007, she paid tribute to James Brown by singing his song “It’s a Man’s World.”