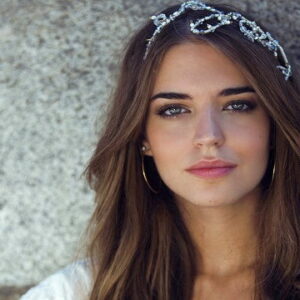 As a young, pretty teenager, Clara Alonso came out of her shell and into the fashion world, where she and other Spanish models carved out a place for themselves. She was not only able to make a name for herself in her chosen field, but she also got the chance to work with some of the biggest fashion brands in the world. This green-eyed beauty went on to become one of Spain’s most famous models. She worked for many international fashion magazines and fashion houses, including Armani Exchange, GUESS, Mango, Bottega Veneta, TCN, Miguel Palacio, Nicolas Vaudelet, Glamour (Spain), Harper’s Bazaar (Spain), Vogue (Spain), and Elle (Spain). She is best known for being the only Spanish model to have been in Victoria’s Secret’s fashion shows in recent years. Different modeling agencies have been interested in this seductive Spanish star, which is good for her career. Today, she is known around the world as one of the most beautiful and famous Spanish models. Her great body and dark blonde hair, along with her style, elegance, and class, make her one of the best and sexiest things Spain has ever given the world.

She was born in Madrid, Spain, on September 21, 1987.
She started modeling when she was 15 and walked in many fashion shows in Spain.

After she was done with school, a famous casting director named John Pfeiffer saw her and helped her walk the runway for different shows. This was the start of her international career.

In 2008, she was a model for Diane von Furstenberg’s Cruise 2008-09 collection, which was shown for the first time in Florence, Italy. She went to New York City in 2009 for the Spring/Summer fashion show not long after that.
She was lucky enough to work for Custo Barcelona and show up often at Mercedes-Benz Fashion Week Madrid while she was modeling in Spain.

Victoria’s Secret, a big lingerie company, hired her at the age of 21 for their fashion week in Miami in 2008. She has been a model at their fashion shows ever since.
Yu Tsai, an American photographer, chose her to shoot a lingerie campaign for the fashion brand GUESS in Los Angeles.

She was in a TV ad for Adolfo Dominguez’s “Agua Fresco de Rosas” fragrance as the new, young face of the brand.
The 2009 Larios Calendar had a picture of her.
In 2011, she was the perfect model for the ad campaign for Blanco’s NIGHT line, which was a glittering collection of party clothes.

She was one of the Spanish supermodels who went to Madrid in 2014 to see the opening of the Marypaz flagship store.
She has walked the runway for Bottega Veneta, Brian Reyes, Luca Luca, Mango, Nanette Lepore, Oscar De La Renta, Prabal Gurung, Diane Von Furstenberg, and Emporio Armani, among others.

She has been on the cover of many international fashion magazines, such as Swedish Elle, Spanish Vanity Fair, S Moda, Spanish Glamour, Norway Elle, Tesla, Moose, Spanish Clone, Brazilian Elle, and Vanidad.
She has made herself known by being in a few fashion editorials, such as Spanish Harper’s Bazaar, Spanish Vogue, GQ Russia, Elle Vietnam, and Elle Spain.

She has been the face of a number of high-end fashion brands, including AX Armani Exchange, GUESS, Braun, Hoss Intropia, Calzedonia, and Revlon Professional.

She has worked for agencies like Women Milan in Milan, IMG Models in New York, MP Mega Miami in Miami, Modelwerk in Hamburg, IMM Bruxelles in Brussels, and Marilyn Agency in Brussels (Paris).

She was on the cover of the Spanish version of Vanity Fair magazine’s fifth-anniversary issue, which came out in November 2013. She was there with tennis legend Rafael Nadal.

In 2008, she made history by being the first Spanish model to walk the runway at the Victoria’s Secret Fashion Show since 1999. Before her, Esther Canadas in 1997 and Eugenia Silva in 1999 were the only Spanish models to do so.

David Feito, a Spanish rocker and guitarist in the pop band “The Dream of Morpheus,” is said to be her boyfriend since 2010.

Her grandmother gave her the nickname “Bebi” when she was born. It sounds like the word “baby” in Spanish, which is what it actually means.