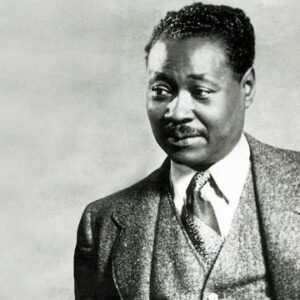 Festus Claudius McKay, a Jamaican-American author and poet, was one of the most prominent figures in the Harlem Renaissance. Claude McKay, as he was better known, was the author of several award-winning literary works, including the critically praised novel ‘Home to Harlem.’ He was a versatile writer who wrote anything from rustic Jamaican life poetry to more serious intellectual writings. In early twentieth-century America, life was difficult for young black men, and he witnessed widespread racism. He used his works to express his rage at white rulers, including creating militant-style poems. In his works, he frequently discussed the hardships and victories of black people in a racist America. His passion for reading began at a young age, and he was a voracious reader of philosophical, religious, and scientific writings. He began writing his own poems when he was just ten years old. His meeting with Walter Jekyll, who became his mentor and inspired him to write, was a watershed moment in his life. McKay, a Jamaican immigrant, was taken aback by the extent of prejudice in the United States. Racism, black life, and black emancipation were all topics he addressed in his writings.

Thomas Francis McKay and Hannah Ann Elizabeth had 11 children, and he was the youngest of them. His father and mother were both farmers. His older brother was a teacher, and when Claude was seven years old, he was sent to live with him. He was a voracious reader who consumed books on literature, philosophy, religion, and science.

In 1907, he was introduced to Walter Jekyll, who pushed him to write and establish his own creative style. Under the guidance of his mentor, he thrived and began penning rhymes in Jamaican vernacular. In 1912, he published his first book of poems, ‘Songs of Jamaica,’ with Jekyll’s support.

In 1912, he came to the United States to study at Booker T. Washington’s Tuskegee Institute. He came across widespread racism there, which inspired him to create more poetry. He did not enjoy his time there and transferred to Kansas State University.

Under the pseudonym Eli Edwards, he wrote two poems in 1917. Crystal and Max Eastman, who produced the socialist magazine ‘The Liberator’ in 1919, became friends with him. He was named co-executive editor of ‘The Liberator,’ a position he held until 1922. During this time, America was beset by racial violence, which led him to write the poem ‘If We Must Die.’

The socialist newspaper ‘Workers’ Dreadnought’ hired him as a journalist. He became interested in communism and attended the Communist Unity Conference in London, which led to the formation of the Communist Party of Great Britain. Throughout, he continued to write poetry.

From November 1922 to June 1923, he traveled to the Soviet Union and met many prominent Bolsheviks. In December 1923, he wrote an essay titled “Soviet Russia and the Negro” about his experiences in Russia. His debut novel, ‘Home to Harlem,’ was released in 1928 and follows the narrative of a black soldier who abandons his military responsibilities to return home. The novel provided an accurate and thorough portrayal of urban black life, which was characterized by prostitution and gambling.

The next year, he published the novel “Banjo: A Story Without a Plot.” It was about an African-travels American’s in Marseilles, France. However, this book did not have the same level of success as its predecessor. In 1932, he published ‘Gingertown,’ a collection of short stories, and in 1933, he published ‘Banana Bottom,’ a novel. These works were not well-received when they were first published, but they grew in importance over time.

‘A Long Way from Home,’ his autobiography, was released in 1937. He talked about the difficulties he encountered as a black guy in a white society. However, numerous facts from his life are absent from this book, making it untrustworthy. He contributed essays and articles to ‘The Nation,’ ‘New Leader,’ and the ‘New York Amsterdam News’ in the 1930s and 1940s. In 1940, he published a non-fiction book titled “Harlem: Negro Metropolis.”

His most notable work was his debut novel, ‘Home to Harlem.’ It chronicles the narrative of a black soldier who deserts the United States Army during World War I and returns to Harlem. Ray, a disillusioned Haitian immigrant, has a story that is paralleled with his.

In 1912, the Musgrave Medal was awarded to him by the Jamaican Institute of Arts and Sciences for his poetry collections ‘Songs of Jamaica’ and ‘Constab Ballads.’ For his novels ‘Harlem Shadows’ and ‘Home to Harlem,’ he received the renowned Harmon Foundation Award for excellent literary achievement in 1929.

In 1914, he married Eulalie Lewars, his childhood sweetheart. They only had one child. In 1948, he died of a heart attack.

Claude is one of the wealthiest poets and one of the most well-known. Claude McKay’s net worth is estimated to be $1.5 million, according to Wikipedia, Forbes, and Business Insider.