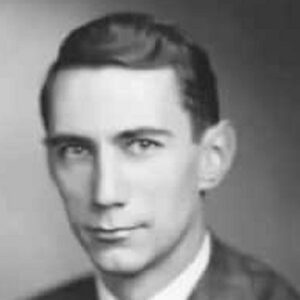 Claude Elwood Shannon was an American mathematician, cryptographer, and electrical engineer who rose to prominence after publishing the seminal paper ‘Mathematical Theory of Communication’ in 1948, which conceptualized information theory. As a result, he is commonly regarded as the “Father of Information Theory.” Shannon, a native of Michigan, was inspired as a child by Thomas Edison, who he subsequently discovered was a relative. He received his bachelor’s degrees in mathematics and electrical engineering from the University of Michigan before enrolling at MIT to further his education in electrical engineering. In 1937, he also developed the digital circuit design theory. During WWII, he worked for Bell Labs on fire-control systems and cryptography research. He was given credit for the invention of signal-flow diagrams in 1942. He joined the MIT faculty in 1956 and worked in the Electronics Research Laboratory (RLE). Shannon remained a member of the institute until 1978. Later in life, he was diagnosed with Alzheimer’s disease and sent to a Massachusetts nursing home. Shannon died in February 2001 at the age of 84.

Shannon, the son of Claude Sr and Mabel Wolf Shannon, was born on April 30, 1916, in Petoskey, Michigan, United States of America. His father was a prosperous businessman who also served as a probate judge at one point. His mother was a language teacher who subsequently became Gaylord High School’s principal.
Shannon spent most of his childhood in Gaylord and graduated from Gaylord High School in 1932. He has shown an interest in mechanical and electrical stuff since he was a child.

Science and mathematics were his two favorite disciplines. In his spare time, he created a variety of devices, including model planes, a radio-controlled model boat, and a barbed-wire telegraph system that linked his and a friend’s houses half a mile apart. He also worked for the Western Union organization as a messenger.

Shannon attended the University of Michigan after high school to pursue bachelor’s degrees in electrical engineering and mathematics. He began graduate studies at Massachusetts Institute of Technology after graduating from there in 1936.

He worked on Vannevar Bush’s differential analyzer, one of the first analogue computers in history, at MIT. Following that, he devised switching circuits based on Boole’s ideas.
His master’s thesis, ‘A Symbolic Analysis of Relay and Switching Circuits,’ was published in 1937. The following year, a study based on the thesis was published. In 1940, he received his PhD from MIT. ‘An Algebra for Theoretical Genetics,’ was the title of his doctoral dissertation.

In 1940, he was also awarded a National Research Fellow at Princeton’s Institute for Advanced Study. He had the opportunity to meet Hermann Weyl, John von Neumann, Albert Einstein, and Kurt Gödel at Princeton.
Shannon secured a job at Bell Labs to work on fire-control systems and cryptography when WWII broke out. He was given credit for establishing signal-flow diagrams in 1942. While investigating the functional operation of an analogue computer, he discovered the topological gain formula.

Shannon first met Alan Turing, a British mathematician, in early 1943. Shannon saw that their opinions complemented one other during their conversation.
‘Data Smoothing and Prediction in Fire-Control Systems,’ co-authored by Shannon, Ralph Beebe Blackman, and Hendrik Wade Bode, is a special study on fire control. The NDRC released it in 1945 as a collection of technical studies as a final move before shutting down the facility.

Shannon’s cryptographic work was significantly more intertwined with his subsequent communication theory works.
He worked on a classified memorandum at Bell Telephone Labs titled “A Mathematical Theory of Cryptography” at the end of the war, which was completed in September 1945. A declassified version was published in the Bell System Technical Journal in 1949 under the title ‘Communication Theory of Secrecy Systems.’ He joined the MIT faculty in 1956 and was assigned to their Research Laboratory of Electronics (RLE). In 1978, he departed the institution.

Shannon received honorary doctorates from a number of universities over his career, including his alma school, the University of Michigan, as well as Princeton, Edinburgh, and Pennsylvania.
The civil engineering associations in the United States awarded him the Alfred Noble Prize in 1939.
In 1972, the Claude E. Shannon Award was established to honor him.
Shannon was elected into the National Inventors Hall of Fame after his death in 2004.

Shannon’s groundbreaking paper ‘A Mathematical Theory of Communication’ was published in the ‘Bell System Technical Journal’ in 1948. It’s about figuring out the most efficient way to encode information that a user wants to send out. For this, he used methods from Norbert Wiener’s probability theory, which were just beginning to be applied in communication theory at the time.

Shannon developed the subject of information theory by defining information entropy as a unit of information content in a message that also acts as a unit of uncertainty decreased by the message.
Shannon and Robert Fano hypothesized on a data-compression technique called Shannon-Fano coding in a 1948 essay, which they implemented the following year.

Shannon gave a simpler version of the information theory in his co-authored book ‘The Mathematical Theory of Communication,’ which he co-wrote with Warren Weaver.
The basic effect of information theory on natural language processing and computational linguistics was further confirmed in 1951. Shannon proved upper and lower bounds of entropy on the statistics of English in his work ‘Prediction and Entropy of Printed English,’ giving a statistical foundation for language study.
He also demonstrated that adding whitespace to the alphabet as the 27th letter reduces unreliability in written language, demonstrating a strong quantitative link between cultural practice and probabilistic cognition.

Shannon has had two marriages in his life. Norma Levor was his first wife, whom he married in January 1940. A year later, their divorce was finalized. Betty Shannon (née Mary Elizabeth Moore) met Shannon at Bell Labs, where Betty worked as a numerical analyst. She was taken with the shy but smart young man and agreed to go out on a date with him. They were dining together every night before they knew it. In 1949, the couple exchanged wedding vows. She worked with him on some of his most important inventions.

Robert James Shannon and Andrew Moore Shannon, as well as Margarita Shannon, were the couple’s three children. Winchester, Massachusetts was the family’s home. Robert, their oldest son, died in 1998, predating both Claude and Betty.

Shannon was a chess, juggling, and unicycling enthusiast outside of the classroom. He created inventions such as the THROBAC Roman numeral computer, juggling machines, and a flame-throwing trumpet.
He also created the Minivac 601, a digital computer trainer that taught employees how to use computers. Along with Edward O. Thorp, he is thought to be the co-inventor of the first wearable computer.

Shannon’s doctors told him he had Alzheimer’s disease in the later years of his life. Shannon died in a care home in Medford, Massachusetts on February 24, 2001. He is buried in Gaylord, Otsego County, Michigan’s Fairview Cemetery. On the 100th anniversary of his birth on April 30, 1916, the Shannon Centenary recognized Claude Shannon’s outstanding life and achievements. Shannon was an apolitical person. He was an atheist as well.