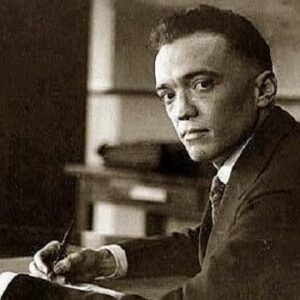 Clyde Tolson was a former American secret service operative and the FBI’s first Associate Director, serving for more than four decades. He was largely responsible for personnel and discipline and was recognized by President Lyndon B. Johnson with the ‘President’s Award for Distinguished Federal Civilian Service’ for improving law enforcement proficiency. He spent the majority of his career as an assistant to J. Edgar Hoover, the FBI’s first director, and briefly served as interim head of the FBI following his death. Personally, the two were inseparable throughout the day during the four decades they worked together. The fact that Tolson retired shortly after Hoover’s death and moved into the estate he had inherited fueled speculation about the nature of their connection and fueled the imagination of subsequent writers who wrote about their intimacy. While other subsequent accounts identified the two bachelors as romantic partners, the specifics of their connection remain unknown. Both of them were fully aware of the potential ramifications of an openly gay relationship and how such discoveries could jeopardize their jobs and hence kept their personal lives hidden.

He graduated from Laredo High School in 1915. He then studied at Cedar Rapids (Iowa) Business College before joining the government in 1917 as a clerk in the War Department.

While working for the government, he continued his formal education by enrolling in night classes at George Washington University. After graduating in 1925, he studied law at the university, earning a Bachelor of Laws degree in 1927. He was a member of Sigma Nu’s Delta Pi Chapter throughout his time there.

Between 1919 and 1928, Clyde Tolson worked as the confidential secretary to three Secretaries of War – Newton D. Baker, John W. Weeks, and Dwight F. Davis. He apparently applied to the FBI in 1928 with the intention of using his job as a stepping stone to establishing a private law practice in Cedar Rapids and was hired as a Special Agent within a month.

He was promoted to chief FBI clerk after working at the FBI’s field offices in Boston and Washington, D.C. He was appointed assistant director in 1930, according to his biography in Who’s Who in America.
In 1936, he assisted FBI Director J. Edgar Hoover in apprehending Alvin Karpis, a gangster and bank robber. Later that year, he survived a confrontation with criminal Harry Brunette.

In 1942, he was a member of the FBI team that apprehended Nazi saboteurs on Long Island and in Florida. He was appointed Associate Director of the FBI in 1947 and was responsible for budget and administration.

Clyde Tolson was largely responsible for personnel and discipline during his tenure. He was commended for his achievements in “improving law enforcement proficiency at all levels and steering the Federal Bureau of Investigation to new heights of achievement during periods of great national challenge.”

Clyde Tolson suffered a stroke in 1964, and his health deteriorated thereafter, rendering him unfit for FBI duties. Clyde Tolson, however, was retained on the job by then-FBI Director J. Edgar Hoover in 1970, despite nearing the necessary retirement age.

Tolson directed Mark Felt, the Bureau’s third-ranking official at the time, to write his letter of resignation on May 3, 1972, one day after Hoover’s death. On May 4, 1972, the day of Hoover’s funeral, he eventually resigned from the Bureau, citing bad health as the reason for his retirement.

His health deteriorated further after he lost his work, and he was hospitalized at Doctors Community Hospital in Washington, D.C., on April 10, 1975, for renal failure. He died of heart failure four days later, on April 14, 1975, at the age of 74, and was interred at the Congressional Cemetery, near Hoover’s grave.

Clyde Tolson’s connection with J. Edgar Hoover, the first Director of the FBI, has been a source of contention for decades, both during and after their respective deaths. Both Tolson and Hoover were bachelors, and their intimacy fueled speculations of a love relationship, despite the fact that they were careful to keep their private lives quiet to avoid jeopardizing their employment.

Hoover arrived daily at 9 a.m. in his bullet-proof limousine to pick up Tolson from his house for the majority of the 40 years they worked together, and they frequently walked along Constitution Avenue before commencing work. He was frequently referred to be Hoover’s alter ego due to the fact that the two “rode to and from work together, ate lunch together, traveled on official business together, and even vacationed together.”

Tolson led burial ceremonies for Hoover upon his death on May 2, 1972, and was presented with the United States flag draped over Hoover’s coffin. He also inherited US$551,000 from Hoover’s inheritance and subsequently moved into his residence.

Details regarding their connection emerged through numerous different interpretations as a result of research conducted on their lives for books and films. They were apparently seen holding hands in a car by celebrated model Luisa Stuart, a taxi driver reportedly spotted them kissing, and gay rights campaigner Harry Hay asserted that they were known as a pair at gay bars.

Their romance has been referenced several times in novels and biographies, as well as represented on television and in films. Among these are the 1977 film ‘J. Edgar Hoover: The Private Files’, the 1987 television picture ‘J. Edgar Hoover, the 1995 film ‘Nixon’, and the 1997 novel ‘Underworld’.

Clint Eastwood informed the J. Edgar Hoover Foundation before the release of his 2011 film ‘J. Edgar’ that the film would not “portray an openly homosexual relationship” between Hoover and Tolson. Nonetheless, the two actors’ connection was the film’s core focus, which included a passionate kiss between Leonardo DiCaprio and Armie Hammer, who played the two characters.

Clyde is one of the wealthiest and most popular law enforcement officers. Clyde Tolson’s net worth is estimated to be $1.5 million, based on our analysis of Wikipedia, Forbes, and Business Insider.

While Clyde Tolson is best known for his work as an FBI agent, he was also an inventor. He held patents for bottle caps that maintained the carbonation of soft drinks after the bottles were opened, for a mechanism that automatically opens and closes windows, and for equipment that operated emergency exits in aircraft.

He was promoted to the post of Hoover’s deputy with less than 18 months of FBI experience. This is interpreted by some as an indication that Hoover favored gay escapades.