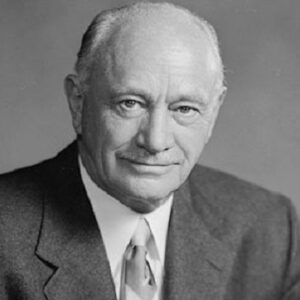 Conrad Nicholson Hilton was an American hotelier who founded the Hilton Hotel chain, the first of its kind in the post-World War I era, on his own. He was born in the late 1800s to a hardworking father who owned a general store and a pious mother, and he learnt the significance of both work and devotion at a young age. Although his initial ambition was to become a banker, he changed his mind after witnessing streams of people entering and exiting the hotel where he was sitting. He then purchased the hotel and, within a year, had recouped his investment, not only by maximizing space but also by adding additional services to the visitors. He went on to buy seven more hotels after that, virtually bankrupting himself due to the Great Depression. He did not, however, waver from his ambition, and as the depression passed, he continued to expand his hotel business. The business included 188 hotels in 38 towns across the country and 54 hotels abroad by the time he retired.

Conrad Nicholson Hilton was born in San Antonio, New Mexico, on December 25, 1887. Augustus Halvorsen Hilton, his father, was a Norwegian immigrant, and Mary Genevieve (née Laufersweiler), his mother, was an American citizen of German heritage. Conrad was the second of eight children born to the marriage.

He joined his father’s general shop on a profit-sharing basis when he turned 21 but quickly became disgruntled by the lack of flexibility. As a result, he began looking for a new career path and entered politics.

Conrad went to San Antonio after his tenure expired and acquired enough money to open a bank. When the United States of America entered the First World War in 1917, Conrad sold his bank to support the war effort.
Conrad served in the Quartermaster Corps in France for two years before returning to San Antonio after being released in 1919. By that time, his father had died, and he had to take over his father’s businesses, which were not doing well.

Furthermore, having traveled the globe, Conrad had no desire to live in a little town like San Antonio. As a result, he began seeking for an alternative. He was persuaded by an old acquaintance to travel to Texas, where the oil boom had already begun.

Conrad Hilton traveled to Wichita in 1919 to purchase a bank, but backed out when the vendor hiked the price at the last minute. Rather, he purchased the ‘Mobley Hotel’ in Cisco, Texas. Despite the fact that it had 40 rooms, he had to construct extra rooms to meet demand.

He was a firm believer in two concepts from the start. The first was ‘digging for gold,’ which meant making effective use of available space. He saw, for example, that guests preferred to eat out and that the hotel made relatively little money on meals. As a result, he turned the restaurant into more guest rooms, which were in scarce supply at the time.

The ‘esprit de corps’ was his second premise. It entailed inspiring the staff to offer exceptional service, which he accomplished by praising them when clients expressed satisfaction with their stay at the hotel.
In addition, he set up little shop windows in the lobby, where he sold newspapers, magazines, razors, toothbrushes, and toothpastes, among other things. They not only increased earnings, but they also helped to attract more visitors. ‘Hotel Mobley’ became a tremendous success very quickly.

Hilton was able to return his investment in less than a year. He then purchased the ‘Melba Hotel’ in Fort Worth and the ‘Waldorf Hotel’ in Dallas. Both of these hotels were in poor condition when they were renovated, but they looked so wonderful afterward that he began to refer to them as “dowagers.”

Hilton chose to build his own hotel, the ‘Dallas Hilton,’ in 1924, and it opened the following year. It was not just his first hotel, but it was also the first hotel to bear the name “Hilton.” He took the land on lease for 99 years, a concept that was yet unknown in Texas, because he didn’t want to tie up his money.

He was soon compelled to sell many of his properties and work as a manager for a large hotel chain. During this difficult time, he recalls his mother telling him that praying was the best investment he could make, and it did really assist him greatly.

Hilton returned to his hotel business after the Great Depression ended. He not only repurchased his previous holdings, but he also erected the ‘Hotel Andaluz’ in Albuquerque, New Mexico, in 1939. It was his first time staying in a motel outside of Texas.

Later, he traveled west, purchasing the films ‘Breakers’ and ‘Sir Francis Drake’ in Los Angeles and San Francisco, respectively. He relocated his headquarters to Los Angeles in 1942 and began expanding eastward from there.
He purchased the ‘Roosevelt Hotel’ in New York City in 1943. In 1945, he bought Chicago’s ‘Palmer House’ and the ‘Stevens Hotel,’ which was the world’s largest hotel at the time, and renamed it ‘Conrad Hilton’ after remodeling it.
Despite its size, Hilton continued to follow his ‘digging for gold’ philosophy. By dividing a ballroom horizontally and erecting it halfway between the original floor and the high ceiling, he added a whole floor.

So far, all of his hotels have been run on their own. He founded the Hilton Hotel Corporation in 1946 and floated it on the New York Stock Exchange the following year. Hilton was the largest stakeholder, owning $9 million in stock.
In 1949, Hilton signed a 20-year lease on the ‘Hotel Caribe Hilton’ in San Juan, Puerto Rico. This was the group’s first hotel outside of the United States, and it was here that the ‘Hilton International Company’ was formed, eventually becoming the world’s first hotel chain.

In October 1949, he realized a long-held ambition by acquiring the management rights to New York City’s famed ‘Waldorf-Astoria Hotel.’ In 1972, the Hilton Hotels Corporation purchased the property outright.
His biggest competitor so far has been Statler Hotels. He bought the company for a record price of $111,000,000 in 1954. Hilton was able to make the move because he had already listed his company on the New York Stock Exchange, allowing him to raise extra funds from outside investors.

Throughout the 1950s and 1960s, he continued to buy hotels both in the United States and abroad. He also became a shareholder in companies like Carte Blanche Credit Company and American Crystal Sugar Company. However, they did not have the same level of success as his hotel operations.

He retired from active administration of the corporation in 1966, appointing his son Barron as President. He remained Chairman of the Board, however, until his death nearly 13 years later.

The ‘Dallas Hilton’ was Conrad Hilton’s first significant hotel. He chose the tallest point in downtown Dallas as the location. The 14-story skyscraper housed a hotel that provided a wide range of services. The hotel, which cost $1360,000 to construct, opened on August 6, 1925.

The Mayflower Hotel in Washington, DC, the Palmer House in Chicago, and the Plaza Hotel and Waldorf-Astoria in New York City were among the other significant properties later bought by Hilton.
His book, ‘Be My Guest,’ is also well-known. The book, which was first published in 1957, is still considered a bible for all hotels.

Conrad Hilton established the Conrad N. Hilton Foundation in 1944 with the goal of “changing the lives of poor and vulnerable people everywhere.” Before his death he bequeathed the bulk of his possessions to this foundation.

Conrad Hilton married Mary Adelaide Barron in 1925. Conrad Nicholson Hilton Jr., William Barron Hilton, and Eric Michael Hilton were the couple’s three children. When the couple’s marriage fell apart in 1934, he granted her a divorce against his will and the rules of the Roman Catholic Church.

Hilton married ZsaZsa Gabor, a Hungarian actress, in a civil ceremony in 1942. The marriage was doomed from the start and ended in 1946 with a divorce. Constance Francesca Hilton was their only child.
Hilton married Mary Frances Kelly in 1976. This wedding took place in a church. Their relationship lasted till he died in 1979.

Hilton died on January 3, 1979, at the age of 91, of natural causes. Calvary Hill Cemetery, a Catholic cemetery in Dallas, Texas, was where he was laid to rest.
The Conrad N. Hilton Foundation, which he established, carries on his legacy.

Barron Hilton said on December 25, 2007, that he will leave nearly 97 percent of his money to a charity unitrust that would eventually be merged with the Conrad N. Hilton Foundation, which was valued at $2.36 billion at the time (equal to $2.95 billion in 2020).