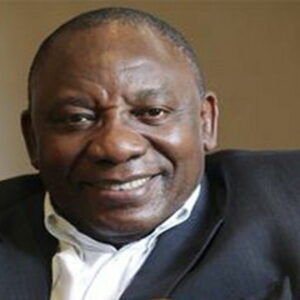 South Africa’s fifth and current post-apartheid president is Matamela Cyril Ramaphosa. He assumed office on February 15, 2018, following the resignation of his predecessor, Jacob Zuma, and a subsequent National Assembly vote. He was chosen as the President of the African National Congress (ANC) and the Chairman of the National Planning Commission during the ANC National Conference in Nasrec, South of Johannesburg in December 2017. He was highly known for being a skilled strategist and negotiator. Prior to that, he was the ANC’s Chief Negotiator throughout South Africa’s democratic transition. He also played a key role in ending apartheid nonviolently by founding the National Union of Mineworkers (NUM), the largest and most influential labor union in South Africa. With an estimated net worth of over $675 million, Ramaphosa is also a very successful businessman. He previously held a sizeable amount of shares in firms like McDonald’s South Africa and served as chairman of the board of directors of MTN Group. Although he has never been formally charged with a crime, he has faced a number of significant scandals throughout his career, including the MTN Irancell scam and the Marikana Massacre.

Matamela Cyril Ramaphosa was born on November 17, 1952, in Soweto, Johannesburg. His parents are Erdmuth and Samuel Ramaphosa. His mother was a housewife and his father was a retired policeman. Douglas is the brother of Ramaphosa. He was raised in the deprived Soweto township.

He attended Sekano Ntoane High School and Tshilidzi Primary School before graduating from Mphaphuli High School in Sibasa, Venda, in 1971. He then enrolled in a law program at the University of the North (Turfloop) in 1972.
Ramaphosa was involved in politics while still a student, joining the Black People’s Convention and the South African Students Organization (SASO) (BPC). As a result of his involvement in planning pro-Frelimo rallies, he was sentenced to 11 months of solitary incarceration under Section 6 of the Terrorism Act in 1974. Following disturbances in his hometown, the authorities apprehended him a second time in 1976 under the Terrorism Act. For the ensuing six months, he was held captive.

Following his release, he started working as a law clerk for a Johannesburg-based law company while continuing his legal education at the University of South Africa (UNISA), where he earned his B. Proc. Degree in 1981.

Cyril Ramaphosa joined the Council of Unions of South Africa (CUSA) as a legal department advisor as soon as he completed law school. In response to advice from his elders, he founded the National Union of Mineworkers in 1982. (NUM). * He organized conferences while serving as the new organization’s first secretary, which finally resulted in the creation of the Congress of the South African Trade Union (COSATU). At COSATU’s launch rally in Durban in December 1985, he delivered the keynote address.

He had become one of the movement’s key spokesmen against apartheid in South Africa by 1990. He traveled to Lusaka, Zambia, with the freed ANC political prisoners. He was made the chairman of the National Reception Committee, which was established to plan Nelson Mandela’s release and the subsequent welcome rallies. He also participated in the global Mandela Reception Committee.

After winning an election at a conference in Durban, he took office as the new general secretary of the ANC in July 1991. A small group of ANC members negotiated Ramaphosa with the National Party administration to eliminate apartheid.

Ramaphosa was chosen as a parliamentarian in 1994 at the country of South Africa’s first entirely democratic election. The same year, Nelson Mandela was elected president of South Africa.

Despite not being a member of the South African Communist Party (SACP), Ramaphosa has insisted over the years that he is a socialist. Ramaphosa then served as chair of the parliament’s Constitutional Assembly and was an important part of the government of national unity. Ramaphosa ran for president of South Africa after Nelson Mandela renounced a second term; he was defeated by Thabo Mbeki. Ramaphosa left all of his political roles after the loss and joined the business sector, where he worked as a director for New Africa Investments Limited.

He returned to national politics in December 2012 to seek the position of deputy president after several rumors. He received 3,018 votes to become the ANC’s Deputy President on December 18. On May 25, 2014, he was appointed South Africa’s deputy president. He was chosen by former President Jacob Zuma, and Chief Justice Mogoeng Mogoeng administered the oath of office.

Soon after, the president named him to the positions of Chairman of the National Planning Commission and Leader of Government Business in the National Assembly under section 91(4) of the Constitution.

One of the most prosperous businessmen in South Africa is Cyril Ramaphosa, whose net worth is estimated by Forbes to be $675 million. He has invested in the banking, insurance, real estate, and telecom industries as well as the resource and energy sectors (SEACOM).

He formed the investment holding company Shanduka Group in 2001. In addition, he held leadership positions at The Bidvest Group Limited, MTN, Macsteel Holdings, Alexander Forbes, and Standard Bank, to mention a few. His 20-year master franchise agreement to manage 145 McDonald’s locations in South Africa was inked in 2011.
Ramaphosa resigned from all of his former positions in the private sector after making the decision to run in the general election in 2012.

Other Businesses of Cyril Ramaphosa

Owner of the Ntaba Nyoni farm in Mpumalanga, Ramaphosa has roughly 100 Ankole breeding cows there as of August 2017. The book “Cattle of the Ages, Stories, and Portraits of the Ankole Cattle of Southern Africa,” co-authored by him, was published in 2017.

In 1985, he authored the book “Organising on the Mines,” and in 2002, he released “Constitutional Law: Analysis and Cases.” Ziyad Motala contributed to writing the latter.

Former MTN worker Chris Kilowan accused the corporation of buying off Iranian government officials while he was the chair of the MTN Group. The MTN Irancell scandal was the name given to this affair by the media.
To look into this affair, a commission headed by retired British judge Lord Hoffmann was established. The commission determined that Kilowan was a fantasist and a conspiracy theorist and that MTN was “not guilty” of all of the allegations.

The police opened fire on a group of striking Lonmin employees atop a “koppie” (hilltop) close to the Nkaneng shanty settlement in Marikana on August 16, 2012. The shooting resulted in the deaths of 34 miners and the injuries of 78 more. The majority of the deceased were shot in the rear and far from the police line, it was later discovered. The single deadliest incident of institutional brutality since the end of the apartheid era, known in the media as the “Marikana Massacre,” outraged the nation.

Later, it was discovered that Ramaphosa, a shareholder in Lonmin, had been approached by the organization’s management to coordinate “concomitant action” against “criminal” demonstrators. Many believed he was the perpetrator of the atrocity as a result. However, it was subsequently determined that his action was not the cause of the heightened police presence on the scene because the killings had already occurred.

In October 1987, in Stockholm, the Olof Palme prize was given to Cyril Ramaphosa.
Because of his outstanding efforts to create actuarial professionals from historically underprivileged communities in South Africa, he was awarded the title of Honorary Actuary by the Actuarial Society of South Africa.

Cyril Ramaphosa has had two marriages. Businesswoman Nomazizi Mtshotshisa was his first spouse. 2008 saw the couple’s divorce. Later, he wed Dr. Tshepo Motsepe, the sister of Patrice Motsepe, a mining billionaire. Together, they are parents to four kids. He was accused of having extramarital affairs in 2017, but he angrily rejected them and said they were motivated by politics.

In 2004, he founded the Cyril Ramaphosa Foundation. The organization’s goal is to promote the growth of an empowered, inclusive society.

Ramaphosa was chosen to serve as the Commonwealth Business Council’s first vice chairman.

A politician from South Africa named Cyril Ramaphosa is worth $450 million. Although he made his riches as the chairman of the investment business Shanduka Group, he is most recognized for serving as the President of South Africa. Prior to being acquired by a rival, Shanduka had expertise in mining, finance, Coca-Cola bottling operations, and even McDonald’s franchises. He has at various points been listed as one of the top 10 wealthiest South Africans.