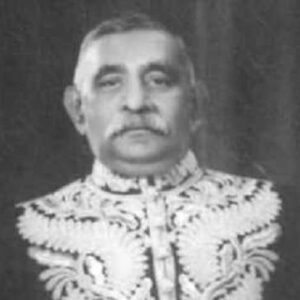 Don Stephen Senanayake, known as the “Father of the Nation,” was Ceylon’s (now Sri Lanka’s) first Prime Minister after independence. He is recognized for his role as a leader in the nonviolent political movement that sought independence from the British. The nation was given self-rule as the Dominion of Ceylon on February 4, 1948. In 1948, Senanayake was elected as the first Prime Minister of independent Ceylon, a position he held until his death. Prior to becoming Prime Minister, he was elected to Ceylon’s Legislative Council. He served as the Minister of Agriculture and Lands after representing the ‘Ceylon National Congress’ in the newly formed ‘State Council of Ceylon.’ He established the ‘Land Development Ordinance,’ which aided in the cultivation of barren regions through the implementation of numerous irrigation programs. He worked to modernize agriculture and emphasized the development of cooperatives. He was crucial in the implementation of many major hydropower and irrigation projects, including ‘Gal-Oya,’ ‘Inginiyagala,’ and ‘Udawalawa.’ Later, he broke away from the ‘Ceylon National Congress’ and created the ‘Union National Party’ (‘UNP’). All communities, including Sinhalese, Tamils, and Muslims, revered him as Prime Minister.

He was born on October 20, 1884, in the village of Botale in Sri Lanka’s Western Province. As one of Mudaliyar Don Spater Senanayake and Dona Catherina Elizabeth Perera Gunasekera Senanayake’s four children, he came from a devout Buddhist family.

He received his schooling at Mutwal’s prestigious private Anglican boys school, ‘S. Thomas’ College.’
After that, he worked as a clerk for the Surveyor General’s Department. He eventually quit his job to work on his father’s rubber plantation.

He and his two brothers were members of the ‘Temperance Movement,’ a Buddhist and anti-colonialist movement founded in 1912. In Ceylon, the movement played a key role in the ‘National Independence Movement.’
The three brothers enlisted in the ‘Colombo Town Guard,’ a regiment affiliated with the ‘Ceylon Defence Force,’ in 1914, at the start of the ‘First World War’ (predecessor of Sri Lanka Army).

During the 1915 riots, the brothers were imprisoned without charge because the ‘Temperance Movement’ was considered subversive by Sir Robert Chalmers, the British Governor at the time. As the British resorted to ruthless brutality to quell the riots, the country’s educated middle class rose to lead the contemporary independence struggle.
His brother Fredric Richard founded the ‘Lanka Mahajana Sabha’ party in 1919, and he and Don Charles became key members of the party, which was instrumental in Ceylon’s independence.

In 1924, he was elected to the ‘Legislative Council of Ceylon’ from Negambo in the Western Province of Ceylon.
He stepped in to lead the independence campaign after Fredrick Richard died while on a trip to Bodh Gaya, India, in 1925.

The ‘Donoughmore Constitution’ of 1931 replaced the ‘Legislative Council of Ceylon’ with the ‘State Council of Ceylon,’ and Don Stephen represented the ‘Ceylon National Congress’ in the latter, becoming Minister of Agriculture and Lands.

The policy’s many irrigation programs guaranteed that formerly uncultivated lands were brought under agriculture. His honest efforts in establishing the policy earned him respect and admiration, and he was re-elected in 1936. He later became a minister for fifteen years, during which time he worked to modernize agriculture.

As a member of the Ceylon war cabinet and Minister of Agriculture and Lands during the ‘Second World War,’ he was instrumental in the delivery and control of food. Due to a shortage of rice due to reduced foreign supply, he began trading with Brazil and Egypt, resulting in a tenfold increase in wheat flour imports.

On December 2, 1942, he was elected ‘Leader of the House’ of the ‘State Council of Ceylon,’ a position he held until July 4, 1947. In 1942, he was appointed Vice Chairman of the Council’s Board of Ministers.
When the British Government issued the ‘Whitehall Declaration’ on May 26, 1943, discussing constitutional change in Ceylon, it drew submissions from ministers, prompting the Governor to call for a commission to halt ministerial activity.

He left the party and presented his petition for dominion status to the commission because he did not agree with the ‘Ceylon National Congress’s resolution on independence. His submissions were accepted by the commission and published in Session Paper XIV in 1944.

The ‘Soulbury Commission’ was established in 1944, and he traveled London the following year to meet George Hall, Secretary of State for the Colonies. This was followed by approval of his submissions, which resulted to Ceylon’s self-government, though not independence.

He quit his ministry in 1946, and on September 6 of same year, he founded the ‘United National Party’ (‘UNP’) by bringing together three right-leaning pro-Dominion groups from the Sinhalese, Muslim, and Tamil communities. In the same year, he declined knighthood but expressed gratitude to the British for their assistance.

His recommendations for a revision in the constitution and independence were accepted by the British government after a series of negotiations. In 1947, parliamentary elections were held from August 23 to September 20. After a few months, the country witnessed the adoption of the ‘Independence Bill of Ceylon,’ and on the 11th day of the month, he signed accords with the British government that gave Ceylon a new lease of life.

On September 24, 1947, the ‘UNP’ formed a government with the ‘All Ceylon Tamil Congress,’ and he became the first Prime Minister of Ceylon. He also served in the Ministry of Defense and the Ministry of Foreign Affairs.

He was well-liked by the majority of Ceylon’s communities while Prime Minister. He used the ‘Gal Oya’ multipurpose project to colonize uninhabited areas by resettling roughly 2,50,000 people. He emphasized the importance of developing hydroelectric power in order to mitigate the country’s lack of coal, oil, and gas deposits.

He was appointed into the ‘Privy Council’ by the British in 1950.
He also became the Minister of Health and Local Government in 1951.

He married Molly Dunuwila and had two sons with her.
Dudley Shelton Senanayake, their oldest son, was born on June 19, 1911, and followed in his father’s footsteps to become Ceylon’s second Prime Minister on March 26, 1952. Dudley Shelton went on to serve as premier for two more years.

Robert Parakrama Senanayake, the couple’s second son, was born on April 8, 1913.
Senanayake died on March 22, 1952, after suffering a stroke while riding a horse at the ‘Galle Face green.’
Rukman Senanayake, his grandson and a former cabinet member, is now a Member of Parliament. Rukman is currently the Assistant Leader of the ‘Union National Party.’

The estimated net worth of D. S. Senanayake is unknown.