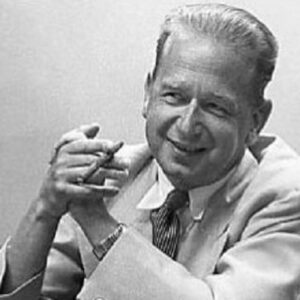 Dag Hammarskjöld was a Swedish diplomat and economist who served as the United Nations’ second Secretary-General from 1953 until he was tragically killed in a plane crash in 1961. He was the youngest Secretary-General in history and the only one to die in office. Among the best Secretary-Generals the organization has ever had, he was dubbed “the greatest statesman of our century” by US President John F. Kennedy. Hammarskjöld was highly inspired by his father’s ideas as the son of a renowned politician who subsequently became Sweden’s Prime Minister. He formed the conviction that one should devote one’s life to unselfish service to one’s country and humanity, a philosophy that would guide him throughout his career. He attended Katedralskolan and then Uppsala University before completing his legal degree. Hammarskjöld served as Secretary of a governmental unemployment committee and quickly established himself as a prominent Swedish public worker. He subsequently became Vice-Chairman of the Swedish delegation to the United Nations General Assembly in Paris and was appointed UN Secretary-General shortly thereafter in 1953. In 1961, he was posthumously awarded the Nobel Peace Prize, having been nominated prior to his death.

Dag Hjalmar Agne Carl Hammarskjöld was born in Jönköping, Sweden, on 29 July 1905, the fourth and youngest child of Hjalmar and Agnes Hammarskjöld (née Almquist). His father, a notable politician, eventually served as Sweden’s Prime Minister and as Chairman of the Nobel Foundation’s Board of Trustees.

Dag Hammarskjöld attended Katedralskolan and subsequently Uppsala University, where he graduated in 1925 with a degree in humanities. Three years later, he earned a second degree in economics.
He also studied law, earning a degree in 1930, and was appointed Secretary of a federal unemployment commission, a position he held until 1934 when he earned his doctorate in economics.

Additionally, he adored poetry, music, and painting. Additionally, he was an active young man and a capable gymnastics performer, with interests in mountaineering and skiing.

He began a successful career as a Swedish public servant in 1936, rising to the position of Secretary of the Sveriges Riksbank. He quickly progressed through the ranks and served as Chairman of the bank between 1941 and 1948.
His reputation as a diplomat grew stronger, and he was appointed financial adviser to the Swedish Ministry of Foreign Affairs in 1946. He was appointed Cabinet Secretary for the Ministry of Foreign Affairs in 1949 and deputy foreign minister in 1951. Throughout this time period, he refrained from joining any political party.

He advocated for international economic cooperation and worked on both the political and economic levels of the Council of Europe and the Organization of European Economic Cooperation.
He was instrumental in coordinating government initiatives to ease economic hardships following World War II. In 1949 and 1951, he served as a delegate to the United Nations. Hammarskjöld served as the Vice Chairman of Sweden’s mission to the United Nations General Assembly in Paris.

Dag Hammarskjöld was elected United Nations Secretary-General in 1953 for a five-year tenure. He was the first person to be unanimously elected to the position, with 57 votes out of 60. In 1957, he was re-elected.

In this post, he built his own secretariat of 4,000 administrators and specified their responsibilities through regulations. He also planned and oversaw the construction of a “meditation chamber” inside the United Nations headquarters, where people of all faiths, creeds, and religions may withdraw within themselves.

He played a critical role in efforts to normalize relations between Israel and the Arab governments. In 1955, he traveled to China to arrange the release of 11 captive US pilots from the Korean War. He was also instrumental in defusing the 1956 Suez Canal crisis.

He oversaw the establishment of the UN Observation Group in Lebanon and the UN Office in Jordan in the late 1950s, resulting in the removal of American and British forces stationed there to deal with the problems.

He was widely praised and regarded for his devotion to peace throughout the Congo’s civil war and made four journeys to the newly independent African country to address the nation’s numerous social and political challenges.

Hammarskjöld was appointed head of the UN peacekeeping force’s operations. However, the Soviet Union condemned his efforts and demanded his resignation. However, he persisted in his efforts and refused to quit under duress.

Dag Hammarskjöld was awarded the Nobel Peace Prize posthumously in 1961, having been nominated before to his death. The Nobel committee complimented him for establishing an efficient and autonomous UN Secretariat and for taking an independent stance toward the great nations.

Dag Hammarskjöld was widely considered to be homosexual, yet no clear evidence exists to support this.
He discovered during the Congo conflict that fighting had broken out between Katanga troops and UN noncombatant forces.

On 18 September 1961, shortly after midnight, Hammarskjöld was on his way to negotiate a cease-fire when his jet crashed near Ndola, Northern Rhodesia (now Zambia), killing him and 15 others. Recent information indicates that the plane may have been shot down.

The United Nations Security Council established the Dag Hammarskjöld Medal in 1997 to honor and commemorate individuals who have died in UN peacekeeping missions.

Dag Hammarskjold’s estimated net worth is $ USD 8 million, with the majority of his income coming from his work as a poet, writer, economist, politician, and diplomat.