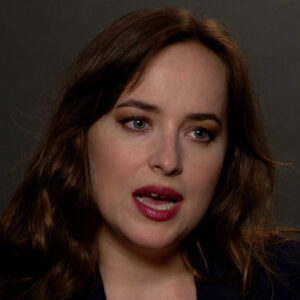 Dakota Mayi Johnson is an American actress and model who is best known for portraying Anastasia Steele in the erotic-romantic-drama film “Fifty Shades of Grey” and its two sequels. Dakota made her screen debut in the 1999 film ‘Crazy in Alabama,’ directed by her stepfather Antonio Banderas, as the daughter of actors Don Johnson and Melanie Griffith and the granddaughter of actress Tippi Hedren. Her mother starred alongside her half-sister Stella Banderas in the film. In 2006, she was named Miss Golden Globe. She started her modeling career with IMG Models. She began her acting career after graduating from high school, signing with William Morris Agency. ‘The Social Network,’ a 2010 American biographical drama film, was her first box-office success, followed by films like ‘Beastly,’ and ’21 Jump Street.’ Her big break came when she was cast as Anastasia Steele in the film ‘Fifty Shades of Grey,’ which went on to become a worldwide smash success and earned her international notoriety. She gained even more recognition when she returned to the character in the successful sequels ‘Fifty Shades Darker’ and ‘Fifty Shades Freed.’ Dakota’s other significant works include the films ‘Black Mass’ and ‘How to Be Single,’ as well as the television series ‘Ben and Kate.’

Dakota was born in Austin, Texas, on October 4, 1989, to actors Don Johnson and Melanie Griffith. In January 1976, her parents married, and in July of that year, they divorced. They reconciled in early 1989 and married for the second time, lasting till 1996. She has two half-siblings on her mother’s side and four half-siblings on her father’s side.

Tippi Hedren, her maternal grandmother, is an award-winning American actress and former model who is well known for her work as an animal rights activist. Her maternal half-aunt Tracy Griffith, former stepfather Antonio Banderas, and paternal half-sibling Jesse Johnson are among her extended family members who are actors.

She attended the Aspen Community School in Aspen, Colorado, and then the Santa Catalina School in Monterey, California, for her first year of high school. She transferred to New Roads School in Santa Monica, California, after that.

She was a dancer when she was younger. After participating in a photo shoot for Teen Vogue alongside other children of other celebrities when she was 12 years old, she acquired an interest in modeling.

She made her cinematic debut as a child actress in her stepfather Antonio Banderas’ American comedy-drama ‘Crazy in Alabama.’ Her and her half-sister, Stella Banderas, starred as the daughters of their real-life mother, Melanie Griffith, in the film, which was released on October 22, 1999. However, the picture was a box office flop.

She was named Miss Golden Globe 2006, a title she shared with her mother in 1975. Dakota was the first second-generation Miss Golden Globe in the Golden Globe Awards’ history. In the same year, she signed with IMG Models.
She began her acting career after graduating from high school, signing with the William Morris Agency.
In 2009, she modeled for the MANGO jeans line, and in 2011, she traveled to Sydney, Australia, to film the ‘Wish’ fashion label’s ‘Rising Star’ campaign.

In the critically and commercially acclaimed 2010 American biographical drama film ‘The Social Network,’ she played Amelia Ritter. This David Fincher picture, which starred Jesse Eisenberg, Andrew Garfield, and Justin Timberlake among others, received a slew of prizes, including three Academy Awards.

She made her television debut in the Fox comedy series ‘Ben and Kate’ while also appearing in films. In the series, she played one of the two eponymous characters, Kate Fox, alongside Nat Faxon, who played the other titular character, Ben Fox. The series aired from September 25, 2012, to January 22, 2013, and was produced by 20th Century Fox Television and Chernin Entertainment.

She had an appearance in the ‘Finale’ episode of ‘The Office,’ an American comedy television series. After an hour-long series retrospective, NBC aired the final episode of the series on May 16, 2013.

She played Em in the American comedy film ‘Date and Switch,’ which was released on February 14, 2014. Nicholas Braun, Zach Cregger, and Hunter Cope also starred in the film. She also played Imogen in William Shakespeare’s play ‘Cymbeline’ in a 2014 American film adaptation. She triumphed against Shailene Woodley, Danielle Panabaker, Lucy Hale, Elizabeth Olsen, and Felicity Jones to win the starring part of Anastasia Steele in the Sam Taylor-Johnson directed American erotic-romantic-drama film ‘Fifty Shades of Grey.’ She featured alongside Jamie Dornan in the film, which was based on E. L. James’ 2011 novel of the same name.

‘Fifty Shades of Grey’ premiered at the 65th Berlin International Film Festival on February 11, 2015, and was released in theaters on February 13, 2015. The picture received mostly unfavorable reviews, yet it was a major commercial success, generating a whooping $571.1 million worldwide and shattering multiple box office records. Dakota rose to fame as a result of it, gaining her international exposure and stardom.

On February 15, 2015, she appeared on the 40th anniversary special of the American late-night live television variety show Saturday Night Live, as well as hosting an edition of the show on February 28 of same year.

She appeared alongside Johnny Depp, Kevin Bacon, and Benedict Cumberbatch in the ensemble cast of the American biographical crime drama film ‘Black Mass.’ On September 4, 2015, the film premiered at the 72nd Venice International Film Festival, and on September 18, 2015, it was distributed theatrically worldwide. It was a critical as well as a commercial success.

In 2015, she appeared in the films ‘A Bigger Splash’ and ‘Chloe and Theo,’ as well as the short films ‘In a Relationship’ and ‘Vale.’

She acted alongside Rebel Wilson, Alison Brie, Leslie Mann, and Nicholas Braun in the American romantic comedy film ‘How to Be Single,’ in which she played Alice Kepley. The film was released in the United States on February 12, 2016, and it became a box office smash, grossing $112.3 million.

She gained even more prominence when she reprised her role as Anastasia Steele in the ‘Fifty Shades of Grey’ sequel, ‘Fifty Shades Darker.’ The film was released in the United States on February 10, 2017 and, like its predecessor, was a box office smash, grossing $381.1 million.

This was followed by ‘Fifty Shades Freed,’ the third and final installment in the Fifty Shades film series, in which she reprised her role as Anastasia. The film was released in the United States on February 9, 2018, and it became the fourth highest-grossing film of the year, grossing $365.3 million.

The drama thriller ‘Bad Times at the El Royale,’ the horror picture ‘Suspiria,’ and the adventure film ‘The Peanut Butter Falcon’ are among Dakota’s upcoming films in which she will star.

Dakota has previously been linked to actors Jordan Masterson and Noah Gersh. For two years, she dated Matthew Hitt, a model and lead vocalist and guitarist of the indie rock band ‘Drowners.’ According to sources, she began dating Chris Martin, the lead singer of Coldplay, in late 2017.

Dakota Johnson has a net worth of $14 million dollars.