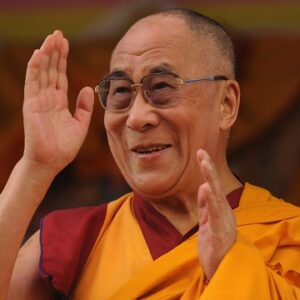 Tenzin Gyatso, the 14th and current Dalai Lama, is Tibet’s spiritual and political leader. He is the world’s oldest living Dalai Lama. Dalai Lamas are reincarnated souls in the line of tulkus, who are regarded incarnations of the bodhisattva of compassion. They are the head monks of the Gelugpa tradition of Tibetan Buddhism. Dalai Lamas, the spiritual leaders of Tibetan Buddhism and followers of the Bodhisattva tradition, are claimed to devote their entire lives to the advancement of humanity. Instead of obtaining ‘nirvana,’ these souls chose to be reincarnated for the good of society and mankind. The name Dalai Lama is derived from the Mongolian word Dalai and the Tibetan word lama. The former denotes the ocean, whereas the latter denotes a teacher. There have been 14 Dalai Lamas since 1391, from the first Gedun Drupa to the current Tenzin Gyatso. Returning to the 14th Dalai Lama, he was chosen at the age of two and legally recognized at the age of fifteen. Fearing assassination, he escaped Tibet and settled in Dharmasala, Himachal Pradesh, with thousands of refugees. He founded the Tibetan Parliament in Exile and has been a global advocate for Tibetan rights. He has worked to create Tibet an independent and democratic state, free of the People’s Republic of China’s domination, since his enthronement. He preaches and practices the value of nonviolence and peace, as well as the virtue of compassion. He was awarded the Nobel Peace Prize for his exceptional achievements and unwavering commitment to peace.

Lhamo Donrub, as he was then baptized, was the fifth of sixteen children born to a farming family in a small hamlet in Takster, Amdo, north-eastern Tibet. He was one of the seven children that made it through childhood.
If tales are to be believed, Lhamo was intercepted as the reincarnation of the 13th Dalai Lama, Thubten Gyatso, by a plethora of omens and spiritual indicators.
The head of the 13th Dalai Lama’s preserved body, which was facing southeast when discovered, had magically turned northeast, foreshadowing the direction in which his successor would be found. Later on, the Regent, Reting Rinpoche, had a vision that pointed to Amdo as the location of the successor.
When young Lhamo was shown different relics, some of which belonged to the 13th Dalai Lama and others did not, he promptly recognized those that belonged to his predecessor. At the age of two, Lhamo was proclaimed the 14th Dalai Lama and given the name Tenzin Gyatso.
Gyatso was not enthroned until he was fifteen years old. As a result, until that time, the Regent served as the head of the Tibetan parliament, or Kashag.
Gyatso began his monastic schooling when he was six years old. His junior teacher was Yongdzin Trijang Rinpoche, and his senior teacher was Yongdzin Ling Rinpoche.
His Holiness (as he is referred to on the Dalai Lama website) took his final test in Lhasa’s Jokhang Temple during the annual Monlam or prayer Festival when he was 23 years old. He received the Geshe Lharampa degree, which is akin to a doctorate in Buddhist philosophy, after passing the exam with honors.

Meanwhile, during Tenzin Gyatso’s childhood, relations between the People’s Republic of China and Tibet had deteriorated. The Tibetans were prevented from attaining independence by Ma Bufang. He even threatened Tibet with aerial bombing if it sought Japanese assistance.
Ma Bufang assaulted a number of Tibetan Buddhist monasteries, including the Tsang and Labrang monasteries.
The Chinese army overcame their Tibetan equivalents in 1950 and marched up to the edge of the Dalai Lama’s land, sending a delegation to the Dalai Lama. The 14th Dalai Lama ascended to His throne about a month later, taking full political power and being formally declared the temporal monarch of Tibet.
In 1950, he sent a delegation from Tibet to Beijing to ratify the Seventeen Point Agreement for the Peaceful Liberation of Tibet, which was his first major political initiative.
Four years later, he crossed the border with the 10th Panchen Lama to meet Chinese leaders Mao Zedong, Deng Xiaoping, and Chou Enlai to begin peace talks. As a delegate, he attended the first session of the National People’s Congress. Later, he was appointed deputy chairman of the National People’s Congress Standing Committee, a position he held until 1964.
The Dalai Lama was compelled to flee Tibet after the 1959 Tibetan uprising was brutally suppressed by Chinese soldiers in the Lhasa region, forcing him to flee into exile for fear of assassination. The Dalai Lama crossed the border into India with the help of the CIA Special Activities Division.
His Holiness founded the Tibetan Government in Exile at Dharamsala, a city in Himachal Pradesh’s Kangra district. ‘Little Lhasa’ became the nickname for the city. His Holiness has been residing in Dharamsala since then.
He was accompanied by about 80,000 Tibetan exiles who accompanied him on the voyage and settled in Dharamsala. His Holiness relocated them to various farming communities.
The Dalai Lama founded a Tibetan educational system to teach Tibetan youngsters the language, history, religion, and culture in order to maintain Tibetan culture and education. He founded the Tibetan Institute of Performing Arts and the Central Institute of Higher Tibetan Studies in the years that followed, both of which became the premier universities for Tibetans in India. His Holiness not only focused on teaching Tibetan culture, history, and religion to the refugees, but he also spearheaded the re-founding of various monasteries and nunneries. The latter was essentially an endeavor by him to defend and preserve Tibetan Buddhist teachings and a way of life.
Following the Chinese invasion, the Dalai Lama made appeals for Tibetan rights to the United Nations through his Central Tibetan Administration. Three resolutions were drafted as a result of the appeals, and the General Assembly adopted them in 1959, 1961, and 1965.
Each resolution aimed at China, urging it to give Tibetans with basic human rights. His Holiness furthered the cause by establishing a democratic constitution, modelled after the Universal Declaration of Human Rights of 1963. To further his cause, he established an elected parliament and an administration.
The Dalai Lama opened one of Tibetology’s most important institutions, the Library of Tibetan Works and Archives in Dharamsala, to the public over seven years later. The institution, which has over 80,000 manuscripts and key knowledge resources linked to Tibetan history, politics, and culture, is a destination for anyone interested in learning more about Tibetan history and culture.
His Holiness met Pope Paul VI at Vatican City in 1973. Since then, he has paid multiple visits to Pope John Paul II, including in 1980, 1982, 1986, 1988, 1990, and 2003.
He is also said to have engaged in substantial interfaith conversation with Jewish individuals. While he initially met them at Dharamshala, where a team of Jewish professors had arrived, he also traveled to Israel three times and met with the country’s Chief Rabbi.
He traveled all the way to Washington, D.C. in 1987 to speak at the Congressional Human Rights Caucus, where he talked about Tibet becoming a “zone of peace,” or a sanctuary where enlightened people may withdraw and live in peace without nuclear weapons.
The strategy, which was primarily hazy and ill-defined, evolved into a proposal, which became known as the ‘Strasbourg Proposal’. He advocated for a self-governing Tibet ‘in collaboration with the People’s Republic of China,’ according to it. The Tibetan Government in Exile, however, rejected the plan in 1991 due to the Chinese leadership’s opposition to the proposal.
In 2007, the Dalai Lama attended the Board of World Religious Leaders’ Third Meeting in Amritsar, India. He came there to explore the topic of love and forgiveness as a member of The Elijah Interfaith Institute’s Board of World Religious Leaders. The Dalai Lama has taught at a number of different universities in the United States. He was named Presidential Distinguished Professor at Emory University in Atlanta, Georgia, for the first time. Following that, he lectured at the University of Michigan, taught at Lehigh University, and delivered a public talk at Colgate University.

Opinions and Points of View on Social Issues

His Holiness the Dalai Lama has strong opinions on a variety of societal issues. To begin with, he is a staunch supporter of democracy and nonviolence, and he sees himself as India’s envoy, primarily assisting in the promotion of nonviolence and religious harmony. He imagines a future in which tolerance and discourse take precedence over violence and strife.
The Dalai Lama’s stance on abortion isn’t very strict. Though he condemns the conduct and considers it sacrilegious, he believes it is ethically justifiable in some circumstances, such as when the unborn child may be retarded after birth or when there is a risk of death during pregnancy.
On the economic front, His Holiness is a fervent believer in authentic Marxist policies, as opposed to those employed by some governments. Marxism, he says, is the only economic theory that is concerned with equitable wealth distribution and use of the means of production. It also gives equal weight to all social classes, from the working class to those who are disadvantaged and victims of exploitation in the minority class.
The Dalai Lama is a prominent supporter of environmental protection. He has given countless presentations about the issue all across the world. He is committed to environmental protection and wildlife conservation.
Other social issues that have piqued His Holiness’ interest include women’s rights and health. While he declares himself a feminist and argues that because of their caring nature, women have the ability to build a compassionate world, health is also paramount, and only a healthy lifestyle can assist achieve peace of mind, body, and spirit.

In 1989, he was awarded the Nobel Peace Prize for his nonviolent efforts toward Tibet’s liberation.
The Buddhist Society in the United Kingdom presented the Dalai Lama with the Christmas Humphreys Award in 2005. His Holiness is a saint. The Dalai Lama is the happy winner of the Congressional Gold Medal, the highest civilian honor bestowed by American legislators in 2007.

One of the fourteen Dalai Lamas is said to have said, “A dirty foot is a pure foot.” He is supposed to wash his feet every six months in accordance with his views, demonstrating that he practices what he teaches.