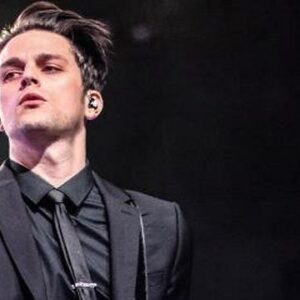 Dallon James Weekes is a well-known musician and composer from the United States. He is most recognized for his work with the multi-platinum selling band ‘Panic! at the Disco’ as a backing vocalist, bass guitarist, keyboardist, and lyricist. His own musical outfit, ‘The Brobecks,’ is known for its bass guitarist, lead vocalist, and songwriter. The American musician has done a number of solo concerts during his career, in addition to participating to group collaborations. Weekes has worked on a number of hits, including ‘Skid Row (Downtown),’ ‘Iggy Pop,’ ‘Mean Ol’ Moon,’ and ‘Please Don’t Jump,’ to name a few. He has established a significant name and reputation for himself throughout the years. He is well-liked not only in the United States, but also in other countries. He has a sizable social media following, which is unsurprising. Dallon Weekes is married and has two children in his personal life.

Dallon Weekes was born into a Mormon family on May 4, 1981 in a little village in Verona, Missouri, United States. He grew up in the town of Clearfield, Utah. He attended Clearfield High School, where he graduated with honors in 1999. After graduating, Weekes worked as a full-time Mormon missionary in Oklahoma for two years. He later attended Weber State University for a brief while before dropping out to pursue a career in music.

After returning to Utah, Dallon Weekes and a few of his pals established the band the Brobecks. The band began by recording basement demos and touring. Weekes was offered solo album projects from Interscope Records, Indie Label, and Sony BMG after a few years. Weekes was required to perform solo and drop his band mates as a requirement of his solo contracts, which he declined.

The band’s CD ‘I Will, Tonight EP’ was released in 2008. Their track, ‘Second Boys Will Be First Choice,’ was included to the daily rotation of Salt Lake City radio station X96 around that time. The song climbed to the top of the daily top songs chart within two days of its release and stayed there for thirteen days. The Brobecks released an album called “Violent Things” in 2009. Weekes published the ‘Quiet Title EP’ three years later, which featured two songs: ‘Cluster Hug’ and ‘Anyone I Know.’

In 2009, Dallon Weekes joined the band ‘Panic! at the Disco’ as a bassist and backup vocalist. He was admitted as a replacement instrumentalist at first, but became a full-time member in 2010 while on tour in China with the band. Weekes’ permanent status was also unclear to the public until he announced it via Twitter in 2012. The band’s album, ‘Vices & Virtues,’ was released in 2011, and the American musician contributed to it. He also contributed to the project’s cover art and even appeared on the album’s cover. He wrote songs for the band’s fourth album, ‘Too Weird to Live, Too Rare to Die,’ two years later, in 2013. Weekes parted ways with the band’s official lineup in October 2015.

In September 2010, Dallon Weekes released the single “Skid Row,” which was made available for free online download. Then, in 2014, he released ‘Sickly Sweet Holidays,’ his Christmas single. Ryan Seaman, a percussionist, and Tyler Joseph, a backup vocalist, were featured on this track. He released the song ‘Teenage FBI’ the following year, followed by his second Christmas single, ‘Please Don’t Jump (It’s Christmas)’ in November 2016. In 2015, he created a cover series called ‘TWOMINCVRS,’ in which he uses his own YouTube account to self-release versions of songs with a duration of two minutes or less.

At the Alternative Press Music Awards, Dallon Weekes was nominated for the ‘Best Bassist Award’ (2015). Aside from the accolades bestowed by the business, the musician has received a great deal of love and admiration from his fans all around the world. Dallon Weekes has amassed millions of followers on social media and beyond. He has 426k and more than 281k followers on Instagram and Twitter, respectively, as of May 2017.

In 2006, Dallon Weekes married his longtime girlfriend Breezy Douglas. Knox Oliver Weekes, a son, and Amelie Olivia Weekes, a daughter, are the couple’s children. Weekes is also recognized for his religious and altruistic tendencies. He is a member of the Latter-day Saints’ ‘Church of Jesus Christ’ (LDS Church).

Dallon Weekes has a net worth of $4 million as a musician, singer, and composer in the United States. In May 1981, Dallon Weekes was born in Salt Lake City, Utah. He is most known for being the band Panic! at the Disco’s bass guitarist, background vocalist, and lyricist.