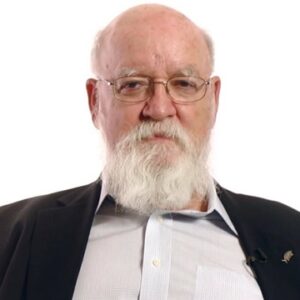 Daniel Dennett is an American philosopher and author whose groundbreaking work in the philosophy of mind, philosophy of science, and philosophy of biology, notably in the areas relating to evolutionary biology and cognitive science, has generated considerable interest throughout the globe. He was raised in Boston, Massachusetts, and was first exposed to philosophy when he was 11 years old. Since then, he has been drawn to the topic and has continued his education in it. He earned his doctorate in philosophy in 1965 and began teaching at UC Irvine shortly after. He later assumed the role of University Professor at the University of Tufts, a position he has held ever since. Additionally, he holds the position of Austin B. Fletcher Professor of Philosophy and co-director of the Centre for Cognitive Studies. He is regarded as one of the Four Horsemen of New Atheism and an outspoken atheist. He also serves on the advisory board of the Secular Coalition for America.

In Boston, Massachusetts, Daniel Dennett was born to Ruth Marjorie and Daniel Clement Dennett Jr.
The majority of young Dennett’s childhood was spent in Lebanon, where his father was a covert counterintelligence agent for the Office of Strategic Services, posing as a cultural attache at the American Embassy.

He moved back to Massachusetts when he was five years old after his father perished in an unknown plane crash. He first learned about philosophy when he was 11 years old, at a summer camp.
After attending Philips Exeter Academy, he enrolled at Wesleyan University for one year. He graduated from Harvard University with a Bachelor of Arts in philosophy in 1963.

He attended at Oxford University after completing his graduate work to continue his studies there under Gilbert Ryle. He graduated in 1965 with a doctorate in philosophy. He belonged to the university’s Hertford College while he was a student.

He began teaching at UC Irvine for six years, from 1965 to 1971, after receiving his doctorate. After then, he relocated to the University of Tufts, where he has been a Professor ever since.

He is also the Austin B. Fletcher Professor of Philosophy and co-director of the Center for Cognitive Studies.
He produced a number of works while continuing to teach, the first of which being “Brainstorms: Philosophical Essays on Mind and Psychology.” The book, which was published in 1978, discusses artificial intelligence and builds on it to establish his theories about consciousness.

The works “The Mind’s I: Fantasies and Reflection on Self and Soul” and “Elbow Room: The Varieties of Free Will Worth Wanting” followed this, both of which were created by him. The latter addressed determinism and free will-related philosophical difficulties.

He created the phrase “intentional posture” to express the amount of abstraction and mental qualities that we see regarding the behavior of things when working on the philosophical theories relating to mind, biology, and science. He developed the physical posture, design stance, and purposeful stance as three levels of abstraction.

He created the piece “Awareness Explained” in 1991, in which he discussed how mental and physical processes in the brain result in the emergence of consciousness. He outlined the multiple drafts model of consciousness in the book.
Beginning in the 1990s, he focused a lot of his work on the evolutionary controversy, focusing on what sets the human mind apart from that of animals and how free will is consistent with a naturalistic worldview. He introduced certain ideas that had a significant impact on Geoffrey Miller, an evolutionary psychologist.

He published Darwin’s Dangerous Idea in 1995, his magnum opus, in which he attacked the Darwinism theory of evolution, which claimed that natural selection was a mechanical and algorithmic process. The book was shortlisted for the 1995 National Book Award for nonfiction and the 1996 Pulitzer Prize for general non-fiction before moving on to become a finalist in both categories.

He published a book in 2003 called “Freedom Evolves” that developed the ideas covered in “Intentional Stance,” “Elbow Room,” and “Consciousness Explained.” His opinions on consciousness and personhood were in line with the book’s theory of free choice and moral obligations.

Some of his subsequent publications are Sweet Dreams: Philosophical Barriers to a Science of Consciousness, Neuroscience, and Philosophy: Brain, Mind, and Language, Science and Religion, Intuition Pumps and Other Tools for Thinking, and Inside Jokes: Using Humor to Reverse-Engineer the Mind.

He holds three fellowships: one from the Center for Advanced Studies in Behavioral Science, two from the Guggenheim Foundation. He is also the happy recipient of a Fulbright Fellowship. He belongs to the Committee for Skeptical Inquiry as a Fellow.

He was voted Humanist of the Year by the American Humanist Association in 2004. The International Academy of Humanism even awarded him the title of Humanist Laureate.

In 2010, he was added to the Honorary Board of Distinguished Achievers of the Freedom From Religion Foundation.
He was awarded the Erasmus Prize in 2012 in recognition of his efforts to communicate the cultural value of science and technology to a broad audience.

In 1962, he became legally wed to Susan Bell. The couple is the proud parents of a son and a girl. They are North Andover, Massachusetts, residents.

Few people are aware that he is also an ardent sailor in addition to being a philosopher.
He is an active member of the Brights movement and a secularist who serves on the Secular Coalition for America Security Board.

He is a staunch atheist and, together with Richard Dawkins, Sam Harris, and the late Christopher Hitchens, is frequently called one of the “Four Horsemen of New Atheism.”

One of the wealthiest and most well-known philosophers is Daniel. The sources we looked at for this estimate were Wikipedia, Forbes, and Business Insider. Daniel Dennett’s net worth is roughly $1.5 million.

One of the “Four Horsemen of New Atheism,” he is an American philosopher and cognitive scientist.