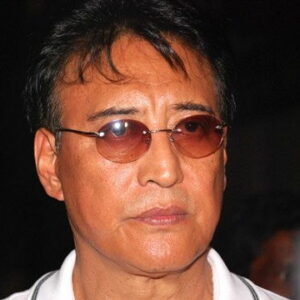 Tshering Phintso Denzongpa, often known as Danny Denzongpa, is an Indian actor, director, and singer of Sikkimese and Bhutanese origin. He has acted in a number of Bollywood films as well as Tamil, Nepali, and Bengali movies over the course of his career, which spans more than four decades. He’s also been in a few international films, the most well-known of which is ‘Seven Years in Tibet,’ in which he co-starred with Brad Pitt. ’36 Ghante,’ ‘Agneepath,’ ‘Khuda Gawah,’ ‘Bandish,’ and ‘Ghatak,’ to name a few of his notable Hindi film performances. Denzongpa, who was born into a Buddhist family in Gangtok, grew up dreaming of joining the Indian Army. He’d also met the requirements for entrance to an armed forces college. He did, however, withdraw his acceptance to the Film and Television Institute of India. With his wife and two children, he eventually relocated in Mumbai. Denzongpa is also a talented singer who has shared the stage with Mohammed Rafi, Lata Mangeshkar, and Kishore Kumar, among others. He is also a painter, sculptor, and writer. He was awarded the Padma Shree, India’s fourth highest civilian honor, in 2003 for his contribution to Indian cinema.

Danny Denzongpa first appeared in a Hindi film in 1971, K.R. Ishara’s ‘Zaroorat.’ He received his big break in the film ‘Mere Apne,’ in which he played a good guy. His first antagonist role was as a disgruntled and crippled husband in B. R. Chopra’s 1973 film ‘Dhundh,’ in which he played a furious and crippled husband.
In the 1970s, Denzongpa had more favorable parts in films such as ‘Sangram,’ ‘Kaala Sona,’ and ‘Lahu Ke Do Rang.’ He was also cast in negative roles in films like ‘Fakira,’ ‘Aashiq Hoon Baharon Ka,’ ‘Kalicharan,’ ‘Chor Machaye Shor,’ ‘Devata,’ ’36 Ghante,’ and ‘Paapi’ at this time.
Denzongpa made his directorial debut with the suspense-horror film “Phir Wahi Raat” in 1980, in which he also acted. The film was hailed as one of Hindi cinema’s top five best horror suspense films. In the same year, he played Randhir in ‘The Burning Train’ and played Kapil Kumar in ‘Bandish.’
In the romantic film ‘Love Story,’ he played Kumar Gaurav’s father-in-law Ram Dogra, and in 1981, he acted in the feature ‘Hum Se Badkar Kaun.’
In 1984, he appeared alongside Mithun Chakraborty, Tanuja, Rati Agnihotri, and Sharat Saxena in Raj N. Sippy’s ‘Boxer.’
In 1985, he reprised his role as the renowned biker-gangster Balbir in the film ‘Aandhi Toofan.’ Following that, he played the slum crime lord Shambu in ‘Bhagwaan Dada,’ a film about a criminal who undergoes a transformation as a result of his love for a child.
Denzongpa was cast in the crime drama ‘Agneepath’ as a supporting character. He appeared in films such as ‘1942: A Love Story,’ ‘Krantiveer,’ ‘Vijaypath,’ and ‘Ghatak: Lethal’ in the mid-1990s. During this time, the Indian actor also played alongside Brad Pitt in the American biographical war drama film ‘Seven Years in Tibet.’
In Rajkumar Santoshi’s ‘China Gate’ (1998), he played Maj. Ranjir Singh Gurung, who had a hit item number called “Chamma Chamma.” The actor went on to star in the action spy thriller ’16 December’ and the war picture ‘Ab Tumhare Hawale Watan Saathiyo’ in the years that followed.
He appeared in films such as ‘Frozen,’ ‘Hattrick,’ ‘Big Brother,’ ‘Karzzzz,’ and ‘Boss’ in the 2000s. Denzongpa starred as Home Minister Dashrat Singh in the big-budget film ‘Jai Ho,’ which also starred Salman Khan. In the popular film ‘Baby,’ he co-starred with Akshay Kumar as a coordinator named “Feroz Khan.” In the film’s spin-off prequel, ‘Naam Shabana,’ he repeated his role.
‘Manikarnika: The Queen of Jhansi,’ an epic biographical period drama film based on the true life of Rani Lakshmi Bai of Jhansi, featuring the actor as Ghulam Ghaus Khan in 2019.

Danny Denzongpa appeared in the films ‘Sanam Bewafa’ and ‘Khuda Gawah’ in the early 1990s. He received two Filmfare Awards for Best Supporting Actor for his roles as Sher Khan and Khuda Baksh, respectively.

Danny Denzongpa and his wife Gawa currently reside in Mumbai. Rinzing and Pema are their two children.

Danny Denzongpa has a net worth of $30 million.