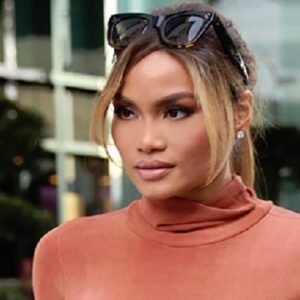 Model, actor, host, and businesswoman from the Philippines is Daphne Joy. She started off as a swimsuit model for OMG Miami Swimwear before launching her own holiday collection for Abyss by Abby Collection called Daphne Joy. Among others, she has graced the covers of Smooth Magazine, BlackMen Magazine, and SHOW Magazine. Additionally, she has been highlighted in King Magazine and the 2009 Ed Hardy Swim Campaign. Her debut television appearance was in 2007’s episode of Nick Cannon Presents: Wild ‘N Out on MTV. She later had appearances on the television shows “Curb Your Enthusiasm,” “CSI: Las Vegas,” and others. She played brief roles in the comedic horror movie “Frankenhood” and the television movie “Venice Heat.” The most notable of her cinematic roles is her mermaid role in “Pirates of the Caribbean: On Stranger Tides.” She has been seen in several music videos, such as “What You Got” by Colby O’Donis with Akon and “Miss Independent” by Ne-Yo with Jamie Foxx. Additionally, she has more than 1.1 million Instagram followers.

Since she was in elementary school, according to Daphne Joy, casting directors have contacted her. While in high school, she participated in dance ensembles, dramas, and the theater. At the age of 17, she began working as a fashion model. She starred in commercials, walked the runway for renowned fashion designers, and eventually secured the role of cover girl for several magazines geared toward men. She made an appearance as a VJ and dancer in an episode of Nick Cannon Presents: Wild ‘N Out on MTV in 2007. She has since worked on numerous TV episodes and films, including the 2011 fantasy thriller “Pirates of the Caribbean: On Stranger Tides,” in which she played the part of a mermaid. She became much more well-known after she began dating rapper 50 Cent in 2011.

Why Is Daphne Joy So Unique?

Daphne Joy, who began her career as a model, is now well-known for her roles in numerous television shows and motion pictures. She is an entrepreneur as well and just recently debuted her own line of swimwear. Few people are aware, though, that she enjoys throwing parties and has previously emceed significant celebrity occasions. She has acted as a model for philanthropic events like the yearly Celebrity Catwalk, which promotes awareness of canine and feline abuse. She respects Philippine culture and values as a result of her upbringing there. She prefers to keep a quiet profile despite being incredibly well-liked. She enjoys Filipino cuisine and is an excellent cook. She also enjoys traveling, but her fear of heights limits the places she can go on vacation and prevents her from going on rollercoasters or skydiving. She nevertheless hopes to someday learn how to fly a plane in order to conquer her fear of heights.

Past Fame of Daphne Joy

Daphne Joy has a notorious dating history and has been connected to several notable people throughout the years. The specifics of her relationship with the much older Finnish-Canadian businessman Peter J. Nygrd are unknown, although he was one of her first hookups. She had a fleeting romance with American actor Tyrese Gibson in 2011. She soon began dating 50 Cent, a rapper whose full name is Curtis James Jackson III. It lasted for more than one and a half years, making it one of her longest relationships. Sire Jackson, a child she had with the rapper, was even born in 2013. When she accused him of assaulting her at home, their relationship took an unexpected turn. On June 23, 2013, he allegedly broke into her Toluca Lake condo and assaulted her bodily. Before leaving, he also allegedly ruined $7,100 worth of stuff. He was accused by police of four charges of vandalism and one case of domestic violence. After he entered a no-contest plea to a misdemeanor mischief charge, the domestic violence allegations were ultimately withdrawn. The rapper, who at first refused to even admit having a child with her, recently endorsed her swimsuit line on Twitter, referring to her as the mother of his child and igniting suspicions of their reconciliation. It appears that things have improved for the couple since that time. Daphne, who dated Jason Derulo from November 2015 to May 2016, made the decision to end their relationship amicably in the interim. She apparently spent a brief time in a relationship with reality TV star Rob Kardashian in late 2013.

On February 8, 1987, Daphne Joy Cervantes Narvaez was born in Olongapo, Philippines. Her mother was from the Philippines, while her father was originally from Puerto Rico. She spent a large portion of her youth in the Philippines before moving to Los Angeles with her family when she was 7 years old. She performed in talent events while in high school and was a member of the cheering squad, dance teams, and choir plays. She is a single mother right now.

Daphne Joy prides herself on being a foodie but believes she is fortunate to have a healthy metabolism that prevents her from putting on weight.